We are five gin & tonics into Sunday night and it’s time to start my first installment of “Spin it Sunday” in which I…well, I spin a record from my collection. Granted, I left almost my entire collection behind in the US, so this series won’t last too long.

Tonight’s record is by the jazz pianist Vince Guaraldi (known for his work in the Charlie Brown films) and Brazilian guitarist Bola Sete. The 1963 album :Vince Guaraldi, Bola Sete and Friends.

The album’s first track is “Casaba,” which is apparently a type of winter muskmellon. That doesn’t really make any sense, so I have turned to the trusty Google Translate. Apparently it doesn’t mean anything in Portugese, but in Spanish it means “married.” Either way, this song is the epitome of cool. It’s immediate how different Sete and Guaraldi’s styles are, but they are so well matched for each other.

“Mambossa” is the longest piece here. But it’s beautiful. Like how a man would describe a woman (assuming he had class) or what it feels like to stay in a fancy hotel with chandeliers that are not made from plastic.

I was reading about Guaraldi’s death as “Star Song” began to play. He passed away in 1976 at the age of 47. It’s a strange song to read the story to. In a way it feels so beautiful. As much as everyone loves a rock star, nothing is more tragic or heart breaking than jazz. 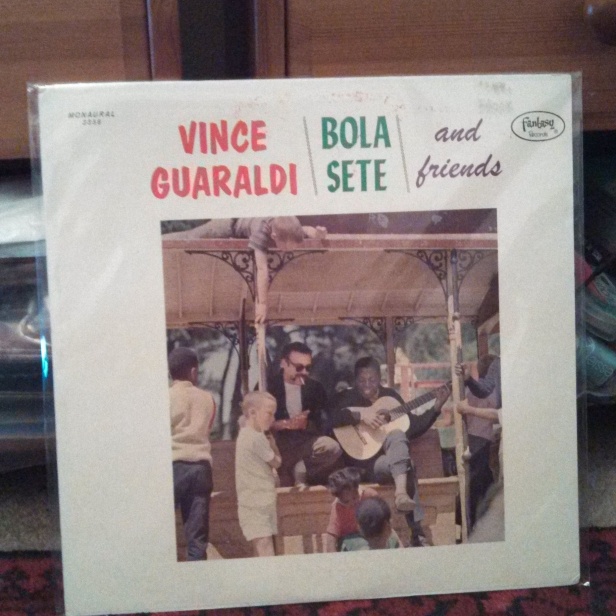 With that, the next song is “Moon Rays.” The astronomical theme carries so well on the second side of this album. This might be my personal favorite off the album, but to be fair – I think that about every song that plays.

One thing that’s really great about buying vinyl is seeing how much work went into producing the physical copies themselves. The back side of the sleeve contains a story of how the album came to be. Apparently “Mabossa” comes from the combination of mambo and bossa nova. But this was the highlight of the tale how Guaraldi and Bola came to be:

“After the date, listening to the tape and Bola’s clean, strikingly personal sound, Vince struck a cigarette in his ear, twisted around on the chair, quickly snapped his finger under his mustache and said, “That’s background music to life! You could hear a baby crying under that. It’s just great.”

Tonight’s album closes with the beautiful cover of “Days of Wine and Roses.” It’s almost like a lullaby and a soft good night from the musicians. Enough to make me want to curl up and sleep off all this gin.