Welcome to the intergalactic world of Gary Numan and his Tubeway Army. It’s Spin it Sunday and I’m indulging in 1978’s Tubeway Army.

This album is what I would consider a rather fast moving album. Free of clutter and un-needed brush: it moves through each track without hesitation. The first two opening tracks “Listen to the Sirens” and “My Shadow in Vain” create one of the best openings of any post-punk album (or should we call it synth-pop?).

At this point in Numan’s career, there’s a lot less originality. Fairly standard funk bass-lines, but Numan’s astounding voice stands between him and everyone else. If you’re familiar with Numan’s career, there are subtle hints of his signature synth sound that comes through distinctly on certain tracks like “Something’s in the House.”  Sometimes looking backwards on a musician’s career is the best way to look at them.

When the album finally creaks onto “Every Day I Die” side A is slowing to stop. It’s not great. But the good news is, a Sci Fi feature will be on Side B. 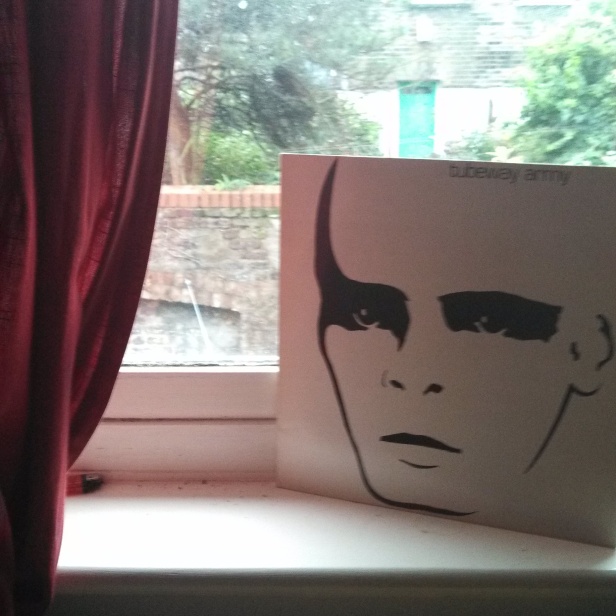 “Steel and You” is a gem on the album. Particularly for it’s lyrics: “Just my steel friend and me. I stand brave by his side. This machine is all I live for.” My boyfriend is off on about Isaac Asimov and Philip K. Dick. I’m assuming this is what this track is supposed to make us think about. You know, “Look I’m in a space ship with only aliens and robots as friends!”

I say it’s more atmospheric. Boyfriend says menacing. Side B is getting samey. Not in a great way. “Are You Real?” is making everyone (all two of us) cringe slightly. Not saying that there are plenty of amazing stand alone tracks. Maybe we’re too busy thinking about chocolate souffles.

Unfortunately, the space exploration of the album only picks up at the last two tracks. “Zero Bars (Mr. Smith)” has us searching through asteroid belts once more before turning out for the night.

On a final note, Tubeway Army isn’t that solid of an album, but it’s certainly a promising debut that lead way to the classic Replicas. Definitely worth a listen for a trippy space ride, but maybe it’s best just to stick to Earth.