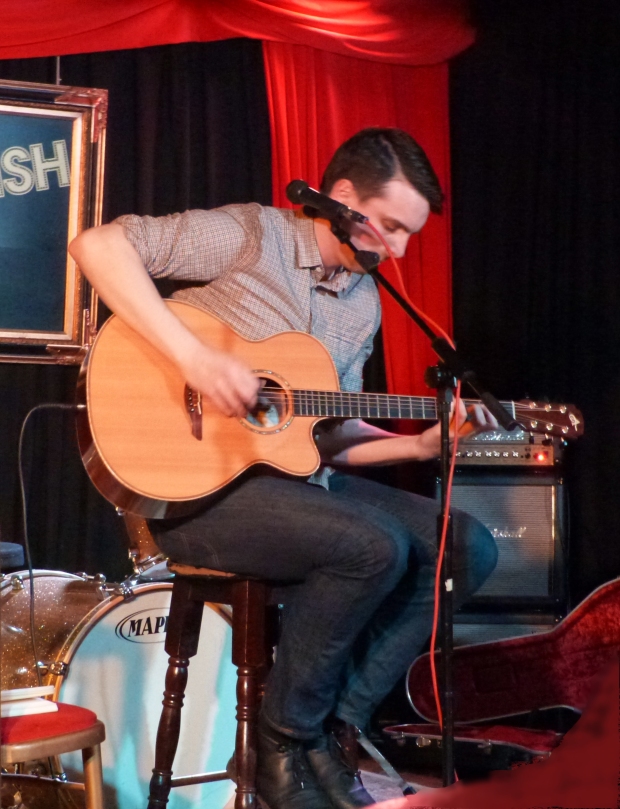 It is Friday night at the Cavendish Arms in Stockwell. A venue that doubles as a bohemian, relaxed and trendy pub in one room and a platform for emerging musicians in another.

The front room is buzzing with post-work conversation. Pints are being poured at the bar. The squishy leather sofas and small fireplace create a cosy atmosphere. There’s a small organ off to the side, but it’s not being played tonight. In the next room there is no patterned carpet or wallpaper, just a completely black room with a small stage.

On stage, Adam White is propped up on a stool. Even sitting he towers over everyone else in the room. He looks completely comfortable on stage as he takes a drink from his pint of Guinness.

White is an acoustic musician now based in London. He’s is a long way from home, a distinctive accent betrays his roots in Barnsley, South Yorkshire. His early days were spent with a family that always had music around. His parents played a mix of folk music, The Police and Queen.

He began writing music when he was 16. After high school he played gigs with a post-grunge band called One Weak Lifetime. Barnsley lacked the places to play. So White moved down to London at 22, young enough to move to a new city without any strings attached.

“I used to suffer from stage fright,” says White. “It was an obstacle I overcame. Before, I was always on edge.”

The stage fright wasn’t present at the Cavendish Arms. Instead, there is a singer with a dynamic voice and plucky guitar. The post-grunge days have been left behind and the music has become mellowed Americana in style. While his music sounds like British folk, he says there’s that signature ‘story telling’ aspect missing. Instead, White’s lyrics focus on emotions that are accessible to his audience.

White says, “I don’t really care about the money. I want people who want to listen.”

He’s working on an EP now after scrapping the idea of making a full-length album. While he admits it takes lots of time that he doesn’t always have outside of work, he still makes the time to record and has even begun work with a producer.  The work of making an EP is always a challenge when life doesn’t allow full-time recording.

White says, “I would love to do music full-time, but there is no money in music. The musicians always get shafted.”

Along with his new EP, White has been working with an ever-expanding group of venues and fellow musicians to help, and playing a series of gigs in a tour of London.

White closes his set with the bouncing and swaying ‘You’re on my Mind.’ When he leaves the stage, a band with a keytar take his place. Style and melody has clearly left for the night, but White has left his mark.

The Age of To and Fro is now available on iTunes.