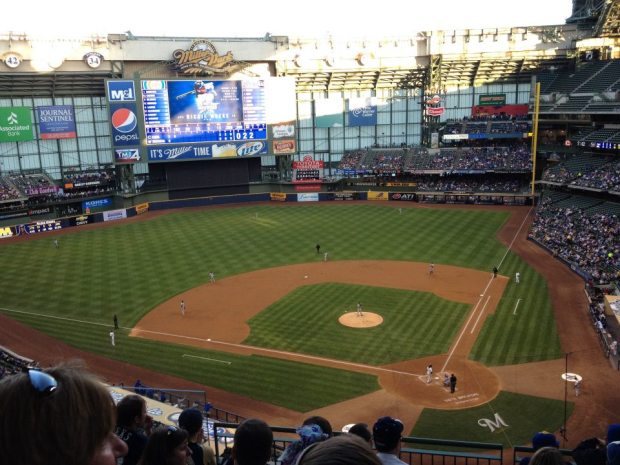 I have been a Brewer’s fan for years. One of the best things about moving to Milwaukee for my undergrad degree was being able to go to countless baseball games at Miller Park at ticket prices that are as cheap as chips. Today is opening day and I’ll miss being in the stands with a hotdog and a massive cup of beer. To celebrate the beginning of the amazing season, here’s my article published on Westminster News Online. The British Baseball Federation’s National Baseball League has been doing really well in recent years and it has been fascinating learning about the international spread of our favourite sport. Happy Opening Day to everyone!

Spring is slowly arriving, and across the pond it will have escaped no one’s attention that baseball’s Opening Day is here.

For the UK’s sporting landscape, this registers no more than a minor blip on the sporting radar. There is a clear market for American sports in the UK. Both the National Basketball Association (NBA) and the National Football League (NFL) have seen exceptional growth over the past decade.

Baseball has long been considered the great American pastime, but over the decades the sport has crossed the Pacific Ocean with great success with franchises in Australia and to an even bigger extent Japan. In fact they have twice hosted the baseball World Series Champions (both in 2006 and 2009), and have produced some of the biggest global stars in recent years for Major League Baseball (MLB).

The notion that baseball is an insular game then may not be quite correct. In speaking with those involved in the sport inside the UK it becomes clear that there is deeper history on these shores than many would realise.

Bob Fromer is with BaseballSoftball UK.

Fromer says, “In the early years, some baseball clubs were associated with football teams such as Everton, West Ham & Aston Villa, and in 1938, Great Britain beat the USA in what is regarded as the first Baseball World Cup competition.”

The sport has had a steady presence in Britain, dating back to the 19th Century and only began to lose popularity following the Second World War. There has been renewed and steady growth over the past decade or so. Hopes to boost the sport during the 2012 London Olympics were crushed when both baseball and softball were dropped from the Olympics the day after London won the bid.

Matt Smith is a writer at Baseball GB, a website that writes about both Major League and British baseball, and a fan of the Oakland A’s in California. He says he began watching the MLB on television in 1998.

Smith says, “It’s a shame that some Brits have a dismissive attitude of baseball being ‘America’s glorified rounders’ because I’m sure if more came to it with an open mind they’d quickly appreciate the athletic skill, drama and excitement of the sport.”

Fromer suggests two significant reasons for the rejuvenated interest. One being, “the greater availability of MLB games on British television” and the other is “the coming into being of BaseballSoftballUK, a dedicated development agency for the two sports”.

Many other American sports like basketball and American football have been successful in the international push in Europe. One method that has been used to great success is to supplement the TV product with meaningful real-life games on British soil. Practical limitations seem to play a part in making this strategy less viable for baseball since many stadiums simply do not offer appropriate physical dimensions.

Fromer points out that, “Playing a baseball game on a major cricket ground, like Lords, the Oval, Edgbaston, is a problem because the MLB season and the British cricket season coincide, unlike in Australia where two MLB games have just been played at the Sydney Cricket Ground.”

It does seem that there are some roadblocks for the growth of baseball as spectator sport in the UK. Baseball though has some significant advantages. Primarily, how fun and simple it is to play.

The NBL (Britain’s highest standard of Baseball) is preparing to begin their next season this April. London has several amateur teams. The London Meteorites (or Mets for short) are based in Finsbury Park. Demand to play is such that the club field five adult teams in skill tiered format. Not to mention four more teams at youth level.

They are not alone either with seven teams competing for the top tier NBL championship in 2014. The next tier below (known as AAA) comprises three divisions of six teams from as far north as Hull and Harrogate to the south. With even more teams at lower levels of competition, it is clear that there is a healthy demand for baseball at an amateur level in the UK.

With such a history of interest, the dedication of its growing UK fan-base and the ever increasing uptake of the game at the amateur level, it seems that baseball might be on the rise over the coming years.

UK Baseball may still be at first base, but the depth of the grassroots following inspires hope that it may one day reach home plate.