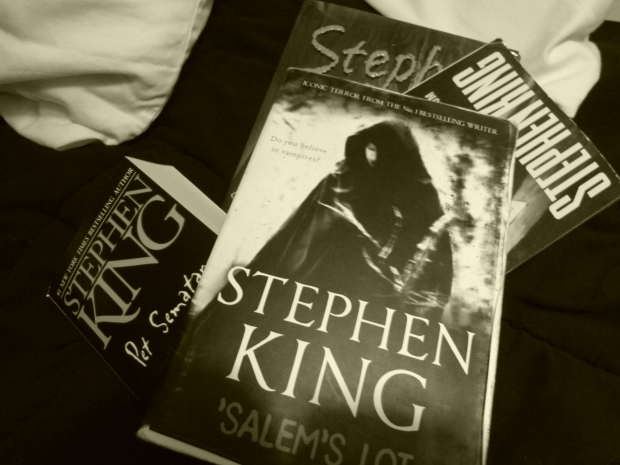 ‘Turn off the television – in fact, why don’t you turn off all the lights except for the one over your favourite chair? – and we’ll talk about vampires here in the dim. I think I can make you believe in them.’

Ah, the romantic, dreary, hot summer days – ones filled with heat that sticks and gives you the sense that you couldn’t move much faster than those garden snails you keep finding on the kitchen floor. They are days that hold so much potential to create worlds filled with magic. On muggy days like these spent in the country side of Wisconsin, nothing is better than reading a book that fills you with fear.

I’ve been reading ‘Salem’s Lot, but never have I read it the way that King proposed I should do: alone, at night, as dark as you can possibly make it. Since Spring and Summer came all at once, the bullfrogs haven’t stopped croaking all night. As the world of King’s vampires fill me with fear, I find myself a grown woman praying that the frogs don’t stop croaking – believe that if they finally are quiet I’m in as much danger as the heroes of my novel.

‘Salem’s Lot is not one of King’s most psychologically trying novels, but instead fills you with heartbreak and dread. What would you do if the small town you grew up in became a feast for vampires? You can think that through next time you’re alone at night.

But what does King’s Maine and my Wisconsin have in common? It’s that space. There is plenty of room to be filled with dark stories, whether they are fiction or not.I was having a late-night conversation with my best friend while we were driving through the dark woods trying to spot deer. We talked about the 12-year-old girls from Waukesha and how on earth Slender Man could be so manipulative for an imaginary creature. She told me about the bodies in Geneva. Wisconsin was even home to two of the nation’s most notorious serial killers. Strange that these places of our childhood can take such an ugly form (even if we are the most polite people you will ever meet).

The summer seems to be the best time to really let our imagination get the best of us. Fingers crossed the reality stays far away.

*I wrote this while in Wisconsin. I have been back in London for three days now. Can time slip by any faster?