Being unemployed for any amount of time has never been good for my health.

Since I was 15, there have been few periods in my life not spent either working, going to school (or usually both). People have told me to enjoy this time I have before I enter the “real world” of adulthood. There is nothing enjoyable about waiting around for two months waiting to get back to work. Maybe I could get a hobby, but there is no motivation when you could just sit around and watch a marathon of Hoarders: Buried Alive.

This is my reasoning for playing the Gremlins Gizmo game for the Wii. Probably because I really have no other excuses. 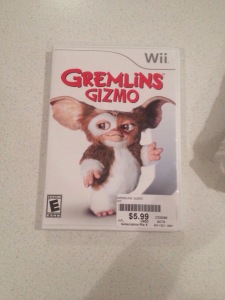 My poor father took me out of the house for the first time in a few days. As there is a used gaming store going out of business, we decided to take a look at the picked-over selection.

As a side note, the Gremlins have somehow taken over my life. Even reading that sentence over has made me realise my situation is perhaps a little more pathetic than I’ve been able to admit to myself. The movie terrified me as a child. Stripe and co constantly raided my nightmares and I absolutely refused to join in at the height of the Furby craze.

And yet… and yet mogwai have now become ‘my thing’. I even went as a sort-of female version of Billy Peltzer for Halloween. Even as we approached the store, a vision of Gizmo flashed into my mind. Maybe that’s why I wasn’t surprised to see him staring back at me from the shelves of the sad store.

Unfortunately I’m the type of sucker who can’t resist the sweet face of a fictional monster, so I bought (25% off, baby) the game completely unaware of what I had done.

Gremlins Gizmo is kind of a shit game. There really isn’t two ways to put it. Like most Gremlins merchandise, the game is aimed towards young children. Always a bit bizarre considering the movie’s dark tone and the sequel’s occasional mature-content (sexy gremlin, anyone?).

I could tell instantly when turning on the game I had entered some sort of bizarre mishmash of a child’s innocence learning to be spooked for the first time and a game made purely for Gremlins die-hards. There are plenty of references in the game that only people who know their Gremlins films would get (the dancing game, being able to play as one of the scrapped mogwais from New Batch).

Before I knew it I was three hours in and had poor Gizmo dressed as an alien. I couldn’t resist. Even in a video game I couldn’t stop myself from needing to reference the book’s back story for the mogwai from an alien world. He bobs around playing with toys, racing a little doll car and spends time learning about constellations. It’s a strange universe, but it’s the one I’ve entered.

The mental decline of a young-woman and her mogwai.

I’m not even entirely sure if I’m supposed to say if this is a good game or not. If there’s any dignity involved, I would say this game is a completely stupid waste of time.

But there I am, still thinking about trying to play it again later. Even if it’s just to see what other costumes there is to unlock.