After nearly five months of visa stress I can proudly say: It’s (almost) over.

But while I have reached the top of one mountain, I realised I had reach another one – the height of my weight gain. It’s incredible how stress can really affect you not only mentally but physically. Now that I’m free of the chains of legal burdens I have entered the gardens of working out at home.

In true American of London fashion, I do not run on a treadmill or lift weights. No – I have reached out to the god of weight loss and kitsch himself: Richard Simmons. Okay, maybe not via email, phone call, text or letter, but I’d like to think he’s spoken to me via motivational speech.

It can be a sad world spending every day alone. 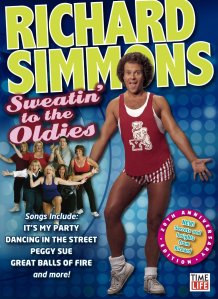 If you have someone managed NOT to hear about Simmons in past thirty years (and I applaud you for still knowing how to turn on your computer), he is a fitness personality most famous for his Sweatin’ to the Oldies videos. The man is pure energy akin to a club goer on coke. But he’s managed to give me something to do these past few days that doesn’t include eating my weight in peanut butter.

The man is one part of the formula. What makes many of the videos work so well is the music. A ‘live’ band (or even in one case a whole live choir singing ‘Shout’) accompanies a group of men and women of all varying shapes and sizes.

It’s pretty nice, though. Being someone who is not really overweight but definitely not in shape is a pretty weird place to be. Not thin enough to run with the pack in a creepy gym nor heavy enough to take drastic measures elsewhere.

What Simmons has given the world is a strange plane of existence where it is both fun to work out AND enjoy music that isn’t painful to bear. It does vary from the Supremes to the Spencer Davis Group and even turns a bit disco sometime. If you’re anything like me, having tolerable music playing while exercising is half the battle.

Simmons’ never-ending joy and love is probably not the right style for most people (he’s can be a bit too much excitement for one day) try another fool-proof work out plan: the 80’s movie getting ready montage: