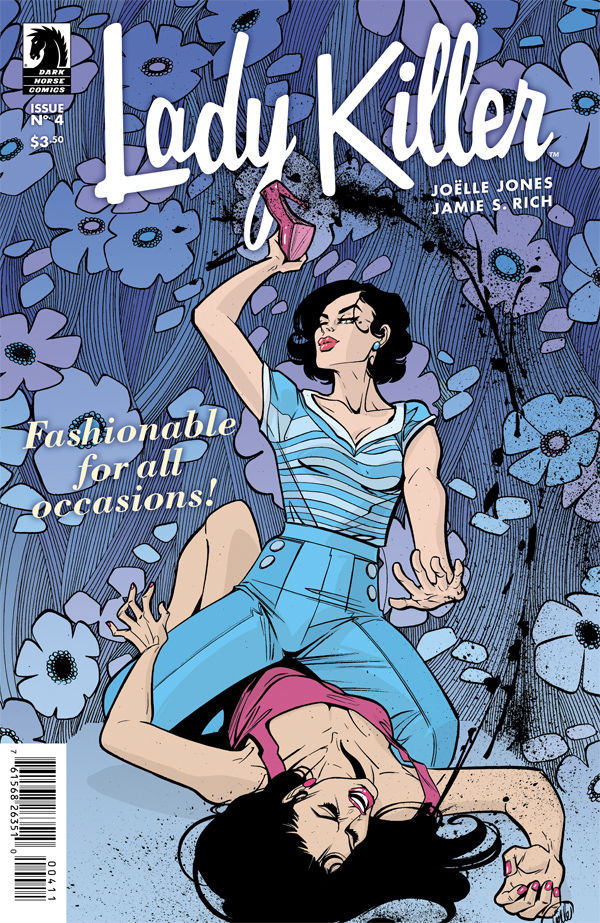 Last time readers saw Josie, she was in a bit of a bind. Not hitting her last target finally put her in big trouble with the big boss – and the price is not just a slap on the wrist. More a ‘bullet in your head’ type. Josie and Peck are not particularly on friendly terms anymore. With a hit on her, Josie is on the run from her former coworker, and the resulting car chases are gripping.

This issue also introduces an important new character, Ruby. She’s as much of a sultry badass as Josie is. Without giving too much away, their new partnership promises to be a really great one. What is done really well in this issue, is the really interesting juxtaposition between the blatant mid-century misogyny and the pure strength of character of these two women. That’s what helps really push this comic to a different place. Jones and Rich give their message, but it never feels preachy – it only enhances the colour and story of each character.

The tone is certainly different than the previous three installments. It’s darker, more of a revenge plot, but it definitely hasn’t forgotten about the thrills. There was a bit less dialogue (and thus less quips, unfortunately) than usual, but this was definitely the most fun issue to look at. Jones’ artwork, as always, was a massive pleasure to enjoy. The action moves quickly and it’s difficult to turn the pages fast enough.

Next month’s issue #5 is the last, and it has definitely gone by way too fast. The story line was probably a bit too much to have in just five quick issues. Hopefully this won’t be the last anyone sees of Josie because this story has been a whole lot of fun. The concluding issue can’t come soon enough.