Ah Beat Happening. That endlessly droning, childish band that I love so dearly. Never has there been a band with the ability to make great music sound so… lazy? I’ve always found describing this band difficult, and I’ve never really read anyone who has been able to do so either. Everything either comes off as misleading or just as an insult meant as a compliment.

“Crashing Through” is a single that pretty much sums up that paradox. It’s minimalist and monotone, yet punchy and actually produces the sound of punching…through.

Unsurprisingly, “Crashing Through” clocks in at under two minutes – my typical attention span for a non-pop song, and a pretty typical length for Beat Happening. The single certainly isn’t a song to dance to, sing a long with or play for your grandmother (unless you have one of those hip grandmothers who enjoy indie lo-fi bands). Though it doesn’t have all the dressings of a typical single, there is still a hook and it still remains a great tune to listen to.

Side A is pretty much a test of endurance. Just how much can you take? “This Many Boyfriends Club” consists of feedback and Calvin Johnson at the top of his game (meaning long held notes that are not always on key). Side B is a bit more musical and traditional, I guess. Dare I say “Look Around” is something worth a bit of hip-swinging, and “That Girl” even throws in a tambourine. The contrast is actually really nice for a shorter EP like this.

Beat Happening have become one of the few bands that make me a bit insane when it comes to buying. I refuse to buy anything of theirs online. Normally I’m fine with this, but it just feels like a dirty deed not finding it myself. If you’re an American fan (or know how to read blog titles), you’ll probably see that this is a UK-only release. Finding Beat Happening records anywhere is pretty damn hard. It’s both a blessing and a curse that they weren’t that successful.

Curse: finding Beat Happening records is nearly impossible in shops. At least it was in the Midwest towns and cities I lived in for the last four years I lived in the States.

Blessing: In theory, this means that there is a possibility that Beat Happening records could always show up in the most unexpected of places.

And that’s how I found my first-ever Beat Happening record. This one.

When I studied abroad I lived in the very posh area of West London. Those few months of “studying” I went crazy trying to buy all the unusual releases I couldn’t find in the States normally (which ended up being a critically damaging past time to my bank account).

There’s an area called Notting Hill (yes like the movie) that my roommates and I regularly visited on Saturdays to indulge in the weekend market on Portobello Road. This area of London is much different than it was even three years ago. Many small, quirky shops are now chain shops and Starbucks. But just those few years ago there was a record shop that was small, dark and held my wildest dreams.

Just a short walk from Rough Trade West was Intoxica Records, now located in a much more central locale in Kentish Town. It was there that I found this baby. The bright yellow and childish drawings were completely recogniseable. I bought it immediately. When I was at the til purchasing my goods, I had a bit of a fan girl moment (one of the few I allow myself) and told the worker that I was so happy to find this album because it was “difficult to find at home.” The man was top-notch and seemed to enjoy my eagerness. He shuffled away for a moment and produced a 7″ single of theirs to add to the pile, “Red Head Walking”.

This baby is great. Beat Happening is a band that sounds exactly like they should on a turntable. It might only be an EP, but it’s still an experience to listen to. 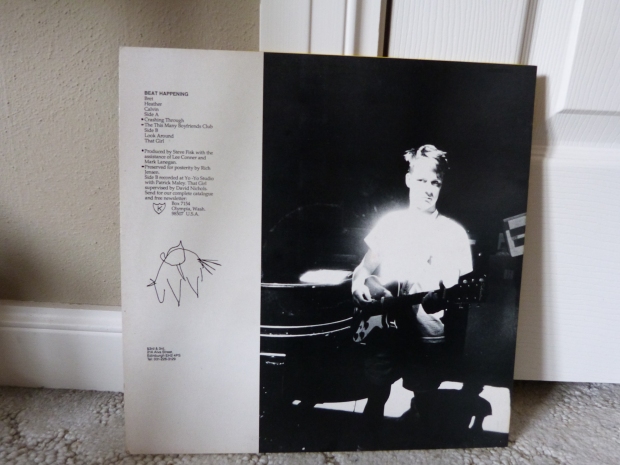