Ever wish that bigfoot was real? That mankind could discover a creature that has haunted legends for hundreds of years? No? Well, too bad. This week’s movie is a 1979 number, The Capture of Bigfoot.

This was originally a Film Corp release, but was re-relased by Entertainment Troma. I think that says plenty. This is the group that released cult classics like  The Class of Nuke ‘Em High, Surf Nazis Must Die and The Toxic Avenger. If they felt like The Capture of Bigfoot fit right at home, then things certainly can’t go too well. But if you weren’t hooked on that, it is directed by Bill Rebane of The Giant Spider Invasion. Everything comes full circle, see?

The movie begins with two trappers and their dogs out in the boonies with an unseen creature they’d caught. It doesn’t take too long before they hear something in the woods that proceeds to attack them. What exactly attacks them? Why a giant fluffy white arm! Terror! Shock! Horror! One of the trappers manages to survive the strange attack, and is rescued by his trusty dog sled team who have run him back into town.

The plot is pretty confusing because everyone essentially looks the same to me (they all wear lots of plaid) and there is a lot of business going on here cast-wise:

Owen insists he goes to the hospital to speak to the trapper, who apparently had been working for him. Before slipping into some sort of a coma, the trapper tells Owen that he was attacked by a “critter” which is a pretty big understatement. But Olsen sends out his two trackers to look for whatever is out there, thinking that there is big money to be made.

Thankfully there are two men on snowmobiles that seem to have some common sense in the transportation department. They have been sent out to look for whatever it was that attacked the trappers. It must be noted here that the music is pretty great. Kind of like the Shaft theme but for snowmobiling. That’s the 70s for you, eh? Anyway, as the two men continue their search, they find a set of bare “human” feet, only the tracks are too small to be what they are looking for. Which can only mean one thing…

TWO bigfoot monsters are roaming the forests in Wisconsin.

The creature isn’t very shy and the movie doesn’t seem to be bothered with any form of build up. In other words, the bigfoot is always flashing around in the woods attacking people. The creature sort of looks like the gremlin from the iconic episode of The Twilight Zone, “Nightmare at 20,000 Feet.” Though, there’s a significant amount of class that the gremlin has that Bigfoot just can’t seem to replicate.

After that one heck of a plot twist, Olsen is NOT happy with the news as he quickly throws one of his trackers out his window. Not advisable in a Wisconsin winter. But he puts his plans in order when he decides to set a trap with “live bate!” Word spreads via little brother, Jimmy, that the baby had ‘foot been killed by one of the trackers. Apparently there have been sightings of bigfoot before, but very rarely attacks and —

Uh. Disco scene! Yes this is completely necessary to the plot because now we know that not only do Wisconsinites like to ski, they love to dance to some funky tunes.

As quickly as that started, it’s over. And Forest Ranger Dave has decided to meet with one of the local natives, who have a story about a creature called the Arak. According to legend, this bigfoot creature led the elderly on into their next lives. Or protect them. Or something. Either way, he meets with the last member of the Arak tribe to see if he could be of any help.

After knocking Dave and…someone out cold (ha ha) and tying them to a tree, Olsen is free to set his trap and he quickly captures the “elusive” monster that he has been searching for for over 25 years. It doesn’t seem that Dave and his buddy have long sitting in the snow to freeze to death.

But the game is not over for Dave, as the two are freed by the Arak tribe who gives Dave a pretty little necklace which will help allow him to communicate with the Arak when he is wearing it (I think).

The climax of the movie is SO full of drama, SO full of action and suspense that I could hardly ruin it for you… Jokes aside, there are lots of things blowing up. So that’s pretty fun. And a happy ending for (nearly) everyone. That includes Mama Foot, which is pretty great because I’m assuming the deeper meaning of this movie was the preservation of wildlife and their special habitat. Or something.

Lloyd Kaufman, co-founder of Troma, regards The Capture of Bigfoot to be one of the worst five movies released by Troma. I have to admit, I didn’t think this was that bad as far as bad movies go. The plot is thin, yes, and it’s difficult to follow (or make sense of) but it’s still no Black Cadillac. It’s enjoyable for a good chuckle at the strange editing and the hilarious bigfoot costume. Like that bizarre theme song or whatever goes: “You’ll only find freedom the day when you die.” Er… yeah! 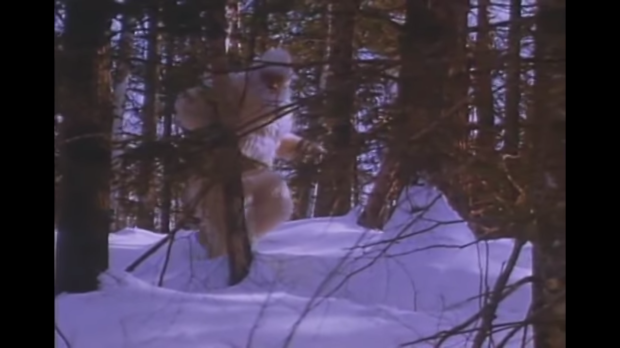