A special shout-out to Bill Rebane for making and/or setting so many movies in Wisconsin. Without him, this project would have lasted three weeks. His movie The Game, or The Cold as it is sometimes titled, follows a fairly House on Haunted Hill type story line. Three millionaires bring nine people to a mansion where they will have to face their fears – all for the reward of mega cash. All familiar territory, but in the realm of 1984 low-budget fare.

A new game – a sort of fun and game for the rich who have become bored with their lives. Doesn’t seem too far outside the realm of possibility. The old friends discuss ‘the games’ of the past – of which last year got out of control and nearly resulted in a ‘loss’ – “could have been very embarrassing” remarks one of the men with one of the most manly-man-old-man voices ever. Though that hardly seems too important because we are quickly moved on to an 80’s disco. This now seems to be a motif in Rebane’s 80’s movies and I’m really growing fond of it (but nothing will ever top what happened in Capture of Bigfoot – “Sensuous Tiger” is ALWAYS stuck in my head these days). But thankfully The Cold holds its own and gives us funky moves from people of all ages.

Why does this scene happen? No body knows. I can’t seem to find a clip of this, but just take my word for it that this it’s painful.

And ‘the players’ consists of:

After the introductory dance party, the players are introduced to “the game of fear”. The winner receives a prize of a million dollars. The only requirement to win is to be the last person to leave the grounds. How will they get rid of the players? By fear, of course! The players are instantly introduced to the first bit of gruesomeness when they discover a tarantula in the soup. One of the men instantly smashes the beast with his foot, which I can only assume is a reference to how Rebane felt about The Giant Spider Invasion.

The three hosts leave with these parting words: “Good night and pleasant… screams.” Just when you thought you couldn’t cringe any harder, they cackle manically as they leave the table.

The games aren’t supposed to start until noon the next day, but of course things get freaky before then (thankfully). But when the REAL games begin the real terror begins like no plumbing and cold winds! Though I think the most terrifying part is the dialogue:

The mansion parts of the movie were filmed in the Northernaire Resort in Three Lakes. The movie doesn’t change the name of the location, which I find weird, but I also strangely accept and love. The place is massive. It gives the movie a feel of isolation really well. But of course the players aren’t alone. Plenty of strangers pop up occasionally: taking out players, skipping to Scott Joplin, walking in the background unnoticed. Then there is this guy lurking about: 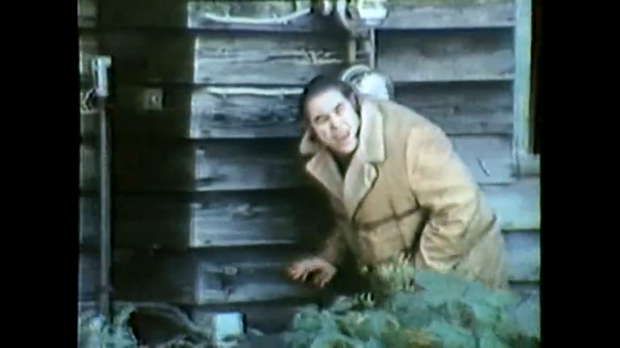 One of the band members/boyfriends goes missing. As night falls, the players are shown his body, apparently hung from the ceiling, on the television. The show seems to be a nightly occurrence (and host even plugs Giant Spider Invasion, so my earlier haunch is brilliance). Soon player after player becomes trapped in one way or another, most of them by looking for their missing band member. And preppy boy is proving to be more suspicious as each scene moves by.

The three hosts play Russian Roulette with Miss Southern Belle. They walk away cackling at all the fun they had when they hear a gun go off. The mystery begins of whether they’re truly the ones in charge or if there is perhaps another player on the field playing them. Thankfully it doesn’t bother them. Don’t let the man get you down, man! But the players seem be learning a few tricks, including the fact that an old patient at a mental home was a janitor at the resort.

Though “Felix”, the janitor man, is not all that he seems (as apparently nothing is in this movie). A twist is revealed. Then a twist on the twist is revealed. Then I’m really, really not sure what happens. THEN ANOTHER TWIST. It’s a really confusing ending. Even the narrator (who is only present at the beginning and the end) doesn’t seem to understand what is going on because he asks the audience the same questions they’re asking themselves.

I’ve found that most people enjoy The Game less than several of Rebane’s other films, but for me this is probably the second-best after The Giant Spider Invasion. It’s one of the few that still keeps some momentum beyond the hour mark. Well, for the most part anyway. The ending is one of the more unusual I’ve watched so far. Not necessarily good but it made me scratch my head at least. But at least this one gave me a couple chuckles, which is worth something.