My thoughts for Vinyl Friday for the month of October was to choose some more “Halloween”-type albums. Turns out, I don’t really own any, but this one is orange and it certainly scares the crap out of me. So kids, here is the original cast recording of the Off-Broadway production of You’re a Good Man, Charlie Brown.

If you’ve been reading my blog for any amount of time now, you’ll know that I am a massive Vince Guaraldi fan. None of his Charlie Brown music is featured in this 1967 musical. The music was actually composed by Clark Gesner, who has written some rather nice songs for the production. But I hate musicals, and this isn’t an exception to the rule. I know it’s a popular production, but adults acting like small children really unsettles me instead of entertaining me. It’s a shame because I actually really like the music. I just can’t ever un-see that back cover. The music doesn’t hold a candle to anything Guaraldi did, but I suppose that’s just comparing apples and oranges.

But I think the most horrifying part of this album is the sound quality. Incidentally, the first release of this album was recorded during a live performance. The cast hated the quality so badly, they went into a studio to record it. Somehow it still ended up not being great. As I mentioned before, the songs are nice but they don’t make a great soundtrack of just stand-alone songs. There isn’t any dialogue included, so it jumps from song to song and includes all the really long, strange instrumentals.

FYI – it does NOT sound great in stereo. Thanks for that bullshit, cover.

So why do I have this album in my collection? Well, it’s one of the few things I ever inherited. My grandmother’s cousin died when I was in high school. I never met the man, but we had many similar interests. We both enjoyed the same types of classical music, enjoyed writing and of course, liked Charlie Brown and the Peanuts gang. He’s the man I inherited my 1990 Ford Probe from (RIP Big Red). So even though I would rather listen to the sound of nails on a chalkboard, I do feel a real sense of fondness for this particular album. I hope one day it grows on me and I’ll find more of an interest in it, but for now it just remains one part of my collection that I want to hide from. 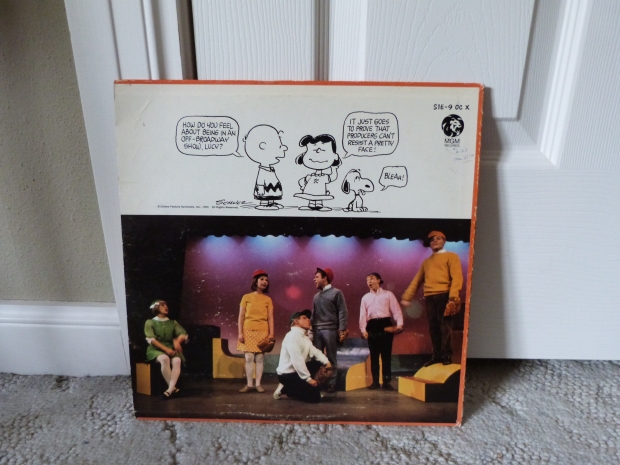