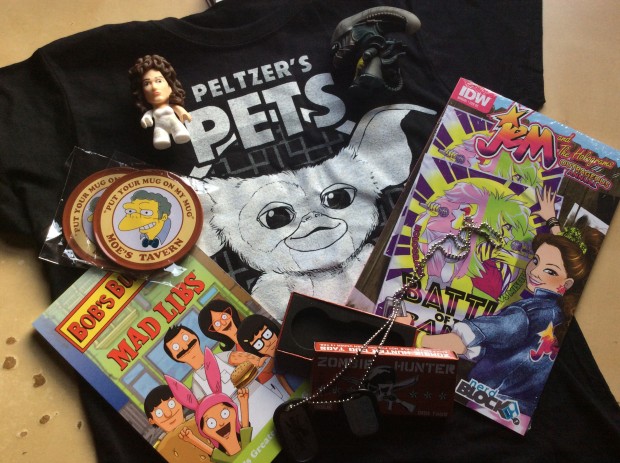 I splashed a tiny bit more cash this month to try out the classic Nerd Block, who also runs Horror Block (which is being sent out later this month). As I receive the newsletter every week, the teasers for this month’s Nerd Block caught my eye immediately for containing two items from some of my most favourite brands. After opening this block, I was more than satisfied.

I have to admit I don’t know the first thing about Bob’s Burgers other than watching an episode or two back in my university days. It seems fine enough, but who the hell doesn’t love a good Mad Lib?

Do people still wear fake dog tags as fashion accessories? For a few of my teenage years I wore my father’s dog tags, but I had to stop after several people thought I was actually in the army and started thanking 14-year-old me for my service (who ever said Americans were smart?). Anyway, this is hands-down the worst item in the block and that’s including more of those god-awful Titan Vinyl figures.

I cannot and will not talk about this t-shirt rationally. LOOK AT THIS FUCKING T-SHIRT!

This shirt and the Jem annual are the two reasons I tried out Geek Block this month. And I really, really was not disappointed by this t-shirt. I’m normally a pretty normal adult by bland white-people standards: skirts or dresses every single day. But the one time I usually go out on a limb is with shirts with mogwai on them. Especially if said mogwai is everyone’s favourite hero, Gizmo. I’m going to MCM Comic Con London again this weekend, and this shirt is bound to make an appearance.

As an added bonus (just when I didn’t think this shirt could get any better) – the information card tells me that IT GLOWS IN THE DARK. Not only glows in the dark, but the sweet image of Gizmo disappears and a gremlin appears instead with “feed after midnight!” as the caption to egg you on to make bad choices. God. I fucking love Gremlins.

4. Jem and the Holograms Outrageous Annual #1 with exclusive cover

I’ve already read this Jem annual twice already since I picked it up when it came out a couple weeks ago. As we all know, I’ve really been loving the shit out of this IDW series. The annual is a selection of short stories all illustrated by various artists. The Holograms attempt to watch a movie after a long day, but all fall asleep to have some rather interesting dreams.

There are about five different covers for this first annual, and there are some really nice variants (as always because IDW always publish about 8 covers for each issue and I need them all). This Geek Block exclusive cover is by artist Amy Mebberson. Mebberson also drew a variant cover for the first Jem issue and did the art for the “Wired” part of the annual.

These are really great. While I was never a massive Simpsons fan, it’s pretty difficult to deny how fun these coasters are. And for once these are really nice quality. They even have proper cork on the back and a plastic (?) topping, which means they’ll last infinitely longer than the usual cardboard fare.

Fucking great. Is this how you repay me for months of support, Nerd Block? MORE of these disgusting things? Who on earth likes these? Seriously. Who are you so I can hunt you down and make sure you never buy one of these horrifying things again. Last month’s rant on my Horror Block unboxing is enough. I’ve said all I can about these monstrosities and I shall never give them anymore of my time. Even if it is Ripley. Sorry.

Next month the people at Nerd Block are launching the new Sci-Fi Block, which promises plenty of science fiction-related goodness from brands like X-Files, Firefly and Star Trek. The first block (which is shipped in November) promises a Star Wars: The Force Awakens Funko Pop and a celebrity autograph.