London’s biggest Comic Con is back at the ExCeL Centre this weekend. There was a lot going on today including a massively popular Doctor Who panel this evening. Sunday promises to bring more exclusive news and announcements.

The epic poem Beowful will be brought to life in a thirteen-part mini-series for ITV. The show, described as a “Western” will join a television environment saturated with fantasy shows like Game of Thrones, but this one is promising to bring something different to audiences.

One thing is the multi-cultured cast for an equally multi-cultured audience. Like ITV’s Jekyll and Hyde, which premiers this Sunday, the new adaption brings something different to the familiar tale.

The story takes place when Beowulf returns from his journey referred to in the epic poem. Awaiting him at home is a whole new cast of monsters waiting for him. The fantasy aspect will one take this legend to a more relevant place for audiences.

Writer James Dormer promised a fun show, but with a “sexiness” included. The show is meant to be family-friendly, another aspect to the show that might not be so common in the current fantasy realm on television.

Stars Kieran Bew, Ed Speelers and Laura Donnelly joined the stage to share stories of sword fighting and horse riding. Also included in the presentation was an exclusive clip for the upcoming show. The trailer included vast landscapes of Northumberland.

Beowulf: Return to the Shieldlands will be on ITV next year.

2. Edward James Olmos pleases the heck out of Battlestar fans

My husband is a massive Battlestar Galactica and Blade Runner fan. He was green with envy when I told him who was standing before me. Olmos was fantastic man to watch. He is clearly an intelligent man that really can hold the attention of a crowd. Not only was he articulate, but he also answered all of the questions with great thoughtfulness. While there are lots of special guests that come in and out of these events, Olmos was one worth listening to. Also he was clearly grateful for all the enthusiasm and love from the fans.

If there was one big pull to this weekend’s convention, it is definitely Mark Gatiss and and Steven Moffat. The two are British royalty, you know, well they would be if Britain didn’t already have a royal family.

They, along with Sue Vertue and actress Amanda Abbington, brought some big news to this weekend’s convention and it was all about the Victorian Sherlock special. The special finally received its name: The Abominable Bride, and the one-off episode also had a date reveal. The show will be on BBC One and BBC America on January 1st. British viewers will also be able to see the show in Picture House Cinemas with tickets on sale starting Novmber 1st.

Benedict Cumberbatch and Martin Freeman will reprise their roles, but Victorian England will bring about some interesting challenges for several of the female characters like Abbington’s Mary.

The rest of the panel remained tight-lipped about any further details. 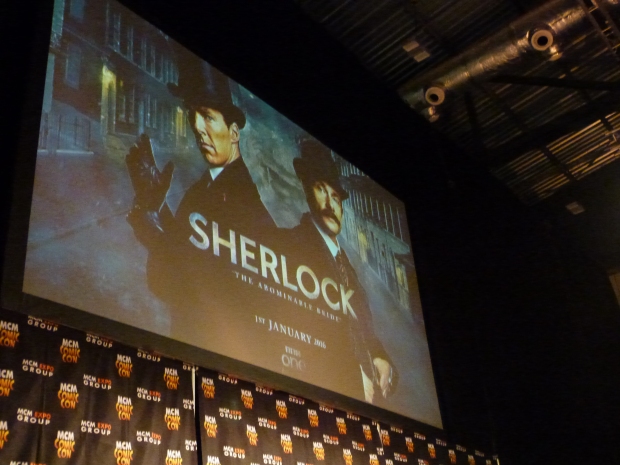