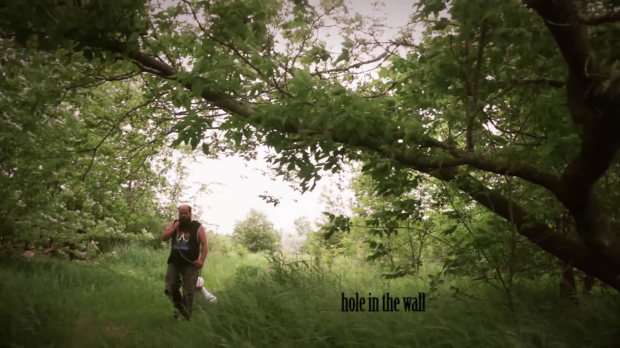 I think it’s pretty safe to say that I didn’t think where would be a week 29. There’s a week 30 after that too. Every once in a while I get to a point where I think “Well, that’s just about it” and I discover that there is always something else lurking around the corner. Although I do have to say that this horror anthology might have escaped my notice if it wasn’t thanks to John Pata, who directed the fantastic Dead Weight.

Hole in the Wall is an anthology containing several different short films.

The first bit opens along with the opening credits as a man drags a sheet-wrapped body through a field. A boy, Eli, is watching the man through, well, a hole in the wall. Since Eli’s clearly a pretty indiscreet farm boy, he’s pulling into the upstairs room by the man to watch what happens with the body. This segment is interspersed with the others as a sort of linking feature.

In, what I guess in the next short film, a hitchhiker is picked up, knocked out and put in a cage. The hitchiker wakes up in a run-down apartment to see his surroundings with his dog in the cage above him (which at this point I can only care about the dog because I just know it’s going to die). Uh then I guess the kidnapper starts pissing blood? This is clearly the start of the film’s grim and gory reputation. He’s clearly not a friendly sort of fellow and continues keep the two in their separate cages despite the fact that he probably needs to go to hospital to get it dick looked at.

I’m really going to try not to give too much away, but I will say there is some pretty gross stuff going on in that little apartment. There were plenty of “OH GOD” and “FUCKING HELLS” going on as I got throughout this segment. The kidnapper is a man who clearly needs to sort his shit out.

The third segment clearly was more interested in a comical tone. It opens in 1944 where a pre-grave-digger Ed Gein is sitting with his Mama, learning about the dangers of the world. In present day, a man is meeting with three women. He has a chair that apparnetly Ed Gein sat in himself. The three witches (?) raise Ed Gein from the dead, but he’s back – as a killer dentist. Watch Gein take people’s teeth out! Watch Gein pick up girls at a bar! It’s fucking weird, but hey! It’s not the worst Ed Gein film I’ve seen.

Segment #4 is uh… well, more different yet. I’m not really sure how to describe it other than Blood Harvest with Tiny Tim’s character on acid. Um, if I’m trying to take anything about it, men in drag/clown make-up are not always trusty-worthy sex partners. So. Moving on to part 5? Actually, the two are quite similar. As the next bit is about as trippy as it’s predecessor. Mostly because the actress drops acid.

Really, I’m writing this as I’m watching this and I still can’t say what the fuck is going on. Though, wonder if my problem is trying to look for meaning when perhaps there isn’t supposed to be anything other than “this is a total trip and it’s gruesome.” But I know that can’t possibly be true. And I kind of hate not understanding what’s going on.

After, the backstory is filled in with the main story. The memory begins with a man, who is covered in blood, dragging his handy axe. He’s shot and killed where the woman possessing his mind takes over the man who murdered him. “It and I… are one.”

But I’m still not really sure if any of this means anything at all. It’s been a really demented ride, but some of the segments are so far-out I feel like I need to be watching them in a classroom. I can’t say which segments are better than the other because it’s clear that some were more conventional that others while some tried some really interesting and different techniques in their story telling. This is not trying to be diplomatic, but each piece really delivered something drastically different than the last. Certainly some are utterly unforgettable, but I think there was quite a strong sense of feeling throughout the movie that I can watch these and feel “Well, this is Wisconsin horror.”

In the politest terms possible, Hole in the Wall is fucking disgusting, but it offers some brutal imagery that could only be offered by an indie production. It will make you uncomfortable and squeamish. Half-way through watching this movie, I had to run down to our local pub. It’s safe to say that this movie affected me because even though I live in one of the largest cities in the world, I felt that eerie loneliness and vulnerability that these Wisconsin-based movies made me feel, which I think speaks volumes of its content.

If you’re reading this on the published date, you might be thinking, “Bitch, it’s a Tuesday.” And it is. But this is a pretty busy week for me as Wednesday and Friday I will be at the Prince Charles Cinema to see Zach Galligan present Gremlins and Grelmins 2: New Batch. All exciting things on top of Thanksgiving on Thursday (which I still have to celebrate every year, even in dreary England).

And yes. If you’re wondering if that stop to the pub made me a little drunk while writing this? The answer would be yes.