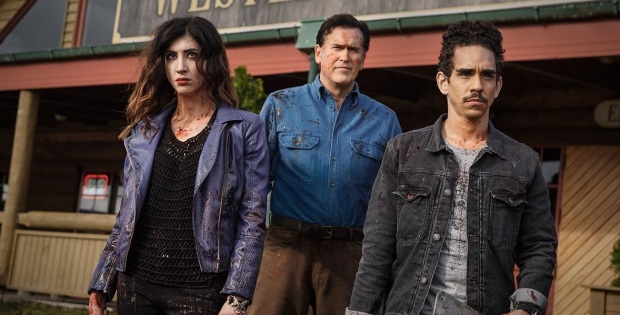 “The Killer of Killers” brings Ash vs Evil Dead straight back to some gruesome, brutal and fucking FUN roots. This was by far one of the strongest episodes of the season thus far. It brought along the plot and gave Ash fans some of the stuff that brought them here to begin with.

Amanda and Ruby arrive in the aftermath of last episode’s exorcism. El Brujo’s body has been burned, along with his spells. This, of course, only add fuel to the fire for Amanda and Ruby’s suspicions of Ash being King of the Deadites. Though, while the two scope out the Brujo’s house, they neglect to notice that his mostly-burned body has come back in Deadite form to, well, literally blow up Ruby in a rather-explosive (sorry) intro to the episode.

Amanda quickly hops into Ruby’s Dodge Challenger to take on Ash and the gang herself. Though Ash’s hand has run away from her, she still tracks the gang down at a restaurant called the Western Moose.

Over pancakes, Ash tells Pablo and Kelly that he knows he needs to head back to where it all began: the cabin. But he decides that he doesn’t want to bring his two side-kicks with him, which we all know is a bunch of crap. They make their protests, saying that they’re well-aware of the dangers. And Pablo gives his typical charming response, “If I was a Deadite, I would be honoured to have you chop my head off.”

But while they finish their meal, they’re interrupted by an acquaintance named Lem. He’s a part of some militia who’ve stock piled several “toys.” Considering the road ahead for Ash, this instantly perks his interest and expresses his interest in taking a peek at what Lem has to offer.

The entire time they are all being watched by Amanda, who has phoned her former boss at the state police to tell him that she finally has a location on Ash. While she gets reprimanded for working when she’s not allowed to be on duty, he agrees to meet her at the Western Moose.

Also, poor Pablo. He attempts to talk to Kelly about her coming on to him when she was possessed, but he still keeps getting pushed aside. Thankfully Evil interrupts while the two are having their heart-to-heart. The necklace that Pablo got from his uncle seems to be a particular trinket that the Necronomicon doesn’t particularly like. He and Kelly has to pile weight on top of the trunk containing the book just to stop it from attacking.

Things, though, have only gotten worse for Ash as he can’t afford the pancakes he offered to buy. He dismisses the youngsters and tries to hit on Nancy the waitress, who obviously isn’t buying anything he’s selling. But he tells her to wait for him in the men’s toilets. While he’s there, it’s not Nancy that arrives but Amanda, who arrests the man. While trying to lead him out of the restaurant, it seems that Evil has a different plan for the day.

Amanda’s boss enters the restaurant to take over from Amanda, but Evil bursts through the window, immediately killing several people in the building in several imaginative (and totally gross) ways. And finally, finally there are Deadites back front and centre in this show. The scene with the gang fighting Deadites in Western Moose is by far one of the most cringe-worthy (in a good way) and utterly fun scenes that has been in the show for a while now. Kelly has a particularly great scene with some excellent one-liners (“Thin slices: just how I like it!”).

As Ash, Kelly and Pablo leave the Western Moose, it only feels right that Amanda joins them. She’s finally a convert to team Ash and I really hope that this means that her character will be a lot more interesting from now on. I really am glad that these plot-lines are coming together finally.

So is Ruby done for? (Doubt it). Will Pablo and Kelly ever continue their super-awkward conversations of love? What the hell is going on with Pablo’s new necklace? And what lies ahead in the future for our crew? God, who knows, but “The Killer of Killers” certainly got me excited to find out.