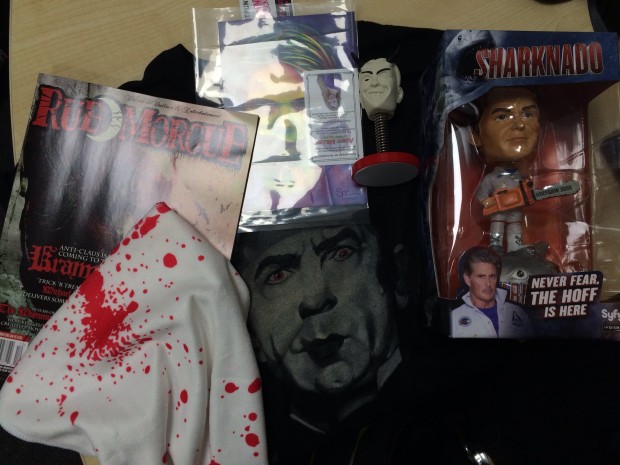 This is a post I’ve been putting off for a few days now because quite frankly, I find these so dull to write (which I then imagine means it’s pretty dull for you to read). So as I say every single time, this is the last box I will ever get. But I’m dead serious this time (I think) because I triple-checked that my subscription was totally done with. Things aren’t easy when you’re poor as fuck. Christmas time + moving into a new flat + broken television + father visiting in a week’s time = one extraordinarily poor lady.

As you can tell from the sexy picture above, this was taken in haste. Why? Because I am so uninterested in most of this box that I didn’t bother bringing it home. Also, I thought at some point I would have had time to take a nice photo of some of these items, but then I realised that winter is a perpetual month of endless hell and darkness. So thanks, florescent lights of the office, you allowed for one atrocious photo!

If you can’t tell, there is quite a smattering of items this month. From the really great to the really… meh. So… what’s in the box?

I love me some Bela Lugosi, so it was rather nice to get a shirt from Horror Block that I could actually get excited about. Plus ShirtPunch! are now also doing limited-time collectibles twice a week. Like the shirts, they will be constantly changing, though which items will be available and on what day and time available will be a mystery. That's certainly one way to keep people checking back.

The worst part about being a horror fan lately is being out of the Walking Dead loop. I have absolutely no interested in it. If you’re really into this show, every subscription box in the world must be fantastic. A young Addy Miller appeared on the show as a young zombie girl back in the premier. The print is pretty fantastic, and it comes with an authentication card.

This is hands-down the, uh, most “interesting” item I’ve ever gotten in a sub box. But yes. Here it is: a bobblehead of David Hasselhoff with chainsaw! While I do love me some B-movie goodness, I never watched Sharknado or any of its incarnations. Turns out no one in my office has either because NO ONE will take this thing off my hands. This is an exclusive item to Horror Block. How exclusive, I don’t know. But if I liked this movie, I would certainly find this hilarious (I think).

I am SO happy to see a proper issue of Rue Morgue back in Horror Block this month. While their books are quite interesting, I always want a copy of this magazine. This is such an expensive mag to buy in the UK, unfortunately, so I will have to savor it for sometime before being able to afford another issue. There’s a pretty great interview with Michael Dougherty for his new movie, Krampus. It’s a cool Q&A which mostly talks about Trick ‘r Treat, but really just says what we Halloween-obsessed always want to say: “Screw Christmas. When’s Halloween?”

As I’ve said a few hundred times now, I’ve moved into a new place. Getting cleaning supplies in this block actually made me excited. So that either means I am a.) lame b.) old or c.) both.

This exclusive from Springz ranks among some of the best stuff I’ve ever gotten from a subscription box. I’ve seen every episode of the classic Twilight Zone at least half a dozen times. In the episode “Nick of Time” William Shatner and Patricia Breslin come across a fortune-telling machine in a cafe. This little Mystic Seer appears on the top of the machine. This is meant for a car, but I’ve currently got this proudly displayed on our bookcase. Well done, Horror Block. All the classic horror stuffs, please!