I wanted to watch the episode with Tim Curry from 1981 instead, but the internet seems to lack access to these old episodes (what the hell, Hulu?!). I much prefer Tim Curry to Christopher Lee. I know, I know. Everyone always assumes that I’m really into Hammer Horror, but my not-so-dark secret is I find most of them “meh”.

But alas, I do like Christopher Lee in other, non-horror related things. Though watching Lee in Saturday Night Live wasn’t something I thought I would see. But SNL in ’78 had one hell of a classic line-up: straight off the bat in the cold open, Gilda Radner and Bill Murray are talking about John Belushi changing his name to Kevin Scott for a role in Grizzly Adams. Just seeing all those lovely faces on one screen makes my heart warm.

Though, I do think anything Christopher Lee does on SNL is going to be excellent. Mostly because he is sporting the most incredible mustache of all time: 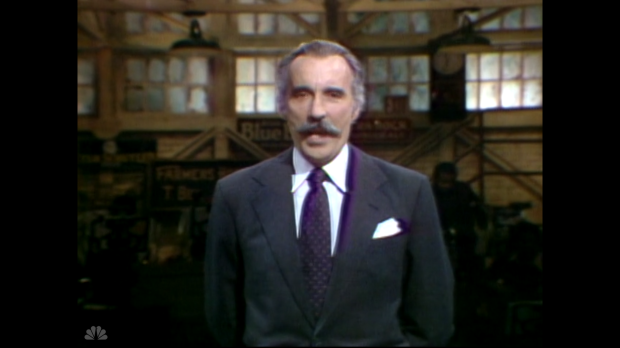 Lee’s opening monologue features three different trailers for upcoming films. The first “stars” Garrett Morris (yay!) in The Island of Lost Luggage. The second is The Thing That Wouldn’t Leave, which is Belushi, of course. And Vincent Price (Dan Aykroyd) is Dr Jekyll and Mr Rogers (which I would see).

In the first skit, Radner’s Baba Wawa appears in London, looking for lodgings at Lee’s home. Baba is looking to improve her speech in a My Fair Lady-inspired skit. Every time the music starts and dies out immediately, the crowd chuckles, but when Lee seems to have picked up Baba’s speech impediment, the sweetness of it all is pretty damn great.

This episode of Saturday Night Live was Meat Loaf’s first television appearance. It came about three years after 1975’s Rocky Horror Picture Show. In 1978, when this episode originally aired, it was a year after Bat Out of Hell was released. Here, he’s jokingly introduced by Lee as “Loaf”. Always great live, Meat Loaf appears with Karla DeVito performing “All Revved Up With No Place to Go”. It’s wonderful and theatrical – everything you should expect from a Meat Loaf performance.

Following Meat Loaf’s first performance, Jane Curtin does the Weekend Update with Aykroyd. As usual, I love this pair together. Curtin’s deadpan is so damn good, it always leaves me in awe.

For the second skit of the night, Lee plays Death visiting a young girl (Laraine Newman), whose dog Tippi just died. He’s come to visit to apologise about the loss of her dog. The contrast between Lee’s posh London accent and Newman’s sweetness is hilarious. But Lee’s rampage about everyone he kills is just excellent.

In the set up for the next skit with Lee, there are several short bits. Garrett Morris has a monologue as Egypt’s president Anwar Sadat asking for advice on the Middle East, which is followed by a short film by Gary Weis to Foreigner’s “Cold as Ice,” in which a girl repeatedly torments a man with guns and scissors.  Whatabitch. And then in a skit that would never be made now, a family visit Rabbit Hut, a restaurant where they broil rabbits.

Lee, Belushi and Curtin are a team trying to get rid of someone who is haunting them (and that would be Aykroyd). This someone is the tricky dick himself, a Dracula-like Richard Nixon. The group are actually around to get rid of the evil spirit of Watergate that haunts them. Where many skits to follow would only go so far to make a skit about Lee’s horror movie past, it’s clever to bring it into a political level. That’s clever writing.

Meat Loaf’s second performance is decidedly more low-key than the first with the ballad “Two Out of Three Ain’t Bad”. A romantic little way to ending the night.  Though, I was disappointed that Meat Loaf didn’t appear in any sketches (he would in his episode with Curry). But this was a solid episode from a really great era of Saturday Night Live. The writing plays up to Lee’s acting abilities, which makes for a really strange, but enjoyable set of skits.

Christopher Lee was such a gent.