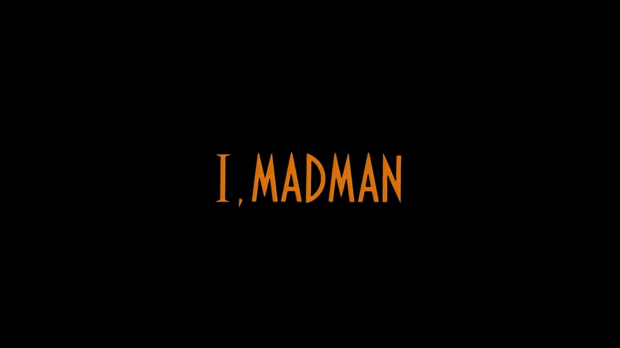 There’s just something so cozy about curling up with a good book – especially when that book is absolutely insane and messed up. Much of my real-life is spent either reading books for work or reading books for pleasure. Most of my interest has been focused on classic suspense and horror for the past five months, ranging from Shirley Jackson to Robert Aickman. But there is one book I have read and re-read that has a bit of gothicness, that sicks with me for a very special reason: Jane Austen’s Northanger Abbey. The young Catherine Morland spends most of her time reading books and imaging she’s been swept away by some sort of evil.

Enter I, Madman or Hardcover, for my UK readers, is a 1989 film about a woman who works in a used book shop. And if that doesn’t sell you, then I don’t know what will!

Though little book seller is, of course, the main character Virginia. She’s a bit more than a bookworm. She does wear those big thick-rimmed dorky glasses, but she has a warped mind. Like the best of us and Ms Morland, she spends most of her time getting freaked out by books and allowing her imagination get the best of her. She enjoys staying alone at home getting the shit scared out of her by reading morbid pulp books.

The author is she most obsessed with is Malcolm Brand, a man who only ever published two books including I, Madman. She searches through the shop for the second book he had published, but with no luck. But when a copy is sitting out side her apartment door, the wheels are set in motion.

Much of the movie flits between Virginia’s reality and her imagination in the book. The main character of I, Madman (the book) is Dr Alan Kessler, a man obsessed with a young, beautiful actress named Anna Templar. Virginia’s obsession with the book creeps out her boring, detective boyfriend Richard plenty. He tells her that he doesn’t like what the book does to her behaviour, but she continues to scare the shit out of herself anyway.

Things begin to get a bit more strange for Virginia the more she gets into her book. One day, she’s at work, she finds a collection of books all from the estate of Malcolm Brand. The collection includes more graphic medical volumes and books on alchemy. Then on her way home, she spots a headline saying that her arch-nemesis (a fellow actress) has been murdered. The red head died, just like the red-headed character in I, Madman has.

But she begins to believe that the character in her book has come out of the book and is wrecking havoc in the real world. After she witnesses the murder of her murder, she tells the police her theory only to be treated like a joke. Which, to be fair, is probably the appropriate reaction.

Taking matters into her own hands, Virginia seeks out Malcolm Brand’s publisher who published the two novels as nonfiction. When she finds the office, it’s now a place that mostly sells smut books. The only information the man has to share is that Brand was insane towards the end of his life, believing that the characters in his book were talking to him. and was apparently killed by animals.

After her acting classmate is murdered just as she predicts, the police are forced to go along with her theory, but only if they claim the man is a copy cat of the madman in the book. Though nothing is better than taking care of business all by yourself. The more the plot heightens, the more you question what’s really happening.

I, Madman is a great movie about different sorts of obsession and the layers of a deranged mind, especially a naive, deranged mind. Jenny Wright is fantastic as Virginia. She’s believable, relatable, but also a whole lot of fun to watch while she totally loses it. But the best part of this film is definitely how great it can be when your imagination gets the best of you.