I’m really not into sports at all, and to be totally be honest,  other than baseball, I’ll probably never will be. But damn, do I really get into the Olympics. Every four years its blissful hours of amazing people doing incredible feats of athleticism.  I love the drama and all the bits in between, especially being able to see the really weird sports that exist out there and the very people who have mastered them (I’m looking at you, trampoline. Slalom canoe).

In honour of the world’s greatest sporting event, I present to you Fatal Games, a 1984 film not really about the Olympics but still includes people totally killing in.

Fatal Games opens with one heck of an opening theme. “TAKE IT ALL THE WAY! Take it to the limit and don’t look back now!” It would give “Sensuous Tiger” a good run for its money. Original songs in these small films is a thing that is tragically rare in movies today. It really builds a sense of intensity, which I can only imagine builds on the sense of dread when the opening scene is about the lack of napkins for the winners’ dinner.

The athletes from Falcon Academy have made the nationals. They a healthy lot of high schoolers that enjoy food fights, “messin’ around” in the gym and awkward dialogue (“Did you look in the refrigerator under the cheese?”). Their coaches are hellbent on making them practice more. These coaches also keep mentioning the Olympics, which I think is a pretty lofty goal considering none of the swimmers even seem to know how to dive into a pool.

One night while the rest of the kids are out celebrating, Nancy stays behind to work out (you know, like an actual athlete). She’s obviously never seen Happy Birthday to Me because everyone knows that working out only means death. The girl hardly gets a set in before she’s impaled by a javelin.

Thank god my husband was around to watch this one with me, “8 out of 10 for execution.” Har har har. 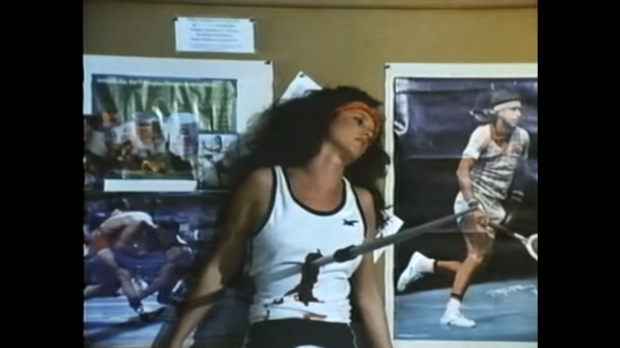 The school’s doctor is insistent on hormone treatment for the athletes. The East Germans and the Russians are doing it, so why not? His nurse doesn’t agree with his methods, especially after the “incidents” that have been happening (and who doesn’t love a good, ominous incident?).  But the film makes a not-so-subtle link between the doctor’s treatments and the next girl that gets plucked off after falling asleep in the sauna.

But neither the coaches, the doctor or the students can keep ignoring how all the medalling athletes keep disappearing. If the poor kids didn’t have enough to worry about, they also have relationship problems on top! I’m entirely sure about what, because I must have dozed off inbetween killings, but I think it’s about a runner getting into some baseball try-outs. For the Pirates, no less.

One night at the school, gymnast Diane suffers an attack from the drugs she’s taking. She’s brought to the nurse’s home for care. The nurse shows Diane the picture of her mother who won a gold medal at an Olympics in the 60s. Diane unleashes a mighty wall of whining, saying that she doesn’t know if working as hard as she does is worth it. She then begs for the nurses help, who seems to reluctantly agree. Then one of the male gymnasts injures his leg during training and asks his girlfriend “to win for the both of us.” And everything turns into a right drama.

And really, it’s a bit of a relief when his girlfriend is picked off. At least the movie remembers what its supposed to be doing.

Convinced that something horrible has happened to his girlfriend, Frank goes to the school to look through lockers for clues about what happened to her. Major props to the guy for sleuthing while on crutches, even if he does get killed of as well in the process.

Diane goes to look for her boyfriend she sees Frank’s body and the killer in their little black tracksuit. A chase ensues, and well, hopefully the killer wasn’t a Olympian because they have a piss-poor shot when trying to knock Diane off.

And then the killer is finally unveiled (or unstocking-masked – whatever). Is it the doctor? The nurse? That crap javelin dude? Perhaps one of those Eastern Germans? I wouldn’t dare ruin the not-so-shocking ending for you. But I will say its fucking mint watching someone trying to look menacing running around with a javelin.

Fatal Games has everything you could want: an excellent theme song, painfully lame humour, blood and laughably outdated shorts. The entire film is pretty tragic, but it somehow remains to be entertainment gold, which is a feat many bad movies can only dream of achieving. Seriously, though… the fuck was that ending?

“Winning isn’t everything – winning is the only thing.”