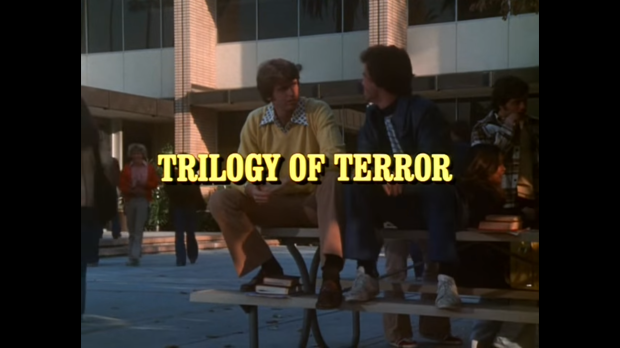 In the past few months I’ve watched a handful of made-for-TV movies. Some are more successful than others, but I can say I’ve acquired quite an affection for these little beauties. The more 70’s, the better. Putting a bit of overly-dramatic thunder and a score begging to be in a soap opera and you’ve got me hooked. This has prompted me to try a few more out which leads us to Trilogy of Terror, which originally aired on ABC in 1975.

Karen Black (who is a real presence in everything she graces) stars in each of the three short stories in four different roles. Each part is a short story by much-loved American writer Richard Matheson (I am Legend, Hell House and the unforgettable Twilight Zone episode “Nightmare at 20,000 Feet”). This made-for-TV entry is actually fairly well remembered, mostly for the spooky-ass Zuni fetish doll that makes an appearance in the third story, “Amelia.”

Julie Eldridge (Black) is a seemingly defenseless and spineless English teacher who falls prey to revolting, horndog Chad. The student spots her walking into the school one day and wonders to his friend what she must look like under all her clothes. He decides to pursue his young teacher with fairly disgusting tactics. He finally convinces her to go on a date with him to a drive-in theatre to see a foreign vampire film.

Chad goes to the concessions and get drinks for the two of them (the concessions looks oddly similar to Drive-In Massacre, so I’ll pretend that this is in some strange drive-in cinematic universe). Idiot Chad drugs his teacher and drags her sleeping body to a hotel where he checks in saying he’s there with his wife (clever nod as he uses the surname Harker). Once in the room, Chad photographs his teacher on the bed. She only wakes up once they arrive at her house.

After developing the photographs, Eldridge receives a phone-call from Chad telling her to meet him. He shows her the photograph and blackmails her into an “agreement.” Her roommate is increasingly worried about the usually-lame Julie’s behaviour.

In Chad’s apartment, it’s Julie’s turn to mix the drinks. She hands him his and he begins to react:

She tells idiot Chad that she has grown bored of him and always eventually becomes bored… of her victims!

Millicent hates her sister Therese (both played by Black). They are two sides of a coin: Millicent is prudish while her blond sister is more adventurous and promiscuous.The story begins on the day of their father’s funeral. Millicent invites Therese’s beau over to tell him the truth: that Therese had a sexual relationship with their father shortly before their mother’s “accidental” death, of which Millicent knows that Therese is guilty of. She thinks her sister was capable of his due to her affinity for the occult.

The beau runs off thinking Millicent is crazy. But the sister continues her vendetta against the other. The two have a growing hatred of each other. Therese tears up Millicent’s room. Millicent continues to meddle in Therese’s personal life.

Millicent’s confidant is their family doctor. The doctor visits one day and his a conversation with Therese (Black in a laughably bad blonde wig). Therese begins to come onto the doctor, who quickly leaves in a hurry.

Learning of her sister’s behaviour with the doctor, Millicent decides to take out Therese with a bit of her own medicine using magics. She creates a voodoo doll of her sister to kill her. When the doctor arrives at the house and finds Therese’s body, he calls for the paramedics to get the corpse.

He tells the men that he is familiar with her as he was her doctor. Therese Millicent had one of the worst cases of dual personality he has ever seen.

Amelia is a woman who has just moved into a sublet and escaped the clutches of her over-bearing mother. She brings home a Zuni fetish doll for her “fella’s” birthday. He’s an archaeologist or something so I suppose that’s a semi-normal gift to give.

She calls her mother to cancel their plans for that evening. The mother (who might be Mrs Bate’s sister) is not heard on the other line, but Amelia struggles to justify why she has other plans. Eventually she just forces herself to be cheery and tells her mom about the doll. As long as it wears the chain, its spirit will be contained from within the doll. The chain, of course, falls of because it wouldn’t be much of a story if it stayed on, would it?

Amelia gets out of her bath and decides to cancel on her fella anyway. She begins to prepare dinner when she notices hears something. She sees the doll has moved and begins to look for it. And before you can ask “what is a fetish doll, anyway?” the little guy begins to attack her with a kitchen knife.

Black begins to scream her way through a chase scene that would make Charles Lee Ray beam in pride. The poor girl tries everything, including throwing it in the oven. She goes to check to see if it’s ready baking yet and breaths in the smoke.

Later, the girl picks up the phone and invites her mother ’round. We see Amelia walk to the door and break the lock. She knees in a position with a grin that could make anyone cry. But as she shows her teeth, she’s clearly been possessed by the doll.

Trilogy of Terror is quality. Probably helps to have such a great actress and writer on board. Karen Black is great enough to pull off each role in great subtlety. Her performances certainly elevates this made-for-TV movie to another league.