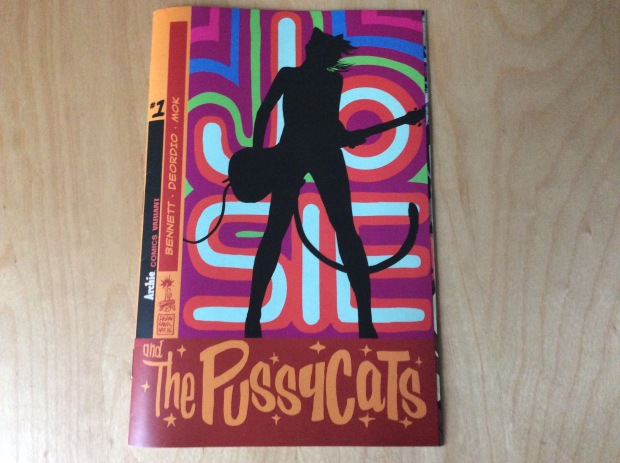 To say I’m enjoying the revamped Archie universe is an understatement – I’m absolutely in love with the contemporary Riverdale. The two horror series have really been something wicked, but I love the wholesomeness of the main line. So when I saw there was going to be a Josie and the Pussycats series, I squealed like a school girl because despite being 25, I still want to grow up to be Josie.

While Betty and Veronica are possibly Archie Comics’ most iconic female characters, they are also still the most problematic. While many series have tried to update their relationship (Adam Hughes did a fab job in his first issue of Betty & Veronica), the girls still play second fiddle to Archie.

Josie and her band are female power through and through and it’s a comic based on female friendship, and the first issue plays out like an origin story.

Small-town folk singer Josie is a girl stuck in the wrong time, and her only fan is bartender Pepper (who was in the Pussycats as an original member until Valerie was introduced in 1969). Josie lives with her roommate Melody, a blonde with a healthy social life – one far too busy to join Josie on her music career.

When Melody finds a stray cat in the street on one of her dates, she joins Josie in volunteering to help out at the local animal shelter at a concert benefit. Here is where they meet Valerie, who works at the shelter and can calm the little kittens and puppies with her magical voice. Josie immediately procures Val for the band and they decide to play at the benefit.

So with six hours to rehearse as a band, the girls are a total bust.

And of course Alexandra is around the stir up trouble for her ex-friend Josie. She tells Val that Josie is only interested in playing solo and tells Melody that Josie only wants to make Mel look stupid on stage when she doesn’t know any of the songs.

Though Alexandra’s plan backfires, and unites the girls together for the first time. Josie admits that she’s not used to playing as a band, and decides to reshuffle the girls around so the trio can work together. The second half of the show goes without a hitch, and the audience loves it (plus the animals at the shelter – too!).

What always pleases me is how well these new series seem to grasp onto the spirit of the original spirit. This issue was so cute, fun, wink-wink, nudge-nudge and so wacky that I’m already counting down the days for the next issue.