What? What’s that? Halloween is over?

No it isn’t. Of course it’s not. I mean technically Halloween occurs on the 31st of every October, but I’m not willing to admit to myself it’s over.

I love Halloween season for many reasons. I love that people get dressed in costume. I love that children get to trick-or-treat and share in that excitement. I really love that this is the one time of the year where people allow themselves to get a bit spooky; shops are done up in (fake) spiderwebs, normally weak-kneed people watch horror films, and shops sell bat socks.

And it’s really a damn shame when it’s all over.

But this year, I’m not letting it die. Instead, I’m going to fill my life with the bits that allows me to relive Halloween every day. Since the UK doesn’t have Thanksgiving, there isn’t a buffer time between Halloween and Christmas (though not many people in the States believe in Thanksgiving anymore either, apparently). I’ll gladly cling on to the fact that Autumn is still here and Christmas is very, very far away.

How to help get through the post-Halloween season:

I read a lot for my job. I read a lot in my real life. Unfortunately, I suffered a rather prolonged reading slump after reading 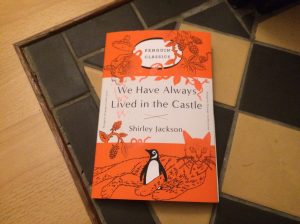 an excellent string of novels in September. Though there were many plans to read some novels that fed into the Halloween spirit, it simply didn’t happen.

But that doesn’t mean that ghost stories aren’t great year-round. And I even think that November may be a better time. While October is beautiful and crisp, it’s really the month of November where things get cold, and things, well, die. The trees stop being gorgeous, vibrant warm colours, but become brown and soggy because there’s no such thing as crisp leaves in England.

This year, Penguin Classics have released a new series of books called Penguin Orange Classics. These books look like the original Penguin Classics with the iconic orange covers, but they’re a bit more detailed with drawings inspired by the book. I’m digging into We Have Always Lived in the Castle by America author Shirely Jackson. I read The Haunting of Hill House back in January. So good.

Also, I just finished the sixth and final volume of Locke & Key by Joe Hill illustrated by Gabriel Rodriguez. So good. If you haven’t read this graphic novel series yet, stop everything and do it now.

2. Buy everything horror-themed and do it now.

One of the best things at MCM Comic Con last weekend was this excellent stand that sold some horror movie related gifts. They were one of the very few stands that did, and they certainly did it in style.

Alleycat Graphics do a load of excellent horror movie themed items from posters to pins to a Ghoulies sticker for your toilet. Everything you need to fill the small parts of your life with everything horror.

I picked up a couple cards from their stand at Comic Con. One is a They Live! birthday card and the other is a Basket Case birthday card for a loving brother.

Do I have a brother? No. Does it matter? No it doesn’t.

Another company I have discovered over the course of the last month is Creepy Co, a collectibles-based brand out of Chicago. I did have to pay a bit for international shipping, but look at these two babies. How could anyone resist? The pins are really high quality. And while the pumpkin has been retired for the season, my Final Girl pin remains on my jacket opposite to my Jason Voorhees hockey mask pin. Subtle, but it makes the point.

3. Reminisce the fuck out of the past Halloween

After the hectic weekend of Comic Con, I was not willing to go anywhere if I didn’t have to. Plus I had a week-long of horrendous headaches that made me useless to writing, reading or watching anything. So my husband and I had an incredibly low-key holida

But if there’s anything that helps you get over the Halloween-blues, it’s remembering the Halloween you had. We had to miss the Prince Charles Cinema’s viewing of Halloween, but we did watch Insidious for the first time. I’m a big fan of James Wan’s Conjuring films, this was one of my less-favourite of his films I’ve seen. Though it did cause my husband to have nightmares that night. So that’s pretty great.

Oh and we made bat-themed cupcakes and blew up ghost and pumpkin balloons. There may not have been any trick-or-treaters, but we did live it up on Halloween. And though the day itself might be over with, I can at least eat the cupcakes.