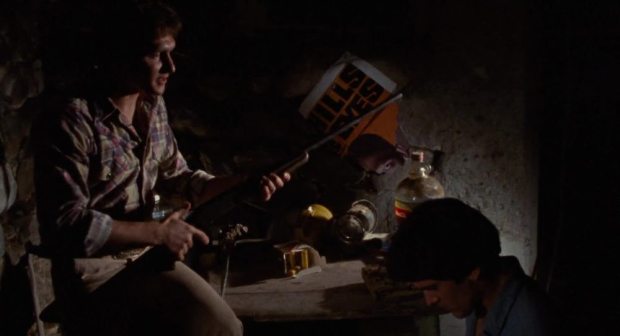 Leave it up to Ash to really know how to make shit worse.

The last episode of Ash vs Evil Dead left us to try and cope with the death of the much-loved Pablo. Turns out Ash is coping as about as well as I did. He is spending most of his time spinning around in the Delta with Pablo’s duct taped corpse in the front seat.

While Kelly is upset, Ruby reminds her that at least Pablo made his short life count for something. Many of Ruby’s mantra’s seem to hit home for Kelly, which will be interesting to see where she plans to take that advice.

While Ash is in the Delta, he wishes he could go back in time. He then has a vision of Pablo’s corpse telling him that he should – to fix the biggest mistake ever made. Ash agrees that he needs to go back in time and grab the Necronomicon before young Ash can ever find it. Hopefully it’s one way to make sure that Pablo never dies.

Ash calls the two women into the Delta and forces Ruby to read out the spell still tattooed onto Pablo’s body. To force into his plan, Ash begins to drive recklessly. Despite knowing that this is probably yet another stupid idea, Ruby panics and agrees, and the three head back into time and into 1980’s Elk Grove.

The three remaining Ghost Beaters head to the cabin, where they are almost immediately split up by that “evil wind” that’s often prowling through the woods. Ash is a bit confused as the evil shouldn’t be released as he and his friends still have yet to return to the cabin.

Ash dodges the evil and heads straight into the cabin, though the cabin doesn’t seem to be in the same order as he remembers it. Namely, he can’t find the Necronomicon.

Meanwhile, Ruby and Kelly wander the woods alone. They can tell they’re being following. Unfortunately, it’s not Pablo. It is, of course, the evil trees. Thankfully it appears to be the non-raping variety, and more of the “I’m going to eat you kind.” But team power beats out evil trees and the two women remain safe… for now.

In the cabin, Ash does his best to make sure everything goes wrong. He steps on a nail that begins to infect his leg with some bad evil. Instead of sawing off his leg like he did his hand, Ash cuts open his leg and sucks out the “poison” – like a snake bite! The leg appears to be okay, but Ash accidentally swallows a bit of the green goop.

The scene of Ash fighting the demon in his own stomach is pretty great. It’s a slapstick scene purely written to show of Bruce Campbell’s great comedic timing. Thankfully he vomits up the little creature in his stomach, and flattens it with a frying pan.

Inevitably, Ash has to go into “the cellar.” There he finds the wife of Professor Knowby (you know, the idiot that brought the Necronomicon over) chain up in the basement. He doesn’t believe her when she says that it’s her husband that’s turned. Which is all good, until the professor arrives with one of his students. The poor girl steps into a bear trap and is caught.

While the professor tells his student that he hopes to posses her with the spirit in his wife, Ash unchains the woman. The wife immediately goes missing, which is bound to only be bad news.

Ash is forced to fight her off while the professor scampers away. And while he tries his best to finish her off, it’s pretty clear that Ash isn’t going to get out of this situation easily.

“Home Again” was easily one of the episodes more darker in tone (yes, including the slapstick scenes). Going back to the cabin is done in a careful way. While the whole time-travelling thing can be a bit over-done, it’s handled really well. Some how, it managed to bring out the best in the series. The over-the-top antics of the show is played to be that way.

Ash is certainly a flawed character, but when Kelly seems to be increasingly aware of it (thanks to Ruby’s mantras), it doesn’t seem like things going forward are going to go well. What these changes in the past will do remains to be seen, but I can only bet that it’s not going to be good.

Bonus for the Easter Egg in the episode. When Ash, Ruby and Kelly arrive in Elk Grove, one of the movie posters visible outside the cinema is for The Hills Have Eyes, a poster that can be seen in the original Evil Dead. This was Raimi’s nod to Craven using a ripped up poster of Jaws in his 1977 film.