So I TOTALLY missed that the Southside Serpents leader was Juggie’s dad in the “The Last Picture Show”. Whoops. (Also, it’s Billy Loomis! How the hell did I miss THAT?). This week’s episode was all about dad’s. Hot dads.

Okay, it was actually about issues much more serious than the topic of Luke Perry’s sweet brown eyes… but…

“In a Lonely Place” opened up with a heck of an opening. Jughead continues is opening voiceover, but is reflecting on where ‘home is.’ Home in his dream in 1950’s sugary-sweet suburban America: Riverdale how it was first envisioned with Betty and Veronica around the table in hair-glory and Jason sitting with a blushing Polly.

But during his sweet, if slightly sinister, dream is interrupted of thoughts of his alcoholic father, FP. Since episode four, it’s been a lingering question about what where Jughead has been staying, as he had been living at the drive-in before it was torn down. Despite the secret being kept for months, Archie discovers his friend’s secret when they bump into each other in the early hours before school.

Jughead shows Archie the closet-under-the-stairs where he’s been living. Good boy Archie immediately invites his friend to stay with him and Fred.

Fred takes it another step and offers FP his old job back at the Andrew’s construction company. Despite his initial decline, his son convinces him to go back to have another shot at bringing his family back together (Jughead’s mother and sister, Jellybean, are elsewhere without the men). This is pretty uncomfortable for Hermione, who owes the Southside Serpents more money. But the pair decide to call it even.

To celebrate, Archie and Jughead invite their father’s out to dinner at Pop’s. While the four joke around (the dads mostly about the old days), it quickly goes south when there’s tension around who pays the bill. FP stares down Fred and reminds him that Fred “owes him.”

Later in the garage, Archie gets the courage to ask FP what he was referring to. FP tells a story about how the dads started the construction company together as partners, but FP’s questionable work decisions got him into jail. After Fred bailed him out, the Andrews used it as a means of getting FP’s half of the company.

When Fred tells his side of the story to Archie, he only says that FP got into trouble on too many occasions, and he couldn’t keep helping him without getting pulled down with. Archie doesn’t really care for his dad’s story, and reminds him that while getting rid of FP – he completely hurt the rest of the family.

FP’s alcoholism reeks throughout the episode. He’s on and off the horse, to the constant cycle of hope and disappointment of Jughead. When he’s pulled into questioning for suspicion of killing Jason, it’s Fred who shows up to help Jughead, not FP. Fred even lies to give Jughead an alibi for the day Jason was killed, and Jughead eventually decides to stay with the Andrews.

Though, Jughead doesn’t completely give up on his dad (whom he obviously loves, dearly, and clearly desires to be loved by). When Archie and Jughead try to guess whether or not FP will show up to work at the construction company the following day, neither can be certain.

But Jughead does have a few things in his life to be giddy about. Well, one thing. And that’s Betty. Their relationship has continued on, so it looks like no asexual Jughead, kids.

Betty has continued her hunt for Polly, who immediately becomes suspect #1 for the Blossoms when they learn that Polly escaped from her “home” the night that the car filled with evidence was torched. After Cheryl tells her mom about Polly to get back on the Vixens, it becomes a race between the two groups to find the girl.

When the Coopers decide to get a leg up on the Blossoms, they hold a press conference stating their confidence that Polly is innocent… and that she’s pregnant. With this news, the three remaining Blossoms look totally ill – especially Cheryl.

But it’s Betty who finds her sister first. Polly is hiding in her parents’ attic until she can escape elsewhere. But a young pregnant needs a lot more than an attic to live in, especially since she’s “keeping her baby ooooh she’s gonna keep her baby OOOOH.”

It’s subtle, but Riverdale has plenty to say about the out-dated ideas of controlling a woman’s body. When Betty says that her parents think Polly is in a “shameful condition,” Veronica simply retorts “What decade is this?” I mean, I know this is just a TV show, but it’s damn relevant.

Yes, shock and surprise: Polly’s parents want her to give up the baby. It’s Cheryl who first comes to the rescue. She approaches Betty and says that they’re now all on the same team thanks to the baby. The Blossoms offer to take in the baby and Polly and help. But of course, Cheryl’s parents are totally sinister in their offerings – meaning to make Polly look unfit to be a parent.

When Cheryl wises up to her parents plan, she warns Polly, who then has to stay with the Lodges. How about that for a sitcom?

There’s also a fun subplot in this week’s episode about Veronica and her mom Hermione. The two try and out-do each other in ruining each other’s lives. Veronica spends frivolously. Hermione calls in the credit cards as stolen. It’s a cute storyline about mother/daughter relationships that, again, is really sweet to watch (even if it is a weird ‘New York’ way of getting along).

Overall, “In a Lonely Place” is one of the more subtle episodes, but really packs plenty of heart into it. While we’re still not certain what Jughead and Archie’s relationship was like before the summer, we can assume it was quite a bit simpler. It would be great to see them just be friends, but their relationship is always getting more complex and it’s fascinating to watch.

A big congratulations to Riverdale as it’s been renewed for a second season. It’s been confirmed that Jason’s death will be solved by the last episode of season 1, while a new big bad will emerge for the next season (perhaps the mayor a la Buffy season three? Hellooo Mayor Wilkins!). I mean, I’m still interested in solving the murder and all, but I’ve been enjoying these characters so much that the murder has almost become secondary to them.

You know, I have to discuss one thing here. I’ve seen lots of people wishing that the opening sequence is what an Archie television series should be. Christ Almighty. Could you imagine that? Archie has always been contemporary – always. People just failed to recognise it before the relaunch. I love the way Archie Comics and Riverdale have been going. It has kept this loved and treasured publisher alive.

It’s one thing to love the classics (seriously, just buy the digests), but to wish the comics stayed the same and thus irrelevant to a new audience is just stupid. It would spell the death for Archie. I welcome it all. I’ll always love my classic comics, but I just can’t stop having fun with all of this. I really can’t. 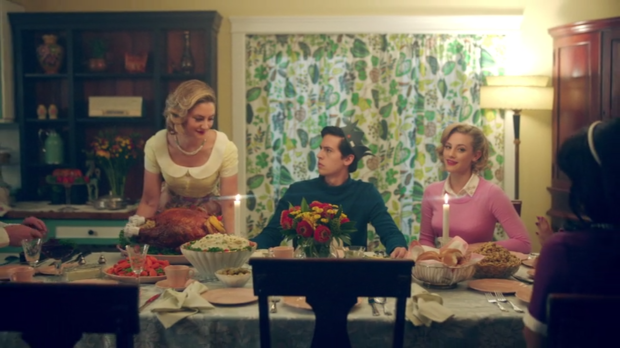 So biggest head-scratcher of the night: what the hell is Jason Blossom’s varsity jacket doing in FP’s stinky trailer?