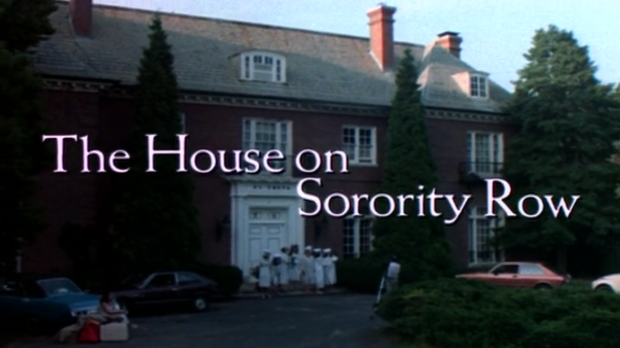 I’ve mentioned in past Wicked Wednesdays that my best friend was in a sorority when we were in college. I used to tease her endlessly about how she was putting a price on her head for choosing to live in a sorority house.

Now, my friend survived those four years (relatively) unscathed. But I now know why: she never killed anyone! Well, that I know of.

The House on Sorority Row is a great classic slasher. But it’s particularly delightful because you get to watch awful people be terrorised for their awful decisions! Yeah, no one getting killed off here who made the “mistake” of having sex or, I dunno, falling asleep. You don’t really need to feel bad for anyone!

On June 19, 1961, a woman goes into a difficult labour. Despite the doctor arriving at her home, the delivery does not go well. Flash forward over two decades later and seven girls from a sorority are graduating. They live together in the sorority house with their odious house mother, Mrs Slater.

Mrs Slater is the woman from the flashback. It doesn’t take much to piece this together, especially considering you see the woman’s face when she’s delivering, but I do think that this movie thinks it can sneak up on you.

Having graduated, the girls are meant to move out of their sorority home by June 19th. But thanks to their ringleader Vicki, they’re all coaxed to stay and get their drink on. When Mrs Slater discovers the girls still in the house, she becomes unnecessarily angry. She continues to do strange and erratic things like slashing Vicki’s waterbed when she walks in on Vicki trying to have sex with her boyfriend.

Vicki decides to get revenge on the house mother after the whole water-bed fiasco. She (clearly being a very persuasive bitch) gets the other graduates to go along with a prank she concocts. The girls steal Mrs Slater’s walking cane while she’s sleeping and put it on a inner tube in the middle of their disgusting pool. They make the old woman get into the pool and try to swim for the cane.

Then Vicki decides to shoot at her house mother. She believes the gun is full of blanks, but there are real bullets in the gun. She ends up killing the old woman and refuses to take sole responsibility. In a panic, the girls wrap up their house mother in towels to make her sink to the bottom of the pool.

This somehow think this is a great idea. Then they have a party! Burdened with their guilt, the seven girls have about as much fun as dancing at a funeral. Katey’s even on a bad blind date (Katey, by the way, is the heroine in this but she mostly plays second fiddle to Vicki). In the woods outside of the house, a random gets a walking stick to the throat.

The girls all panic when they see a girl about to get thrown into the pool. They realise that once the pool lights turn on, people will be able to see Mrs Slater’s corpse at the bottom. They send off one of their own to dismantle the lights, but she’s picked off.

When the lights turn on anyway, the rest of the girls see that there’s no body. They begin to panic when they realise both the corpse and their friend is missing.

One of the others leaves the party to pack (of course) and while she’s there the door up to the attic in her closet begins to open and out pops a corpse wrapped in towels. Upon finding the body, Vicki demands the girls take it to the cemetery and bury it where no one will know.

Most of the girls go along with this plan, but Katey doesn’t. She’s been the thorn in Vicki’s side the entire way through. She stays at the sorority house and looks around for clues. She goes up into the attic where the body fell from.

Upstairs is a bedroom set up as if for a little boy named Eric. The room is filled with old-fashioned toys and a giant clown suit because why the hell not? Her annoying date pops up and pokes around himself. He points out to Katey that there’s a dead bird inside of the cage.

Meanwhile, Vicki and her cohorts are rolling Mrs Slater in a dumpster. They accidentally roll it into a cop car. Several of the other girls are killed off at this point, leaving the number down from seven to three.

Katey attempts to call the police but chickens out. But when she finds a medical alert tag, she gets the idea to pretend Mrs Slater has simply disappeared along with all of her friends. The number on the tag leads her to Dr Nelson Beck. The man was Mrs Slater’s doctor, who believes that his patient was headed towards a psychic breakdown and that she had latent violent tendencies.

When he meets Katey, he agrees that the old woman is completely capable of killing off several young girls all by herself. He tells her that Mrs Slater had a traumatic delivery years ago but still celebrated the birthday of her dead son – June 19th.

The two go to the cemetery, where Katey knows the girls will go next, after finding all the bodies of her friends in the pool. Though they’re too late once they arrive and find Vicki at the bottom of the grave she dug herself. But they also find the body of Mrs Slater, to which the doctor says, “He’s alive.”

He is – not surprisingly – Mrs Slater’s son. Back at the sorority house, Doctor Beck tells Katey that he did experimental fertility treatments on women. Mrs Slater gave birth to a son who had abnormalities and whose condition was worsening.

Katey is injected with a sedative by the doctor, who thinks he will be ruined if word got out about his treatments, and has to fight of the doctor and Eric. But the son takes down the doctor.

Katey takes on Eric (now in the clown suit because what the hell) in his bedroom, attacking him with a headless doll. Eric tumbles down the steps, and Katey becomes relieved that it’s over… OR IS IT?

It’s a pretty guessable plot twist with a pretty typical ending, but The House on Sorority Row just feels a bit above the average slasher. It looks fantastic, for one thing. The pool is a great device. The girls all all pretty great too and the script manages to give a few of them individual personalities.

The prank-gone-wrong is a great way to do kill-by-numbers. I’ve always enjoyed when the killer has an actual motivation to kill off his victims. After watching a slew of snoozers here, I’m quite happy to recommend The House on Sorority Row.