Many of the residents are coming to terms (or rather, not coming to terms) with their new Riverdale. It’s confirmed that Clifford Blossom was using the maple syrup business as a front to smuggle heroin out of Montreal in his trucks.

The discovery of the heroin only puts more pressure on FP, as the sheriff and mayor believe that the Serpents are the ones responsible for selling the drugs in Riverdale. FP is insistent that the gang never pushed any hard drugs, but the gang are an easy scapegoat.

To further push their agenda, Mayor McCoy and Principal Weatherbee ask Betty and Archie to be the face of Riverdale’s 75th Jubilee (a cute nod to Archie comic’s 75th anniversary this year). The adults tell the two kids that they want to celebrate how they all worked together to bring peace to Riverdale. Which, as Betty points out, is not really true. But they reluctantly agree.

But devious, wonderful little Betty has plenty of tricks up her sleeve. She begins to prepare an article about Clifford Blossom and how the Southside Serpents are getting an unfair amount of blame in Jason Blossom’s death. But the Coopers refuse to publish it in their newspaper. They tell her that there is a lot more violence towards the gang and they don’t want Betty to be the next target.

Betty, who is not happy with her new-reunited family’s returned faux-happiness, confronts her mom when Alice tells her off for publishing the story about the Serpents in the Blue and Gold. Alice is angry at her daughter, who ended up getting “go to Hell Serpent Slut” painted on her locker, but Betty turns the tables and begins to question her mom instead.

Alice refuses to answer any of Betty’s questions about the argument she had with Hal on their homecoming night. But eventually, she goes to her daughter and admits that was the night she told Hal that she was pregnant, but they disagreed on how to ‘handle’ the baby. Alice eventually went away to the same place they sent Polly, and she gave the baby – a boy – up for adoption.

While Alice and Betty have their moment of reconciliation, things are not going well for Hermione and Veronica’s increasingly strained relationship. Hermione fired the Serpents from the job site, and wants to buy out Fred Andrews from his part-ownership. Fred, angry that Hermione fired his workers, refuses to sell. And Hermione has the gumption to ask Veronica to have a word with Archie about his father.

Hermione is, of course, desperate to get rid of Fred because of her husband’s return at the end of the month. The less of her relationship with Fred that’s around, the better. But Fred still refuses to sell.

Meanwhile, Fred is probably having a pretty shit week. As well as trying to be forced out of his project, he learns that he can no longer watch Jughead. The boy is sent to the Southside and has to transfer out of Riverdale High.

But Jughead actually handles things pretty well for someone who has been dramatic about every slight against him. He seems to actually fit in more with the, I dunno, ‘rugged’ kids at Southside High. But Betty is fairly convinced that things will change between them, despite her boyfriend’s insistence that it won’t.

His friends go to “save” him from his new school, but it’s completely unnecessary and dramatic. The boy, well, actually looks pretty happy. But the happiness is pretty short-lived when Veronica receives a text from Cheryl saying she’s going to be with Jason.

Poor little rich girl. After the death of her father, the girl is sick of the Blossom fortune and struggles with her relationship with her mom. She abdicates her place on the River Vixens. She gives Jughead her spider brooch (and even apologises!).

But Cheryl is not coping well. She dons her infamous white dress and goes to Sweetwater River. The gang catch her as she’s banging her fists against the ice. It doesn’t seem like the river can hold all of their weight, but when Cheryl actually falls through the ice, the race to help her. Archie busts up his hand trying to smash through the ice, and eventually breaks through – saving the girl.

Despite his damaged hand, Archie still wants to play the Jubilee with the Pussycats. But Josie says she heard about his heroic act and says she wants to play his song, an ode to his friends and what they had been through the past few months.

And Betty gives her speech in solidarity with FP and Jughead. Things look great for the kids, but a whole lot less great for the sheriff, mayor and Principal Weatherbee.

With a victory under the belt, Betty goes with Jughead to FP’s trailer while Archie and Veronica go to her place. A&V finally get it on. And while Juggie and Betty are about to get equally cozy, they’re interrupted. Outside the trailer is a slew of Southside Serpents, who say they will take care of Jughead. FP didn’t rat any of them out to get a shorter prison sentence.

The gang give Jughead one of their jackets, which he happily dons. But as soon as Betty sees him, she looks more disgusted than impressed.

The season wraps up when Archie goes to meet his dad at Pop’s. While Archie is washing his hands in the bathroom, he hears a commotion. When he re-enters the dining area, he sees a robber with a gun pointed at Pop’s head. Fred shakes his head at Archie, who clearly wants to intervene. Both men go to stop things, and a shot is fired – but it’s Fred who takes the bullet. As Jughead’s final voice-over tells us, the violence “was anything but random”.

So if Riverdale thinks they can kill of Luke Perry, they’re in a for a whole lot of angry. But what does it mean? The most obvious explanation is that Fred was a target because he doesn’t want to be bought out. But how did the ski-masked man find Fred anyway?

This show did a pretty great job at building next season’s mysteries while finally closing some doors.

Oh and Cheryl set her house on fire – the only way to “purify” things.

What a top bitch. I love Cheryl.

And that is it for Riverdale season 1! What a ride. I sure as hell had a lot of fun. See you for season 2. 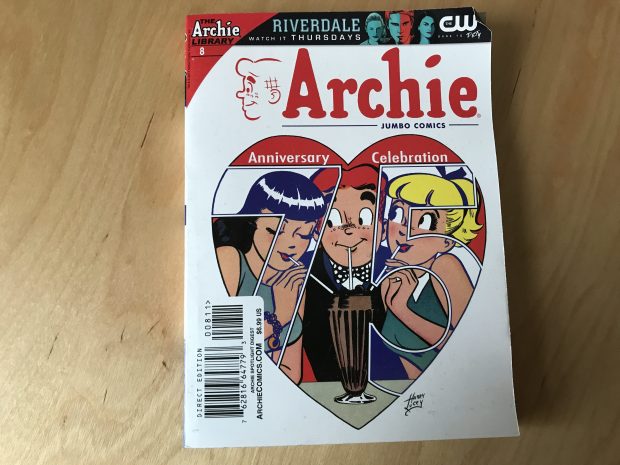