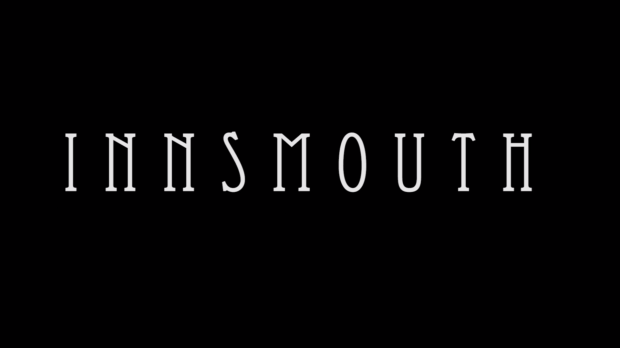 I’ve had a real nightmare with short films as of late. I’m swearing them off for a while, kids, because I really can’t handle much more of this crap.

Innsmouth should be a familiar name to fans of HP Lovecraft. It’s a fictional town that appears in his works, but most prominently, The Shadow Over Innsmouth. I’m not into Lovecraft at all, but I can tell you that this short film really doesn’t have anything in common with Lovecraft’s stories other than wink-wink, nudge-nudge references.

Detective Olmstead is a young detective investigating the death of a young woman. According to a fellow investigator, the body wasn’t in the kill scene, but rather was put there. They then find a number of odd spores/beads on the woman’s back. The candies really accent the large bite taken out of her neck.

During her investigation, Olmstead finds a picture of the victim with another woman and the word “Innsmouth” on the back. Her instincts tell her that’s the direction she needs to go, and after her chief’s approval, she drives to the town.

She doesn’t get very far, though, before a goth in a cape starts stalking her. But before Olmstead can get away, she’s surprised and injected in the neck with a sedative.

When the detective wakes up, she finds herself in a lavishly decorated room. One one introduces herself as Alice Marsh, the daughter of the town’s founder. This news shakes Olmstead up, as Innsmouth was established in 1643.  But after the detective is forced to drink of Marsh’s cup, she becomes much more compliant.

The immortal woman leads Olmstead upstairs and they get into a bath together. Olmstead begins to bathe Marsh, but then Marsh decides to unveil her eye-vagina before gouging out Olmstead’s neck.

The detective’s body is later found by a pool.

And, well, this is the point where I throw up my hands and go “ta-da”. This is yet another story where the eternal, beautiful woman ends up in a photograph with each of her victims. Why is this a trope in movies? It really doesn’t make any sense. It’s just a lazy way of illustrating that the bitch is old but has evaded wrinkles.

Just skip Innsmouth. I can’t even be bothered to write about it, so please don’t bother to watch it.