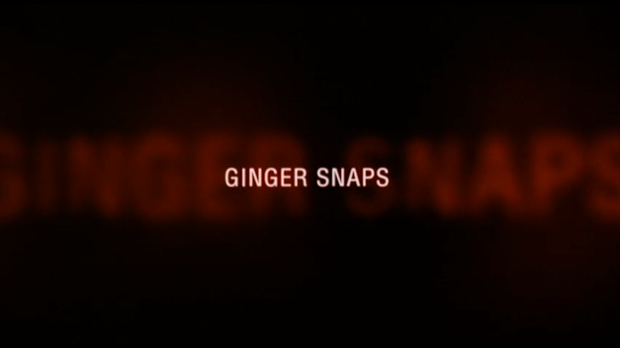 It’s pretty rare that I write about cult films as big as Ginger Snaps, but I have to admit that this is one film that has always passed me by. It’s mostly down to the fact that I usually hate this era of film. The 90’s and early 2000’s were a gross time.

But there’s also something really intimidating about going into a cult film after it has been so hyped up. Maybe people are really bad at building up films, but it’s pretty rare that a film does what it says on the label (or rather, what everyone else says about it). Could it possibly live up to the reputation? (Spoiler alert: it does)

Sisters Ginger and Brigitte are a pair of social outcasts in their suburban, cookie-cutter town. They brood around school and enjoy pastimes like taking photos of each other in which they appear mutilated and dead. But they’re each other’s best friend. They even make a pact with each other to die together.

Their lives aren’t exactly great outside of their sisterhood. The school bully, Trina, makes a constant effort to attack them personally. But this is the type of bitch who brings her Rottweiler to school (is this a Canadian thing?). During gym class one day, Trina overhears the sisters making fun of her and her crush on the local drug-dealer, Sam. When they start their field hockey match, Trina checks the smaller Brigitte, who lands on the corpse of a dog.

To top off a stellar day, Ginger starts to complain that her back hurts her. The girls’ mother notices her daughter’s discomfort at dinner and tells Ginger that she has cramps. Despite the fact that Ginger is 16, this is her first period – Brigette is also a late bloomer when it comes to surfin’ the crimson wave.

Ginger takes getting her first period pretty hard. She even tells Brigitte that she’s received “the curse.” All of this could be sorted with some painkillers and a bath. But instead she decides that going ahead with a plan to kidnap Trina’s dog is somehow a better way to spend her time.

While the girls go to look for the dog, they discover a dog’s corpse in the park. Before they can leave, Ginger is attacked by a beast. She’s dragged off into the nearby woods leaving Brigitte screaming and alone. Brigitte is eventually able to rescue Ginger, but Ginger is already badly scratched on her shoulder. The two run away from the woods, but are still chased by the beast-dog. The animal is hit in the road by Sam the drug dealer’s van and the girls quickly make their escape.

Brigitte quickly realises that her sister isn’t quite the girl from the day before. When the girls reach their bedroom, they notice that Ginger’s severe wounds are already healing. Even worse – the next day Brigitte catches Ginger smoking a join with local douche-bag Jason and his pals, an activity so unlike Ginger.

Drug Dealer Sam hunts down Brigitte and tells her he believes that the thing he hit with his van was a lycanthrope. For Brigitte, all of her sister’s symptoms point directly to werewolf. Back up evidence includes hairy scars, a snarky attitude and a tail.

Ginger picks up a new, “sluttier” reputation with her new look. It is 2000, after all, which means gorgeous girls aren’t noticed until you take off their glasses or put them in a crop top. Jason is the most eager to impress and Ginger gladly accepts his advances. She ‘attacks’ him in his car one night and has unprotected sex with him.

That night, Ginger returns home crying and covered in blood. Brigitte immediately things that Jason has attacked Ginger. Then thinks Ginger hurt Jason, but Ginger admits that she actually killed the neighbour’s dog. Desperate, Ginger asks her sister for help.

The first thing Brigitte tries is piercing Ginger’s stomach with a piece of silver she received from Sam. Brigitte continues going to Sam for his advice, but under the guise that she is the one that is turning into a she-wolf. But all of the attention Brigitte gets from Sam doesn’t go unnoticed, especially by Trina.

Trina confronts Brigitte that night, thinking that Brigitte had stolen her dog. Before Trina can hurt Brigitte, Ginger attacks her. The girls continue to fight in the house. Trina vomits into the sink, then slips and cracks her head on the kitchen counter – killing herself. Panicked, the sisters agree to store the bully in the freezer before moving the corpse out to the shed to be buried.

But the girls lose Trina’s broken-off, frozen fingers when they’re dropped in their backyard. A small clue, but when their father finds the fingers, their mom plays it off as one of the girl’s jokes, but she knows her daughters too well and knows to dig up Trina’s corpse in the shed.

In the meantime, Jason is seriously becoming a werewolf. Instead of an increased blood flow from his vagina, he pisses blood. And unlike Ginger, Jason becomes more grotesque than attractive. But both are becoming powerful and dangerous.

Sam’s next plan for a cure is monkshood, a sort of watered-down version of wolfsbane. Since it’s a perennial and October, neither Sam nor Brigitte think they can find the flower. But thankfully Brigitte’s mom is big on the craft store and has a dried version just hanging around the house.

On Halloween morning, Brigitte locks Ginger in the bathroom and tells her its for her own good. Brigitte goes to Sam gain for help, to advises her that the monkshood would be at its most effective if injected. The two make up their heroine-like concoction, but Sam warns that they have no idea what its going to do Ginger.

Luckily for Brigitte, she stumbles upon Jason terrorising a child in the park. She manages to inject him with the cure as he attacks her, and the boy gets up, seemingly cured.

Though it certainly would just be too easy for everything to go so well. Brigitte realises that her sister has escaped the bathroom and heads to the school. She finds Ginger in the guidance counselor with a corpse.  The werewolf in Ginger continues to escalate as she begins to enjoy drinking blood and taking more victims.

The two sisters become separated and Brigitte is caught by her mother, who tells her she knows about Trina. They go together to pick up Ginger from the local Halloween party at the greenhouse. But before Brigitte leaves, her mother suggests that the three women go off together and make a new start. She even suggests blowing up the house, and says she knows that her husband (and everyone else) would just blame her if she did follow through with her plan.

And, you know, I would say “amen” to that, but you should probably get blamed for blowing up a house if you actually DO blow up your house.

Brigitte goes into the party alone to go after Ginger. She eventually finds her trying to make advances on Sam, who rejects her. Ginger is increasingly wolf-like, so Brigitte cuts herself to contaminate her own blood. Ginger then agrees to go with Brigitte to be cured, but is knocked out by Drug Dealer Sam.

Realising his mistake, Sam drives Brigitte to her house with Ginger in the back of the van. But before they can reach home, Ginger awakes in full werewolf form. When they open the back doors, she escapes into the house.

The two try to make another batch of the cure while trying to avoid Ginger’s wrath. When they finally succeed, Sam offers to go out and give Ginger the injections, but is mauled before he can succeed.

Brigitte finds Sam in the hall, slowly dying next to werewolf-Ginger. She tries to drink his blood to appease Ginger, but ends up vomiting. Angered by her sister’s weakness, Ginger kills Sam and chases Brigitte into the basement.

To protect herself, Brigitte grabs her sister’s knife from their basement bedroom as a form of protection. But when Ginger gives one final lunge, she lands on the knife – not the needle with the cure. Brigitte watches, stunned as her sister dies in front of her.

Sure, it’s a sad, inevitable ending. But it’s all the more unnerving knowing that Brigitte never once gave herself the cure. It could be down to sisterly devotion, or maybe the innate desire to always be more powerful.

Screenwriter Karen Walton (who also wrote for the excellent Orphan Black) taps into something very female in her script. From Ginger’s speech about losing her virginity (“He’s a hero and I’m a lay.”) to their mother’s devotion to her children, Ginger Snaps is an unusual tale in the horror genre. Few horror films explore the theme of family, let alone the love sisters have for each other.

The performances by Emily Perkins and Katharine Isabelle make the film special. Sure their characters are a bit silly in the beginning, but the girls have fantastic chemistry together. She love and fight like real sisters, which is touching in many ways, but also terrifying to watch because tails.

Ginger Snaps does rely heavily on some tired cliches (slow-mo hot girl walks down the halls, douche sex-obsessed boys, zero female friendships), but since it was released in 2000, I’m willing to give it a break. The solid script gives Ginger Snaps solid legs to stand on, and builds successfully on the werewolf myth. I’m glad to say I’ve actually finally watch this thing.