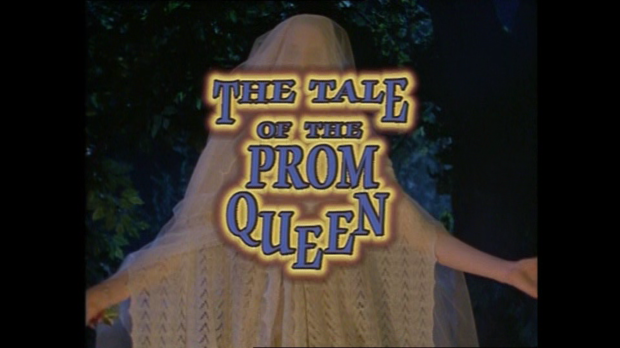 This is one you can call from a mile away, which makes enjoying it slightly difficult. Arguably, a lot of AYAOTD has pretty guessable content, but this is about as cliche as you can get. Kristen herself even describes her story as one that has been told around campfires many times (her version is, of course, the one true version).

“The Tale of the Prom Queen” follows two boys, Jam and Greg as they meet a young girl, Dede, in a cemetery. They tell her a story about “The Prom Queen,” a girl who was killed on her prom might whose ghost appears once every year. The girl was said to have been waiting by the cemetery gates for her date to pick her up when a car came around the corner during the foggy night and hit her.

Jam and Greg tell Dede that they plan on trying to find the girl’s grave and to look for her ghost on the prom night. And Dede eagerly agrees to join them on their search.

The three kids go to the library together to conduct a bit of research. While going through newspapers on microfilm, they finally find an article about the girl’s death. They learn that the prom queen, whose name is Judy, died in 1956. They also learn that her boyfriend Ricky later died after driving his ’55 Chevy off a bridge.

According to the article, he felt guilty because he had never received the message to meet Judy at the cemetery. He and his car were never found (which is kind of confusing when you think about how people know he died when no one found him or his car).

Dede gets the bright idea to try to contact Ricky’s spirit. Despite Greg’s reluctance, Jam and Dede win him over. They boat out onto the river just under the bridge where Ricky supposedly died. Dede tells the boys to join hands with her and concentrate.

The three then have a great time trying to imagine Ricky’s final moments. Dede tells the ‘spirit’ of Ricky about the appointment with his dead girlfriend he’s meant to keep. While concentrating, the kids start to notice some a bubbling sound coming from the water. They then flee when they realise that the bubbles are coming towards them.

Despite Greg really not being into it, he’s sweet enough on Dede to agree to go with her and Jam to the cemetery to look for the prom queen. They’re able to finally locate her grave and on the anniversary of her death, the kids gather at the grave and way.

Before Greg has any length of time to moan, they spot a ghostly figure walking past them with the sound of windchimes. But Greg quick unmasks the ghost and sees it’s a fraud. Jam’s cousin Chuck, to be specific.

When Greg and Dede realise they’ve been had, they look read to leave. That’s before Dede notices a ’55 Chevy rocking into the cemetery. She walks towards the car and begins to hum along to the song on the radio.

Dede then reveals herself to be the ghost of the prom queen (shock) and thanks the boys for their help. She tells them that she had wasn’t able to leave the cemetery until someone brought her out with them. Because of them and their ability to contact Ricky’s spirit. Now in her prom dress, Dede hops into the Chevy.

With a smile from Dede and a rather Fonz-esque thumbs up from Ricky, the ghosts drive off and through the gate of the cemetery. And I think we found the real ending of Grease, ladies and gents.

“The Tale of the Prom Queen” is about as straight forward as AYAOTD gets. I do think they were slightly lazy with this one. For one, all the hints are so heavy. Dede says keen. Dede can’t drink a milkshake. Dede says something vague about once living in this town.

There was a million and one easy ways to add a little twist to this story. It’s pretty boring to watch it otherwise. Though the pacing and look is nice. But if nothing else matters the true question is this: how the hell was Dede wearing 1990’s get-up?

Highlight quotes of the episode:

“It’s a gown, you geek. I’m doing it for effect!” – Kristen, the very serious ghost

Using this weekend to participate in #perusereadathon Finally getting to books I’ve put off for too long!