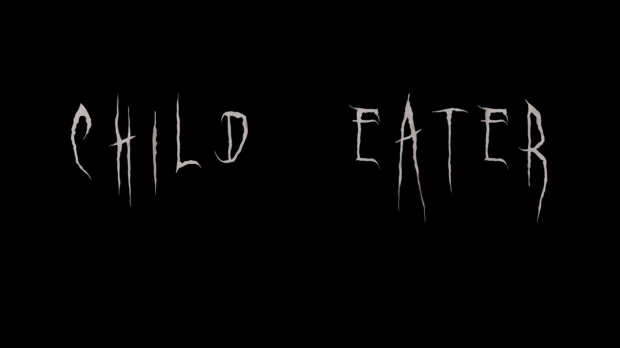 Child Eater is a misleading title, I think. I guess Man Eats the Eyes of Kids is a bit long, but it is memorable, right?

Well, at least something would be. Child Eater is a nicely-made 15-minute short film playing on very traditional horror themes.

Lucas is a young boy under the not-so-watchful eye of his babysitter, Helen. Each time Helen has to leave Lucas alone in his bedroom, she has to lock the door. The boy has begun to have nightmares and sleepwalk at night. Somehow locking the door is the kind thing to do?

After locking Lucas in for the night, Helen goes downstairs where her boyfriend Tom surprises her. She tells him about Lucas and the sleepwalking, then mentions that he’s afraid of Robert Bowery, a sort of local boogeyman that eats the eyes of children to help him see.

While Tom is taunting Helen, the couple hear a noise from up in Lucas’ room. Lucas is crying in his bed, insisting that Bowery is in his closet. Tom mocks the boy, but Helen checks the closet and gives Lucas the all clear.

When Tom and Helen return downstairs, Helen asks Tom if she would make a good mother. She then tells the story of the black stork, a bird that takes the eyes of children then devours them. Not sure if the two are relevant to each other, but babies? I guess?

Then him she’s been having cravings, and learned that she was three-months pregnant earlier that day. Tom immediately asks if it’s his (it is), but before the couple can celebrate, they hear another noise from Lucas’ room.

This time, though, Lucas is gone. They spot him in the distance walking away from the house.  They chase after the child and end up at the Bowery camp as feathers start to fall from the sky.

Inside the camp the couple find Lucas. He’s shaken up, but he’s a lot worse off when Tom is grabbed and his eyes are removed by a hidden figure. Helen and Lucas make a run for it back to the house and become separated.

In the house, Helen hears someone else and sees a flashlight. She locks herself in Lucas’ bedroom and hides in the closet. But Bowery is waiting for her and licks her cheek.

Lucas finds Helen and they go to hide in the basement. Lucas tells Helen that they just need to be quite because Bowery can’t see them. But of course they trick over some stupid toys in the room and Bowery is alerted to their presence.

Bowery throws Helen aside and kills the boy. Helen stabs Bowery, supposedly killing him. But when she leaves the house, she finds a feather from the black stork. Bowery pops up from behind the babysitter telling her, “They’re best when they’re fresh.”

I have to say, I know nothing about babies. I have two nephews, but I was not at all present for when my sister’s pregnancies or around when the boys were very little. It wasn’t until my good childhood friend became pregnant that I learned anything about babies.

But thanks to Child Killer, I now know that babies will have developed eyes by the time they are 9-weeks old. So that’s exciting. Helen’s baby would have had eyes. Bowery sure knows how to pick ’em. Eh? Eh?

Child Killer was an fairly enjoyable way to spend the time, but again, it’s not exactly mind bending. The acting, though, was quite good for a short film and I really was rooting for Helen. And to create that in less than 15 minutes is a pretty good job.