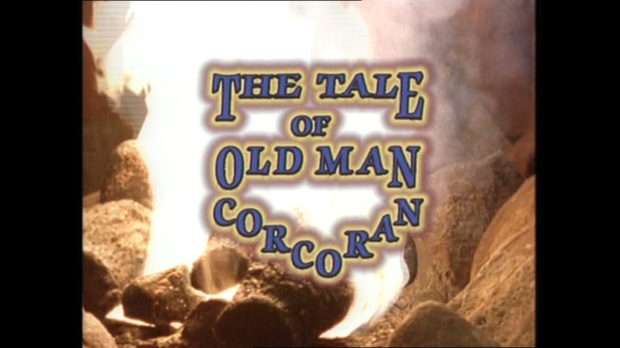 Growing up, the popular night game of choice was Ghost in the Graveyard. Essentially, it was just a game to see how terrified we could make each other by hiding the dark.

In this week’s episode it seems that Kiki has a similar idea when she makes the Midnight Society play a game of hide-and-seek before she begins her tale.

Hide-and-seek game in Kiki’s story is a bit more frightening. According to Kiki, you’ll never who when you’ll get caught and by whom.

In “The Tale of Old Man Corcoran,” a pair of brothers move to a new suburb after living in a rough part of the town. Jack and Kenny are still adjusting to their new lives, and still have yet to make any friends.

While playing around in their front yard one day, a boy on a bicycle stops and introduces himself as Marshall. He invites the boys to join him and his friends at their game of hide-and-seek that night. Marshall’s friends keep their distance, looking like a rather unfriend gaggle of children on bikes.

While Jack is initially not interested, when Marshall insinuates that the boys are being chicken, he quickly agrees. So that night, the brothers follow Marshall’s directions to the game. When they arrive, they find that the game takes place in a foggy graveyard. Kenny becomes scared, but Jack is determined to not appear scared. He hops the fence, and Kenny follows.

When they finally find Marshall and his friends, Marshall makes the introductions. One girl, Cissy Vernon, looks particularly displeased that the boys have joined their game. To try to scare them away, she begins to tell the brothers about Old Man Corcoran. She says that he was once the groundskeeper who dug the graves by hand in the cemetery. Some people thought he was crazy. He supposedly chopped the hands off a boy who stole from him.

But Old Man Corcoran died one day after falling into one of his graves and was buried alive. But some people say he’s still walking the graveyard.

After that delightful tale, the boys are told to hide and they can begin the game. While running through the cemetery, they spot an open grave. Jack suggests that it would be the perfect place to hide, but Kenny disagrees. They suddenly hear the sound of a harmonica, and follow it into the woods where they find an old shack, which they believe to belong to Corcoran.

The brothers believe they’ve been set up for a joke, but when they see the harmonica with “Corcoran” etched in it, they flee. Just as they return to the graveyard, the game of hide-and-seek ends. But before they can move, the brothers bump into a ghostly man with an axe in his hands. Frightened, the boys flee the graveyard and go home.

The following day, Marshall and his gang arrive at Kenny and Jack’s house. When they’re called chickens again, Jack immediately agrees to another game of hide-and-seek.

That night, before the brothers arrive, Cissy argues with Marshall about the brothers joining their game. She tells him that she didn’t think there would be any new members to their group after her. But the conversation stops when Jack and Kenny arrive to join the game.

This time, it’s the boys’ turn to seek. While walking the graveyard, they hear Corcoran’s harmonica again, and Jack decides he’s going to steal the harmonica to prove to the other children that he’s not afraid.

When they arrive back at the shack, they see Corcoran chopping wood. When he walks away, Jack enters the shack while Kenny goes to find the other children.

As Jack begins searching the shack, he becomes panicked. But Kenny arrives, having found the harmonica. Jack hands Kenny his flashlight to hold, but someone else kindly takes it. When the boys notice neither of them is holding onto the flashlight, they discover that they are in the same room as Old Man Corcoran.

Fleeing from the shack, they find Cissy hiding in a grave. She tells them to go away and find their own. When Kenny says he doesn’t see her name on it, she says (to herself, as the boys have run again)  that maybe they should look closer.

Kenny and Jack find Marshall and show him the harmonica, but he doesn’t believe them. But Old Man Corcoran pops up from behind the boys, demanding his harmonica back. He asks what the boys are doing in the graveyard, and they reply that they’ve been playing hide-and-seek, Corcoran asks why they’re playing alone.

The brothers start to tell Corcoran the names of the children they’re playing with, but the man stops them, saying that those are the names of dead children. The boys suddenly realise that they are laying on a grave – Marshall’s grave, which is covered in grass as he’s been dead since 1978.

Thanks to Corcoran, the children weren’t buried alive during the game, like the other children had been before them.

“The Tale of Old Man Corcoran” is easily one of the highlights of season 2. There are great scares, a great twist, and plenty of open-ended mystery to make it feel like a urban legend.

One odd inconsistency about AYAOTD is whether or not ghosts have the ability to wear contemporary fashions. A boy who died in the ’70s could possibly go by unnoticed in the ’90’s, but I think we’re pushing it. How do ghosts get new clothes? Do you have unlimited fashion options in the after life?

Hopefully these are the important questions we get answers for in seasons 3.

But that’s a wrap on season 2 of Are You Afraid of the Dark? And I’m afraid that that’s me done with recaps until the new year.