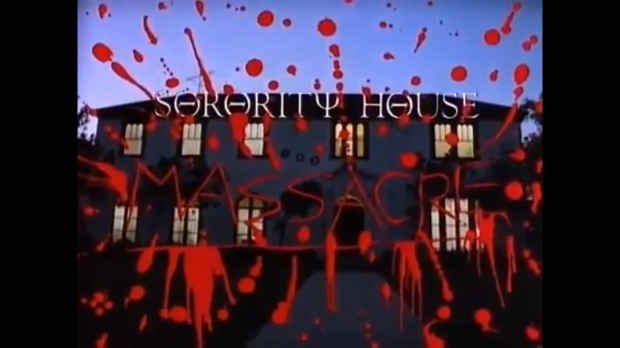 When choosing my last film for Women in Horror Month, I wanted to pick something that sounded a bit fun. When I saw this was another Roger Corman produced movie from the Slumber Party Massacre era, I thought this would be a great pick.

Beth is a young university student who is spending the weekend at a sorority where her friends live. She spent her life living with her aunt, who had recently passed away, leaving Beth alone. As most of the students are away for the weekend, Beth and her three friends have the whole house to themselves.

When Beth first arrives, though, she begins to have some strange visions inside the house. They’re flashes of dreams or memories of the house being decorated in a different way, and a man appearing at times.

The girls agree to have a party, and as they receive the decorations, their boyfriends arrive. The kids settle in for what is definitely their last night on earth.

Meanwhile, somewhere else on that earth, a man named Bobby is spending his time as a patient at a mental hospital. He also begins to have visions, which make him act erratically. After being studied by his doctor, he manages to escape the hospital and steal a knife from a local store.

One of Beth’s friends tells the kids about the “ghost story” of the house. In a very Ronald DeFeo Jr way, a man murders his entire family one night, seemingly for no apparent reason. The story scares the pants out of Beth, who leaves the room and eventually falls asleep to have another nightmare. In this nightmare, she dreams of a stabbing.

When her friends wake her up from her screaming, she tells them about the dream. She takes them to the fireplace where she says the killer hid his knife. Though they’re reluctant to believe her, her friends do find an old knife hidden away in the bricks of the fireplace.

This is when, of course, the kids begin to get knocked off one by one. As she continues on unaware of the murders, Beth slowly realises that she has a connection to the murders that occurred in the house years before.

Bobby eventually gets in the house, and only Beth, Linda and Sara are left. But Sara gets herself killed when the girls are cornered in the back lawn. Before Bobby attacks her with his knife, though, he begins to call her by his another one of his sister’s names.

As Linda and Beth hide away, Beth admits that she thinks she’s Bobby’s sister. Bobby keeps calling her Laura. Laura being her real first name, and Beth her middle.

Unfortunately Beth and Bobby never really get that heart-to-heart siblings need to work things out. Bobby kills Linda after a few fake-out deaths, and Beth kills Bobby just as the police arrive.

Beth sees another vision of Bobby as she’s in the hospital. I think it’s meant to imply that Bobby might still be alive.

I mostly think she’s just a little stressed out. Maybe she should have taken that weekend to get away.

Sorority House Massacre was written and directed by Carol Frank. This being the only writing and directing credit to her name according to IMDB. There are some moments I did appreciate in this film, but I do have to acknowledge that Frank wrote some solid female friendships here. The girls actually felt like they wanted to protect each other in the end, and I really appreciate that.

But there wasn’t much originality in this. As mentioned, the back story was lifted from Amityville Horror with the sibling survival story from Halloween. Plus the visions of death very similar to Nightmare on Elm Street. If it’s going to be derivative, I’d at least expect some interesting little spin. But there isn’t here. No drill-guitar wielding demon from your dreams, either.

The psychic connection between brother and sister reminded me of Laurie Strode and Michael Myers. But I wish that this connection would have been more explained or explored further. I dunno. Just because she survived doesn’t really mean much to me. I think the film got sidetracked by throwing in a sorority (though there was very little sorority going-ons in this one).

I can see why this is a bit of a cult thing. For one, the script can be pretty bad. (“Do you think this place could be haunted?” “I think you’re haunted.”) But it also seems to have a bit of heart. It didn’t work for me, but such are things.

Also, at this point I’ve surely watched ever sorority-themed horror movie. Right? How could there be any more?

Those answers next time on Women in Horror Month.