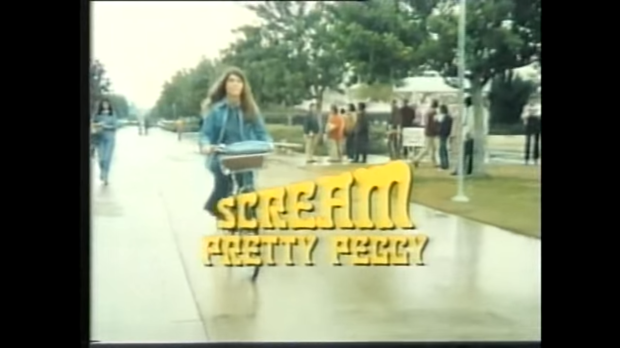 One of the things about horror films that is simultaneously amazing and painful to watch is golden-era Hollywood icons “lowering” themselves to the genre.

Case and point: Bette Davis. While originally known for her great dramatic roles, her later career was marked with much more horror/thrillers such as Whatever Happened to Baby Jane? But the last decades of her life had her in over a dozen TV movies.

One of them is the 1973 thriller Scream, Pretty Peggy, which originally aired on ABC.

Scream, Pretty Peggy follows young art student, Peggy (go figure). Desperate for a job, she takes work as a house keeper for the wealthy Elliott family. When she arrives at the house, she’s turned away by the elderly Mrs Elliott (Davis), but her son Jeffrey stops her and invites the student in.

Bright, perky Peggy gets herself the job, and even manages to earn herself more money in the negotiations. Charmed by the weird girl, Jeffrey allows her to even bother him while he work on his sculptures. But she has one rule: stay away from the rooms above the garage.

During her first day, Peggy sees a photograph of a young woman, who Mrs Elliott explains is her daughter Jennifer. She claims that Jennifer is in Europe.

Each night she heads back home from work, Peggy notices that she’s being followed by a car. She eventually confronts the man, who says he is Thornton, father of the last girl who worked for the Elliotts. He explains that he hasn’t heard from his daughter, but Peggy is unable to help him. When he arrives at the Elliotts’ house, they claim to know nothing either.

Peggy eventually moves in with the Elliotts with Mrs Elliott injures her leg. Her first night in the house she awakes to the sound of a banging door and spots that the garage door is open. When she goes to investigate, she sees a figure in a white gown go up to the rooms above the garage.

When she confronts Jeffrey about it, he admits that Jennifer is not in Europe, but living above the garage. She’s insane, but the family couldn’t bare to lock her up. Peggy then becomes determined to make friends with Jennifer, despite being warned away by both Jeffrey and Mrs Elliott. Mrs Elliott continuously warns Peggy away, but the girl (increasingly enamored with Jeffrey) refuses.

Peggy finds an item with Thornton’s name on it, and decides to try and contact him. The place where he’s staying inform her that he hasn’t been seen in a couple days. And upon investigating, Peggy sees the man’s car locked away in the garage.

Knowing that something is not right, Peggy tries to hunt down Jeffrey. While in Jeffrey’s studio, she’s attacked by the figure in the white dress. Peggy manages to escape and finds Mrs Elliott in her room. She tells the woman what has happened, saying that it was Jennifer. But Mrs Elliott only tells Peggy, “It’s all your fault.”

Jeffrey is finally found, and Peggy tells him about Jennifer’s attack. He goes up to Jennifer’s rooms above the garage to confront his sister. Peggy and Mrs Elliott watch from outside.

Jeffrey emerges and informs them that he has killed Jennifer. She tried to attack him, and she fell on her own knife. When Peggy tries to call the police, she’s ordered not to.

Frustrated and confused, Peggy goes to Jeffrey’s studio and tries to talk to him. Only Jeffrey isn’t there – it’s Jennifer. Or rather, ‘Jennifer’ in Jeffrey’s mind (basically Jeff wearing some shit make-up). ‘Jennifer’ tries to attack Peggy, but is shot by Mrs Elliott.

Mrs Elliott neatly wraps up the story, telling Peggy that Jeffrey killed Jennifer when she tried to leave for Europe to get married. He hid her body in one of his sculptures, and ‘Jennifer’ began to take over his mind. Each time he was with a woman, the Jennifer part of his brain became jealous and violent.

So basically, don’t killer your sister.

While the ending is an exposition dump, it doesn’t detract too much from the movie overall. Scream, Pretty Peggy is a great film, TV movie or no. Honestly, Davis is such a scene-stealer. Completely magnetic with even the most mundane lines thrown at her.

While the twist is by no means original, it’s still fun. And Scream, Pretty Peggy have some great, subtle spooky moments that I loved. Peggy is quite an unusual character for a horror film. She’s resilient and bouncy, and a touch obnoxious (but I liked her anyway). I say give this piece a go. If anything, it’s just a joy to see Davis on screen.