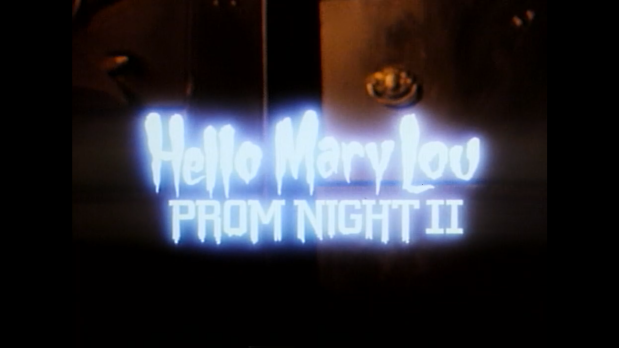 Prom Night II is a sequel only by name. The Hammonds don’t make an appearance, and there isn’t even a reference to the events of the film. It airs on the side of paranormal more than a straight-forward slasher. Instead, if you haven’t caught on by now, Hello Mary Lou: Prom Night II is mostly about some girl named Mary Lou.

In 1957, Mary Lou is queen of her school. She’s provocative and promiscuous, and she loves letting people know. On prom night, Mary Lou leads around her date Billy as if on a leash. He gives her a ring (seemingly any boy would give her anything), and she sends him away to get her punch. She takes her opportunity to run off and shack up with a boy named Buddy.

Billy catches the two canoodling and becomes upset, though Mary Lou breaks up with him and sends him away. Billy decides to get his revenge on her when he finds a stink bomb in the trash of the boys’ toilets. When Mary Lou is announced queen, she takes the stage, and Billy throws the stink bomb on her. Only instead of going off, the flame sets her dress on fire and the girl goes up in flames.

Thirty years later, Vicki lives a much different (actually more 50’s) lifestyle. She’s restricted by her super-religious mother, and only goes with one boy, Craig. Her mother is a monster, and doesn’t allow her daughter to go shopping for a prom dress. So Vicki takes it upon herself to search the school prop room after her friend Jesse suggests it. She finds an old trunk, and in that a crow, a ring and a cape – all once belonging to Mary Lou.

But when Vicki opens the trunk, she doesn’t just find some great vintage items, but unleashes the vengeful ghost of a sexually-hungry prom queen.

Vicki brings the old things to her art class, which catches Jess’s eye. When she’s alone after school, Jess tries on Mary Lou’s things and even removes a gem from the tiara. And that little dabble in restoration ends Jess’s life. An unseen force wraps the cape around Jess, strangling her before tossing her out the window to her death.

The girl’s death is deemed as a suicide, due to the fact that she was pregnant. But Vicki is more suspicious. She has bigger things to worry about, though, like the creepy-ass visions she’s getting (including the worst one: her rocking horse growing a mother of a tongue). Her personality begins to change as well.

She goes to see the local priest, who is Buddy – Mary Lou’s former side-boy. Vicki admits that she thinks something is going on with Mary Lou. Father Cooper then goes to see Principal Nordham, who is both Craig’s father and Mary Lou’s jilted boyfriend. The two men had formed a weird friendship in the years after Mary Lou’s death. But Nordham refuses to believe Father Cooper when he claims that Mary Lou is back.

In school one day, Vicki slaps one of her fellow students. During detention, she’s sucked into the chalk board and emerges full-on Mary Lou. She kills off Vicki’s best friend by crushing her in a locker with telepathic powers! Mary Lou can do anything!

She uses those powers on prom night to throw Vicki’s mother through their glass door. In fairness to Vicki’s mother, she just caught ‘Vicki’ making out with Vicki’s dad. But like a boss, Vicki/Mary Lou heads off to prom like the demonic boss she is.

Nordham, worried about Vicki’s behaviour, goes to dig up Mary Lou’s grave, but instead finds the corpse of Father Cooper. Nordham knocks Craig out so he can’t go to the prom.

At the prom Vicki/Mary Lou kills nerdy Josh, who was trying to rig the prom queen vote in mean-girl Kelly’s favour. She manages to fix things (with her computer-manipulating powers?) and wins prom queen.

But in a very 2018 version of Carrie, Vicki/Mary Lou is shot by Nordham when she goes to get her crown. The girl is seemingly dead, but the charred corpse of Mary Lou emerges from Vicki’s body to wreck havoc on the students. Craig arrives in the nick of time to be chased around the school!

Craig gets to the prop room, where Mary Lou opens up a vortex in the trunk. He’s nearly pulled in when Nordham calls Mary Lou’s name. He gives her the crown and kisses her, seemingly freeing Mary Lou’s spirit. Craig opens the trunk and finds a very slime-covered Vicki inside. But it’s definitely gentle little Vicki, no Mary Lou.

And it’s all over right? Mary Lou got what she wanted. Killed one of her creepy boyfriends, killed a few students. But it wouldn’t be an 80’s slasher without a half-hearted twist. Nordham takes Vicki (who seems ok despite being shot multiple times in the chest) and Craig into the car to go home.

But the radio turns on, playing Ronnie Hawkins’ “Mary Lou.” Nordham turns to the kids, “They’re playing our song!” The man is wearing his sweetheart’s ring, carrying on the sequence of possessions.

I know everyone makes this obligatory sequel joke, but I think Prom Night II: Electric Boogaloo sounds like it would be a great film. I’d watch it. But seriously, Mary Lou is a pretty solid not-really-sequel sequel. It’s the right amount of outrageous 80’s that it’s pretty gross (that damn horse) and fun.

Mary Lou’s powers are a bit ridiculous. She can do pretty much anything. How did she get her demonic powers? Her being a ghost capable of possession I’d buy, but telekinesis and technokinesis is a bit much.

And I love the 50’s, but the styling in the movie was pretty off. “Mary Lou” and Ricky Nelson’s “Hello Mary Lou” weren’t even recorded in 1957. Which, you know, details. But it wasn’t just that. Why the hell was Mary Lou’s catchphrase “See you later…alligator.” Like what? I thought this woman was supposed to be sexy. I doubt that would get anyone’s heart racing, even in 1957.

The biggest issue most people have with this movie is the very heaving nods to other, better films. I say it works if you view it as an homage. Mary Lou is clearly not a film with the intentions of doing anything original. But the lifting of other films is so overt, it comes off as more amusing than lazy.

Hello Mary Lou: Prom Night II is certainly more fun than its predecessor. Don’t set yourself any expectations and you might be pleasantly surprised.

Come for the weird catchphrases. Stay for the creepy horse tongue.