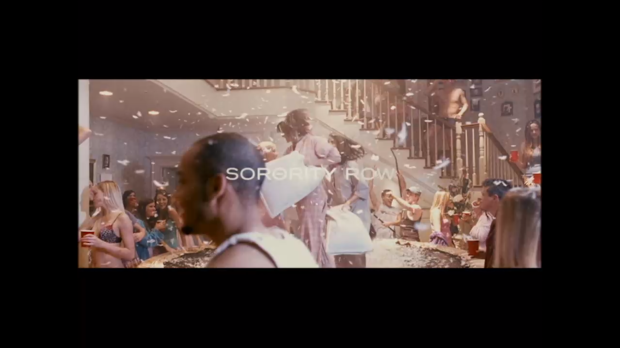 I try not to pre-judge movies. I’d say I’m pretty good at judging character, and pretty bad at judging movies. But with a film like Sorority Row it’s hard not to think it’s crap before hitting play. Throw in “starring Rumer Willis” and it would be hard to convince me otherwise. Top it off with no-longer-relevant reality TV stars and we’ve pretty much got the verdict set in stone before even hitting play.

Sorority Row is a 21-century remake of the classic slasher The House on Sorority Row. It amps up the gore, body count and language, but it sort of forgot to make a good script. The original was by no means great. It’s probably Good with a capital ‘g’ but it is head-and-shoulders superior to its remake.

For one, the plot twist in the original was good (or was at least fun). But I’m getting ahead of myself here. As far as plot goes, if you’ve seen the original, you can guess how the update goes.

A group of irritating sorority sisters decide to prank a boy called Garrett, who had cheated on his girlfriend Megan. They pretend that she’s overdosed on the roofies she’s seen given, and Megan fakes her own death. The girls and Garrett drive the ‘body’ to a ‘lake’ (more like a quarry) to ‘dispose of it’. But Garrett actually panics and stabs Megan in the chest with a tire iron, to empty her lungs of air so she doesn’t float in the water.

This, of course, actually kills Megan. And that’s not really part of the plan. They girls dump Megan’s body in a mineshaft and agree not to tell anyone. Everyone but Cassidy, who is adamant that they go to the police. Her sisters threaten to turn on her, so she agrees to keep the secret.

Eight months later, the sisters all graduate. Over the course of the night, they’re all killed off. The film attempts to up the suspense by using newer technologies like texting. Each of the girls receive a text from ‘Megan’. But it’s of course not Megan because girl has a damn tire iron in her chest.

Oh, and they find Megan’s decomposing corpse in the bathroom. Which pretty much puts their ‘Megan-is-the-killer’ theory to rest.

In the end, the killer ends up being Cassidy’s boring boyfriend. Why? Because the other sisters didn’t keep their secret very well. He needed everyone who knew the story to be dead so that the two of them can have a good future. But he dies. And however months later we see that Garrett is still alive even though he was clearly run-over multiple times by Jessica in a car.

Why are these girls so bad at killing people? Even illegal fertility treatments is a more convincing ending.

Sorority Row is just a film of its era. It’s lazy, cliched and predictable. Well, maybe not that ending but it’s so stupid why would you want do guess it?

In the original, the girls are 100% responsible for the death of their housemother. Here, the girls are actually not guilty. So it makes it all a little less convincing. They keep claiming their guilty of her death, but they’re not. They’re just guilty of being silly and dumping a corpse.

There’s a lot I didn’t like about Sorority Row. But one thing I will give it is this: Leah Pipes as bad bitch Jessica is absolutely hilarious. I would force myself to watch this movie again, if only for her performance. Easily the standout of the film.

I suppose, though. If you know something is probably not going to be to your taste, you should probably leave it alone. I brought this upon myself and I really only have myself to blame.