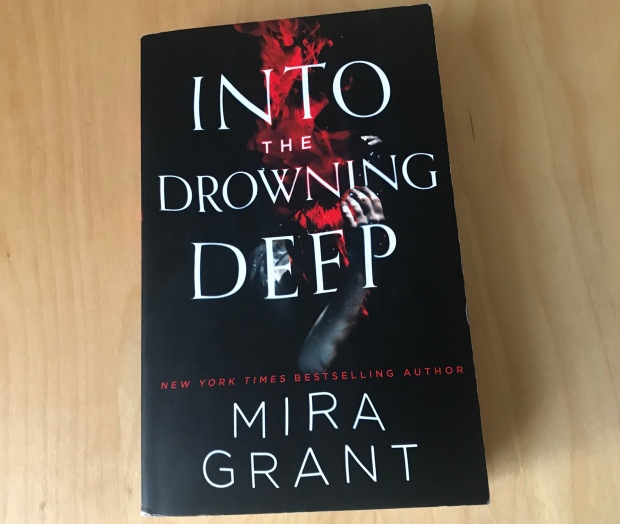 It’s the final week of Women in Horror Month. That’s a whole decade of celebrating the women who contribute to the horror genre.

For the last couple years, I’ve solely focused on contributions to film. But this week I thought I’d chat about the novel Into the Drowning Deep by Mira Grant.

Grant, who also published under her real name, Seanan McGuire, is a bit of a legend. She’s won the John W Campbell Award for Best New Writer. But she’s also won a Nebula, Hugo and Locus for her work in fantasy. Her Wayward Children series is impossibly popular on the likes of BookTube. Her names are ones I know, but somehow have never gotten around to reading. Until this month, that is.

Into the Drowning Deep is a horror novel set on a ship. But think more Jaws than Ghost Ship with added killer mermaid-like beasts. It’s about what happens when we discover that we are the prey, not the predators. “Did we really think we were the apex predators of the world?”

In 2015, the entertainment company Imagine sent a ship full of scientists and film crew to the Mariana Trench to discover mermaids. The company, headed by its very own Roger Corman-figure (weird how he keeps coming up this month), sought its next biggest hit. Imagine Entertainment thrived on cheaply-made sci fi and horror movies in the past, but found more recent success with a string of “mockmentary”-style horror films chasing mythical beasts.

But unfortunately the crew of the Atargatis, they found what they were looking for.

The boat is eventually found empty. All that Imagine Entertainment have to go on is the found footage of the incidents on the beach. When some of that footage was leaked to the public, a debate started about whether or not the footage was faked or real.

Years later in 2022, a second team sets sail to find out the entire truth of the doomed Atargatis. On board the Melusine is scientist Tory, the sister of one of the crew lost on the Atargatis. She and several other scientists seek the biggest scientific discovery of their generation.

But like the voyage before theirs, the mermaids quickly find the soft, tasty humans waiting on their tin can. When the mermaids start to attack, it’s up to Tory and both the scientists and its crew to band together and discover how to save themselves.

Much of Into the Drowning Deep focuses on the science much of the passengers are working on. But between those scenes, Grant fills the pages with eerie, slasher-movie-like scenes with the “mermaids”. The suspense is built victim by victim, growing a sense of dread and impending doom.

This is a pretty long book, and it was certainly a struggle to get through the first 200 pages or so (this comes to pretty heft 484 pages). Horror is best when it’s snappy and succinct. I found the moments of action incredibly readable. And the gore was splendidly described. I love a bit of face loss!

Like a slasher movie, you can pick out which characters are going to die first and which one’s you’d like to see have a painful death. Many of the characters do silly things, as horror characters often do. It prompts a similar reaction to when their screen counterparts do idiotic things on screen.

I personally didn’t enjoy much of the science nonsense. And unfortunately for me, it was about 80% of this book. It’s too much detail and long-winded scenes reiterating previous ones. Accord to many reviews, the science is very inaccurate anyway.

But regardless of the accuracy, Grant still manages to drive home her message: “Humans had the potential for good, although they did not always make the effort.” We are shown the what-cold-be’s of global warming and the destruction caused by changing the once-balanced ecosystem of the ocean. In fairness, killer mermaids are probably what we deserve.

In the Drowning Deep is certainly an unsettling book at the best of times. I’m certainly not in any rush to get on a cruise ship. If there’s something waiting in the ocean for us, I’d like for it to keep waiting, please.