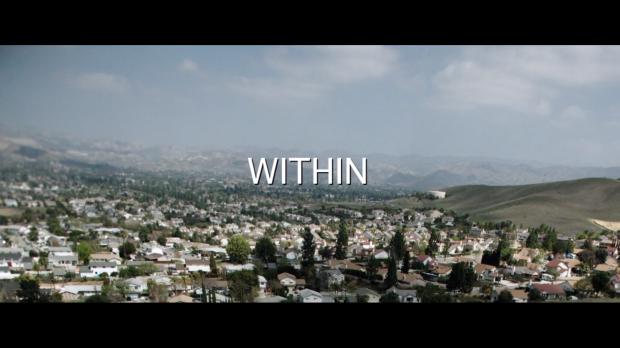 I rarely read reviews before I watch movies for this blog. I didn’t make an exception for Within, but I really wish I had. This was truly one of the more confounding films I’ve watched in a long, long time.

At the surface, this is very the set-up for typical haunted house trope fest. A family move into a new home in suburbia. There’s the oblivious dad, the hot new mom, and the irrtated “bad girl” daughter. They immediately begin noticing strange things in the house, particularly the daughter Hannah. And of course they eventually discover that a family died there by murder-suicide. They very much are like the new family: two parents and a daughter.

Hannah is sentenced by her father, John, to cleaning out the pervious family’s things out of their garage. She begins to unpack their lives and learn more things about them. She learns from a neighbour that the previous family had simply disappeared.

Meanwhile, she’s also battling creep ‘neighbour’ Ray, a locksmith. He offers to change the locks on the family’s house, but instantly creeps out mother Melanie too much.

Ray is eventually outseted as a squater in the next-door house. As revenge, he perves on Hannah (who is VERY much underage). But before he can do anything, Ray is killed off by a ghoul-ish like boy. Imagine the cavemen from those old Geico commercials.

While Hannah’s boyfriend visits, he studies the photos of murdered family. In one of the family outside the house, he notices unusual: a boy in one of the windows. As he’s being killed off, Hannah goes back to the family’s things to do more research. She eventually learns that the first family had a son.

This son had agoraphobia. So obviously, he’s crazy and LIVES IN THE CRAWL SPACE OF THE WALLS. The family attempt to take on the man, and the police eventually shoot someone. Of course it isn’t the agoraphobic caveman, but one of his prisoners.

He then gleefully picks off all the family members. Even Hannah, who is also creeped on repeatedly.

Horror movies aren’t always the most…represntitve of mental illness. But this is not a 1970s shocker. This was made in 2016. But it’s not its idiotic grip on mental health that’s the most eye-roll inducing about htis movie.

This is a story you’ve seen a million times. And it hasn’t been done well here. There’s no suspense. It’s by-the-numbers, pervy and just…boring. What’s the point of creating something when you refuse to bring anything new to the table?

But I would have known all of this if I would have just checked IMDB first. Not sure if that’s a lesson to really take away. Though I’m not really sure I can stomach another one of these.