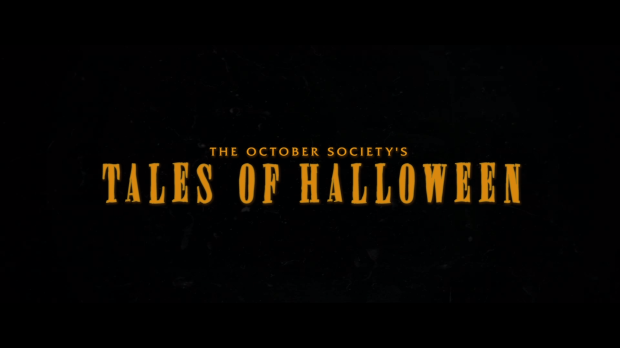 As always, the day snuck up on me faster than I could imagine. It’s been a heck of a month, so it was really nice to just sit down and watch something with some good Halloween spirit. Unfortunately for me, I chose Tales of Halloween.

Anthologies are, at the best of times, a mixed bag. There aren’t very many anthologies that I’d flat-out say I enjoy, let alone enjoy it from start to finish. Tales of Halloween is even more ambitious than the usual, as there are ten short stories! Not only are there ten films from ten different directors, but several are connect with a fairly-similar style throughout.

But when that style isn’t to your taste, it makes for a very bumpy hour and a half.

While made in 2015, this movie feels much more dated than that. Think “punks” in bad wigs listening to bad pop-punk and women in very short costumes (including one meant to be underage). And a very random cameo from Adrianne Curry. I mean, who even remembers her? These things are just…well, I’m bored by these things. It felt much more 2005 than 2015, and I had to double-check my dates again just to be certain.

There were a couple stand-outs in the pack, for me. First, I love the insanity that was “Friday the 31st”, written and directed by Mike Mendez and Dave Parker. The opening sequence is of a woman in a Dorothy costume running from a Jason Vooreehs-like killer. After the girl dies, an alien stops by planet Earth for trick-or-treating (because of course).

When the alien doesn’t get a treat from the killer, it becomes angry and possesses “Dorothy”. The killer gets his own when he must face a Deadite-style Dorothy in combat. It’s completely nuts, but it’s also hilarious and works quite well.

Otherwise, there were a lot of lows. Again, I don’t think it’s necessarily because they’re bad. They just aren’t my thing. 100% not my thing. There were some segments that irritated me so much, I would have loved to fast-forward them. But I didn’t because I’m a champ (also it might not far to judge things otherwise).

A lot of the themes overlapped, and I get it. There’s a great gag about creepy children and children getting scared or killed. But it was slightly overkill that six of the ten went this direction. So it’s not really surprising that the ones that didn’t go this route were the more interesting ones (though not necessarily for the better).

There’s a lot of cameos here, which is fun to see. Landis, Barbeau as the DJ, Dante, and everyone’s favourite camper Felissa Rose. But my favourite part was the inventive animated title sequence. Whoever did those did a fantastic job. Some of my favourite credits I’ve seen in a long while!

On a different note, one of the biggest disappointments was that there were only two women writing or directing in this project. Two. Perhaps if there was more of a diversity in directors, the stories would have felt a little more unique.

That being said – Halloween is nigh! May it be full of ghouls, goblins and trick-or-treats.