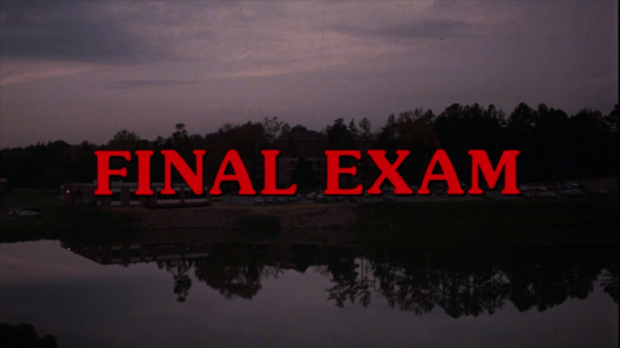 It has come to a point in my life where I’ve asked myself, “Have I watched too many 80s slasher movies?” After watching Final Exam, I’m leaning towards “yes”.

There is nothing wrong with this movie. It’s not even the straw to break the camel’s back. But at some point during the course of these 90 minutes, I realised I’m a bit over the formula.

While one of the earlier Halloween knock-offs, Final Exam easily fits into the slasher mold. A group of students at Lanier College are preparing for their final exams of the school year.

During a chemistry exam, a fraternity stage a mass shooting ‘prank’. The frat boys involved receive no punishment when their coach steps in to help them against the sheriff. It’s ok, though, as the real joke will be on them.

Afterwards, one of the frat’s pledges, Gary, is asked to break into a professor’s office and steal the exam. He does so quite easily, but is then hazed by his potential brothers. He’s tied to a tree in his underpants, freezing in the cold. After an age, he’s finally released – by a motiveless killer.

After Gary’s death, his fellow frat brothers are killed off, as are the nerds and girlfriends. None of the deaths are particularly interesting or gruesome. The death in the gym reminds me of a very tame version of Killer Workout or Fatal Games (both of which were much more fun and memorable) – but was easily the best bit of this movie.

Then we reach our final girl: Courtney. We don’t know anything about her other than she’s insecure because her roommate is really confident. Courtney finds everyone on the campus is murdered, and the sheriff sure as hell isn’t about to arrive and help. She’s eventually chased throughout the school and escapes to the top of the school’s clock tower.

During the ensuing scuffle, the killer falls from a height, seemingly dead. When Courtney attempts to escape past time, he grabs her – forcing her to stab him ’til he’s real dead.

There’s never a backstory given to the killer, only that he killed at another university before attacking Lanier College. In some ways, I could see where this angle could really work. It’s why I love Black Christmas. But mystery doesn’t have to mean boring.

Perhaps I need a long break from the genre. Or next time only seek out something with a very serious reputation (whether that be good or bad).

Final Exam is by no means bad. It certainly tries to do something a little different with its frat-boy shenanigans. (Though those have, unfortunately, aged very poorly.) Personally, I didn’t care about any of the characters other than the nerdy Radish. They weren’t likeable or dis-likeable enough. And if you aren’t cheering or mourning the deaths, what’s the point?

This all being said – I’m always a sucker for an 80s slasher movie. I’ll probably be here again next week with another one…