It’s (finally) February, which means Women in Horror Month is here again! This month-long initiative works encourages people to learn and shout about women working in horror industries. Check of their official website to learn more about the various celebrations happening this month and their own database.

Women are an integral part of the history of horror. We’re writing the classics, taking centre stage in the films, filling spots in special FX classrooms. And what women also do is direct one hell of a movie.

I love the horror community. As far as genre fans go, we’re the best (I’m not biased – just 100% spewing facts). But we always need to work on being more inclusive – especially for fans just getting into the genre. Whether you’re old or young: everyone has got to start somewhere, right?

So here is my list of must-watch films for anyone wanting to dip their toes into the genre, and want to start at a place in command of a woman.

This is by no means a comprehensive list! Keep in mind I still have a lot to learn and watch! I’m greatly biased towards older films, and most (if not all) of the films on this list are created by white, English-speaking women in the West. My goal is to watch more diversely moving forward – so send me all the recommendations!

This slasher trilogy is (to the best of my knowledge) the only horror series to be entirely directed and written by women. While the title might fill some people’s imaginations with -ehm- fantasties, this series is actually much smarter than that.

While the first one comes off as a straight-forward slasher on the surface, it’s filled with plenty of symbolism. That’s only heightened in the second one – making it the smartest of the three entries.

Fans of the series are constantly bickering about which of the three is best. It’s ridiculous because part two is clearly the superior. This is the hill I’m willing to die on!

2. The Wind (2018): written by Teresa Sutherland and directed by Emma Tammi

One of the most frequently-visited themes in horror is motherhood. The Wind shows what happens when that journey is taken from someone who desperately desires it. It’s a story of betrayal, paranoia and loss. All set with the backdrop of some gorgeous, lonely American frontier.

This is a stunning, tragically over-looked period piece. If you like The Witch, you’ll like this because this is MUCH better. 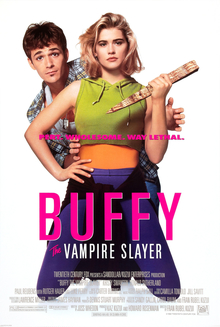 You know the story: she’s the chosen one – born to kill vampires. Only this early incarnation of Buffy Summers looks a little bit different. It’s brighter, more colourful and contains a whole lot of Luke Perry. So, yes, this is definitely the least “horror” of the films on this list. But there are vampires – so it counts, dammit!

It’s very well known to any fan of the Buffy TV show that the script was basically wrestled from Whedon’s hands and mangled. That being said, I quite adore the early 90s valley girl vibe. Kristy Swanson’s Buffy is very likeable and silly, but determined and smart.

This is one of my absolute favourite movies of all time. And while I adore the TV show, I still prefer the movie. Does that make me the only member of this club? Probably. But add this to the growing list of hills I’m going to die on.

4. The Babadook (2014): written and directed by Jennifer Kent

Another entry about motherhood and grief – only this time we face a picture book villain who is wrecking havoc on a mother’s mind.

Australian director Jennifer Kent has created a masterpiece of modern horror. One that has joined the ranks of classics we will remember for decades to come. Kent deftly handles of themes of loss while building a great sense of terror while telling the story of a widow and her young son.

The Babadook himself is now a cultural icon. One who has left out little realm of horror and entered into the mainstream. You might not have seen his movie, but you’ll certainly be familiar with his white face and top hat.

The pièce de résistance. The big kahuna. The movie that consistently shocks people (for some reason) when they learn it was directed by a woman.

American Psycho is about greedy, narcissistic men. Patrick Bateman (Christian Bale) is a banker, obsessed with himself, money, women and the desire to kill. As his thirst for success grows, he goes to further lengths to achieve his desires.

It’s absolutely classic for a reason. Every bit of this film is weird, wonderful and absolutely twisted.

UPDATE FEB 8: I forgot to mention Mirror, Mirror – it is excellent. Watch it now!!