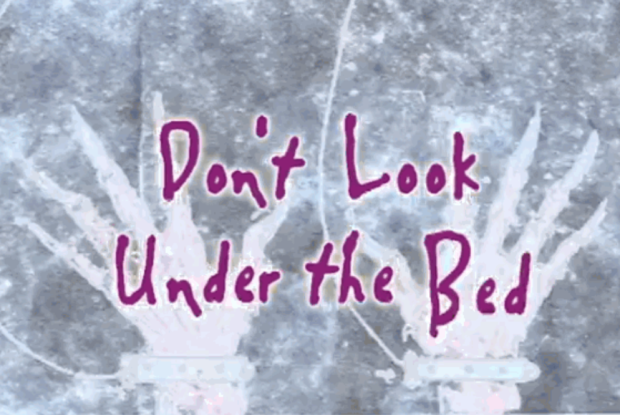 What a week it has been. WHAT A WEEK. All the worry and stress of the last few days has reduced me to watching yet another Disney Channel Original movie. When in doubt, check your mind out with a mindless movie, right?

Don’t Look Under the Bed is a movie I certainly remember existing when I was a kid. But upon watching it, I discovered I didn’t remember a thing about it.

It’s got all the usual makings of a Disney Channel ‘horror’ movie: there is vaguely creepy creature designs, a plucky MC who is a bit quirky, and the zany family that never existed on any plane of reality. There’s never any real terror, but it’s certainly enough to keep a kid up at night.

Frances is a smart, realistic girl. She believes in facts and all things proven. When strange things begin to happen around her small town, she tries her best to explain it away.

But soon Frances notices a boy around town. He continues to mysteriously appear and disappear throughout her day. When she finally confronts her, he seems surprised she notices him at all before vanishing again.

Frances eventually corners the boy and learns that he is Larry Houdini: imaginary friend. She realises that she is the only person who can see him. Stuck with the eccentric character, Frances learns that it’s the Boogey Man who is causing all of her problems. As things get stranger, Frances becomes the number one suspect in the pranks.

Larry admits to Frances that he was once her little brother Darwin’s former imaginary friend. Frances told Darwin to start believing in science and less imagination when he was diagnosed with leukemia.

Due to Frances’s meddling, Larry is slowing turning into a Boogey Man as well. When the Boogey Man takes Darwin, Larry and Frances must team up to go under the bed and get him back.

Under the bed (called Boogeyworld – a complete missed opportunity not naming it Boogeyland), the team come face-to-face with a Boogey Man. Once a frightened Darwin begs for Larry’s help, Larry returns to normal.

When the team return to the real world, they realise that the trouble isn’t quite over with yet.

This is a pretty cute made-for-TV movie. I can see why it is one of the more iconic ones of its era. These candy-coloured 90s movies are still pretty decades later. The solid practical effects and make-up stop it from looking too dated (but yes, it looks pretty silly in some bits).

Without having any nostalgia for the movie, I can’t say I genuinely loved it. But it is funny with some solid performances from Erin Chambers and Ty Hodges as Frances and Larry. I would certainly recommend it to anyone with a young family for Halloween.

Watching some of these wholesome children’s movies can be nice. It’s not going to change the world, but Don’t Look Under the Bed is a nice bit of wholesomeness if you’re brain is too fried.