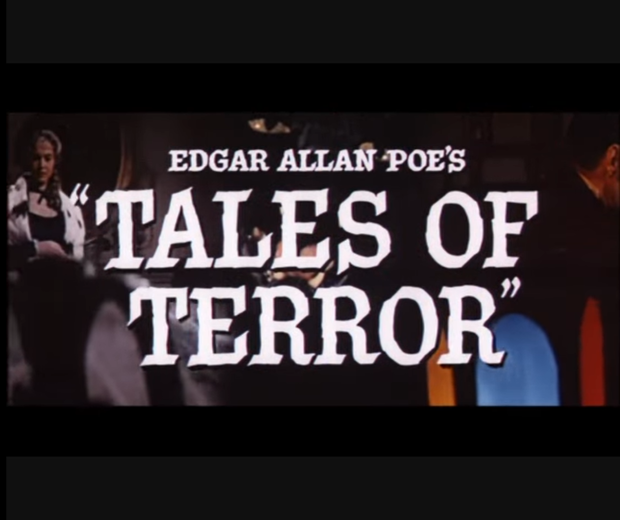 Hollywood is made up of great pairings. Fred and Ginger, Scorsese and DeNiro, Rebane and Wisconsin, and, of course, Corman and Poe.

I grew up with classic gothic films on television. And Corman’s Poe cycle movies were always on at some point. I love them. I love the drama, the gorgeous colours, and Vincent Price’s face around every corner. My husband bought me a collection of Corman and Price’s Poe movies for Christmas this year. So it’s been a blast revisiting them. But one I couldn’t recall as well as the rest was the anthology Tales of Terror.

Four of Poe’s stories are adapted here into three short films. Poe’s work is prime for adapting into an anthology. He only wrote one full-length novel, and his short stories are much more beloved and well known.

Interestingly, two of the stories here (“The Black Cat” and “The Facts in the Case of M. Valdemar”) were both used in the Dario Argento/George Romero co-production Two Evil Eyes. While I adore all three directors, I think Corman was much more successful at his attempts.

The first of the shorts, “Morella”, follows a young woman as she returns to see her father for the first time in over two decades. Her ornery father (Price) is cold towards her, believing her to have ‘murdered’ her mother in childbirth. It isn’t until the daughter reveals that she is terminally ill that her father warms to her. But it’s too late for them both, as she dies to have her mother’s corpse (which is lying on its deathbed) revived.

The second story combines two of Poe’s most well-loved, “The Black Cat” and “The Cask of Amontillado”. It’s easy to see why they’ve been combined here, both original stories end with people bricked up into walls. But screenwriter Richard Matheson and Corman add a humorous, almost farcical twist to the story.

Resident drunk Montresor Herringbone (Peter Lorre) and his wife Annabelle are in a loveless marriage. She tries to hide the money from him. He insists on spending it all when he can find it. But one night, after a wine-off with a famous wine-taster, Montresor has to be carried home. The wine-taster in question is Fortunato Luchresi (Price, again). Fortunato and Annabelle quickly fall in love.

But when their relationship is discovered, Montresor bricks them both up in his basement walls with Annabelle’s black cat. And like many of Poe’s stories, the insanity that comes with guilt only leads to dire consequences for our villain.

The last of the stories, “The Facts in the Case of M. Valdemar”, is easily the strongest. It’s a technicolour one-two punch.

M. Valdemar (Price, one more) is unwell, dying from a horrible disease. Hypnotist Mr Carmichael (Basil Rathbone) puts him under hypnosis. Even though Valdemar is somewhere between living and dying, Carmichael refuses to release him from hypnosis. This is, of course, to both torture Valdemar and steal his wife. Thankfully, seemingly even almost-death and hypnosis can’t stop a person from protecting the ones they love.

Tales of Terror isn’t Corman’s best work. But it is fun.

For me, the comedy didn’t work in the second segment. I know Corman enjoyed it, as he later used the same tone in The Raven (another adaption that doesn’t break into the favourites list). I do appreciate that it certainly prevents the movie from having a monotonous tone, but for the love of God – did the make-up artist really have to do that to the actors?

My favourite of Poe’s short stories is probably “The Cask of Amontillado”. I love its sinister, dark underground tones mixed with the jubilation of Carnival. And I have yet to find an adaption that is satisfying. While natural to mix it with “The Black Cat”, it’s still disappointing that it wasn’t given more use in the story.

As always, it’s worth watching these Poe Cycle films for the enjoyment of watching giant mansions in total desolation while Vincent Price crosses the screen in great costumes. If you’re a beginner, I wouldn’t start here (I would suggest House of Usher).

If you have any non-Corman adaptions of Poe that you love, please share! His grim tales are timeless and still are haunting to this day.