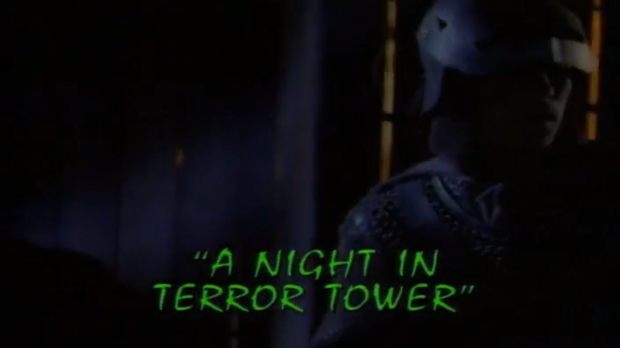 London, like all major cities, is full of tourist traps. But it’s also home to some of the most fantastic historical buildings. The Tower of London is one of them. The Terror Tower isn’t.

Goosebumps is always delightfully 90s Canadian. And it really shows its best side in “A Night in Terror Tower”.

This early Goosebumps episode from season 1 is an hour-long special hosted by RL Stine himself. The man has no charisma, yet always manages to come across as really likable? He’s quite the dude.

After his silly intro, the story begins about two young children visiting London with their parents. While their parents are away at a conference, the children join a tour group to explore the Terror Tower.

Before entering the tower, young Eddie sees a man waving to him, telling him to leave. When he points out the figure to his older sister, Sue, the ghostly figure has vanished.

As the tour begins, so to the strange going-ons. Sue tries to take a photo of Eddie, but sees one of the mannequins move through her camera’s viewfinder. Eddie finds a etching on the wall and another ghostly figure.

The two go to see the carving, which reads “LONG LIVE FREEDOM”. Before they can leave, a gust of wind surrounds them and a man in a big ol’ hat enters the room. They also realise that they’ve lost their tour group. The Man in the Hat begins moving white stones in his hand and reciting a spell, but the children abscond before he can finish his incantation.

The children manage to escape the Man in the Hat before he can catch them. They hail a black cab and head back into London. When the cab pulls up outside of their hotel, Sue realises she doesn’t have any pounds, only some old-ass coins.

The children hide from the cabbie, but are eventually caught and arrested by the Man in the Hat. He uses his magic white stones and takes them all back in time.

Sue finds herself in a Ye Olde village outside the Terror Tower without Eddie. She’s quickly picked out for looking strange. She tries to hide, but is betrayed by a village woman (whom she tried to pay off with the gold coins). Though she’s in the man’s grasp, she goes at least learn his identity: he’s the executioner!

The three are save in the nick of time.

As with many Goosebumps episodes, “A Night in Terror Tower” balances the humour and thrills very well. It’s a great episode. I do wish that the children spent more time in the tower and less time running around London. But it’s clear why this is one of the most well-loved episode of this series.

It’s a bit silly, but mostly the children are really compelling in their confusion and fear. And best of all, it allows your imagination to get the best of you. Which is really all you can ask from a children’s horror TV show.