Day three was a massive day for MCM Comic Con in London with several of the guests appearing in some of television’s biggest names like Game of Thrones, the DC universe, Agent Carter and for some thing a little closer to the UK – iconic science fiction television show Red Dwarf.

Sunday’s Game of Thrones panel was longer and filled with more guests than Fridays short Q&A. Joining Friday’s guests Ian Gelder and Ian Beatter were yet another Ian, Ian McElhinney and Eugene Simon. The four actors revisited their time on set as well as further explaining some of their favourite fan theories.

Gjokaj shared some of his favourite back scene moments with the fans, including several of the pranks he was subjected to and the ones he had a hand in (poor Dominic Cooper).

According to Gjokaj, the biggest pranksters at Agent Carter were the writers. They had a particular love of getting unsuspecting people to run into tape strips.

When speaking about the short-lived show Dollhouse, Gjokaj said he loved having the challenge of playing so many types of characters, something that he was grateful to have the opportunity to work with some talented writers. 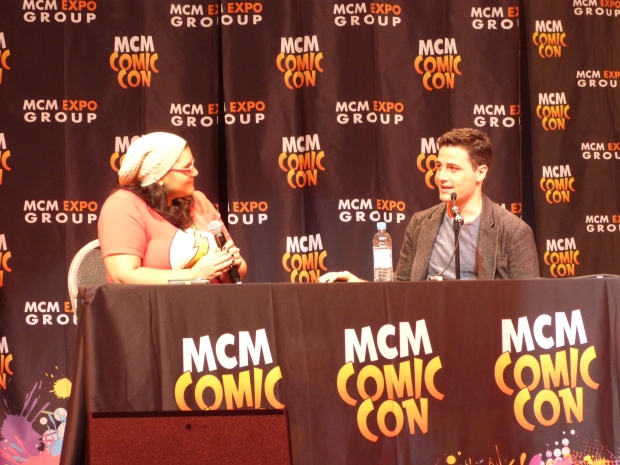 After Gjokaj, Battlestar Galactica star Jamie Bamber came on stage for his panel. Echoing what Gjokaj said, Bamber expressed how much he loved working with such great writers. Though despite much of his success coming from the small screen, the actor mentioned that he hoped to one day get back into stage acting, something that he considered his first love.

Like Edward James Olmos at the con last year, Bamber was really great with questions and fans. Although he said he didn’t want to recollect his time on set (he wants to be surprised when he revisits it with his children in the future), Bamber still gets a kick out of the word “fracking” despite the unfortunate contemporary meaning.

Following Bamber, two panels followed about three of televisions biggest shows. Flash actress Violett Beane was joined by surprise guest Michael Rowe, who played Deadshot in Arrow. But the big draw of the day was Red Dwarf, a panel that was only thirty minutes long. but was mostly photo-ops and an great excuse for actors Chris Barrie, Danny John-Jules and Hattie Hayridge to mess about together on stage.

It was a rather full day on Sunday and it was all great quality. A way to end another fantastic (and tiring) con on a high note.

Slideshow from this weekend’s MCM Comic Con London 2016 in October:

The cast and creators of Channel 4’s Humans.

MCM Comic Con London 2016 was sold out on Saturday