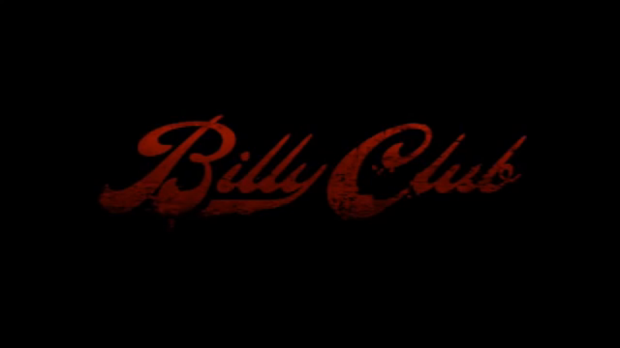 I don’t know about you, but I’m finding looking for a new place in London to be the largest pain in my ass. Many of you dear readers probably don’t have a clue what it’s like to look for a flat in London (neither did I until about a week ago), but it’s super intense. Gearing up for this big move meant that I’ve been insanely busy with that and various other projects and, well, my job that actually pays my bills. My husband and I have been so busy we forgot to watch the World Series. We watched a few of the play-off games, but everything else seemed to have slipped past us. And believe me, we are big baseball fans here and watched Brewer lose more games than is good for the soul.

So it seems only fitting that this week’s movie is rather baseball themed. Billy Club is a film that doesn’t beat around the bush.

Billy Club is set in the small town of Two Rivers in Eastern Wisconsin in the year 1996. Bobby Spooner comes into the local bar where he runs into some former classmates like the barmaid, Alison. The movie takes no time in introducing two utterly obnoxious characters (Kyle and Danny), both of whom used to play little league ball with Bobby. The weekend the gang all meet up to play ball is “the 15th anniversary” of the gruesome deaths of a former coach and teammates. The deaths were all pinned to another one of their teammates, Billy.

Meanwhile, there is a killer on the loose. He’s a bat-wielding catcher taking out kids in an old photo one-by-one. It seems inevitable that our four main characters are up to bat at some point (yes I know, but it’s not any worse than the actual dialogue). They make matters worse for themselves by taking a trip up to a cabin in the woods, but Billy ruins everything by getting pulled over for drunken driving.

Kyle and Alison decide to go into the cemetery where the fallen teammates reside while Danny returns to the cabin alone. Kyle accidentally falls into grave that has been dug up, and he immediately blames Billy and his supposed release from the mental hospital for it. And suddenly things take an interesting turn. Kyle and Alison begin to have an argument about guilt over what happened all those years ago. Of course they’re vague on details, which makes it pretty heavy on intrigue.

Come morning, Danny is still alone and eats all of Alison’s “boomers” – mushroom laced chocolate. There really isn’t any point to this whole subplot, but it does begin to trigger some memories of guilt that he still has over neglecting to stop Billy from being bullied when they were on the team together. Local Crazy Jo arrives to harass Danny (mentally?) about how he “didn’t do anything.” It doesn’t take long until Danny becomes the next easy target.

In a flashback, the little ones are shown harassing Billy, who is tied up and sitting in a dunk tank. Each member of the team takes a turn trying to hit the ball on the target (and man do the suck), but Alison is the only one who refuses to throw. Hopefully her life is spared in the end.

Billy Club is a better movie than I probably deserve right now, but unfortunately it takes too many random turns in subplots for this to be as enjoyable as it could have been.  As we find out, Kyle has a little crush on Bobby. After trying and failing to make a move, it’s Kyle’s turn to run out into the woods alone. He falls into a murky pond that actaully feels like a throwback to Bog, which I really hope is what the creators were going for here. But it appears as though Bobby is first.

And then there’s still a half hour left of the movie. It seems strange that the “Final Girl” is, well, final so early on. But there are so many unexpected bits here at the end that I hardly want to give it away when Billy Club is well worth watching yourself.

There really is nothing better than enjoying a movie a lot more than you expected to. I would gladly recommend Billy Club to any fan of the slasher would be pleased to watch. It’s gory, fun and pretty clever minus it’s brief lapses in judgement, but I really think the writers and directors (Drew Rosas and Nick Sommer, who plays Kyle) really had fun with this. It all feels like a love letter to Friday the 13th without treading on the story’s toes.

One added bonus is that this movie has some really excellent poster artwork. Check out the movie’s website to take a peak. They really are wonderous.