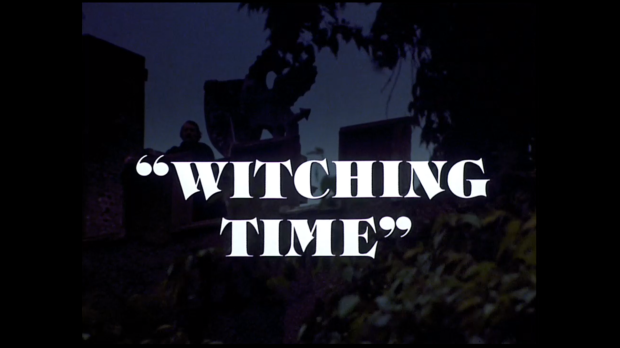 So maybe one week doesn’t count as “more”, but either way – I can’t say this has improved perceptions. I tried to ease myself in with an episode from Hammer House of Horror, an hour-long anthology show that aired in 1980. Hammer, historically, has never worked for me as much as the Universal films. So why did I think this would work?

Magenta herself appears in this first episode – as a witch! Which sounds so far up my alley, I was convinced it was going to be a sure win. But of course it’s another pointlessly long, meandering piece of work.

And let’s get the inevitable out of the way: I am American and I like my entertainment entertaining. May there be unnecessary explosions, dramatic staring and baffaling one-liners.

But at least it had Patricia Quinn. And she’s so great in this.

Film composer David lives with his actress wife Mary on a rural farm in England. The two have a strained relationship, mostly because David suspects she’s cheating on him and she definitely is. With his doctor.

After getting a call that Mary won’t be returning for the night, David settles in to work. But a sudden storm knocks the power out. When he goes to the barn to check on Mary’s horse, he finds a naked lady (Quinn) in a cloak.

The cloaked nutter introduces herself as Lucinda. She seems pretty happy to be at the farm, exclaiming that she’s escaped “them.” Assuming she’s ill, David takes Lucinda to the farm house. She tells him that she was born there, so he shows her around. Her behaviour is strange, though.

She’s terrified of the lights. And wonders at the running water in the bathroom. Asks David what people do to witches in his time. Eventually, Lucinda explains to him that she was born in 1627. She escaped her would-be executioners with magic by transporting herself into the future. And with that tidbit, David locks her away in the guest room.

He calls his doctor (the man who Mary is having an affair with), and invites him over to check on Lucinda, who he merely assumes is delusional. But when the doctor arrives, Lucinda is nowhere to be found. The doctor instead treats David, who has previously suffered from nervous exhaustion.

That night, David dreams he is having sex with Lucinda, who claws her nails into his back. When Mary arrives in the morning to check on her husband, she sees the nail marks in his back.

Things begin to get worse for the couple. As David becomes increasingly erratic, Mary becomes more and more paranoid that he’s after her. After she’s nearly crushed by a bust, she begins to pack up to leave David. Lucinda uses her powers to create a wind storm within the bedroom.

Mary decides then to not leave David, but to visit a priest who tells her about exorcisms. She also finds Lucinda’s name in the church book as one witch who escaped her death. She asks her doctor-lover for help, but he’s gives that a solid pass.

Equipped with the power to remove Lucinda, Mary begins to head back to the farm. But her horse startles, and Mary is thrown and knocked out. When she awakes, she finds out that she’s been in the hospital for days.

When Mary finally is able to leave the hospital, she finds David in terrible shape. He locks her in the cellar where Lucinda was once kept. While Mary tries to escape, David begins building a pyre to burn his wife to the ground.

But Mary manages an escape, and takes Lucinda on directly. Using Lucinda’s voodoo doll, Mary begins to attack the witch, but eventually drowns her in a trough. David then wakes up from Lucinda’s spell. The couple walk away, and David throws the doll onto the burning pyre, and Lucinda’s screams are lost to them.

It’s a very convoluted ending to a rather straight-forward plot. Instead of giving any suspense, the episode mostly is shrug-inducing. It is neither good nor bad but just mostly boring. Quinn’s witch character was compelling to watch, but her story was very flat. I’m not quite sure what the episode should have focused on more, but it needed to be focusing on something.

Unfortunately “Witching Time” is ultimately a product of an over-ambitious script for a one-hour show. Too much telling, and not enough showing.

So did I enjoy this episode? No. Do I want to watch more of this show? Well, yes.