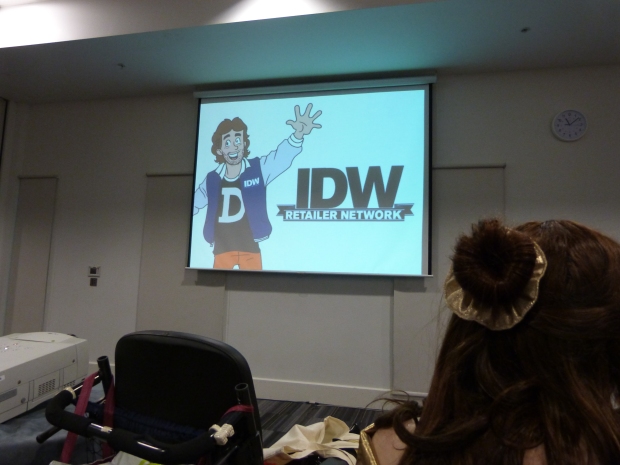 VP of Marketing at IDW, Dirk Wood, and Comic Book Legal Defense League Fund deputy director Alex Cox ran the panel with a presentation before a Q&A. Wood introduced a number of new books. The big announcement for IDW this weekend was their procurement of the Action Man rights, which was news warmly received by the overwhelmingly British audience.

Also announced were the new Micronauts comic and the Star Trek Starfleet Academy, a title aimed at the young adult demographic. A second Orphan Black book is also in the works with the title “Helsinki”, which any Orphan Black fan who has watched Season 3 will fully understand the meaning. They also spoke about the Star Wars Artist’s Edition that is due to be out later this year. The book will include scans of originals artwork. Artwork that had to be hunted down by buyers from years past.

Amelia Cole artist Nick Brokenshire and comic book writer M Zachary Sherman joined the panel to lend their advice to aspiring comic book creators. In a world that is increasingly open to new comics, Brokenshire and Sherman encouraged the hopefuls to begin creating their own work not only to share it within the industry, but to also use options such as crowd funding as a way to get comics off and running. 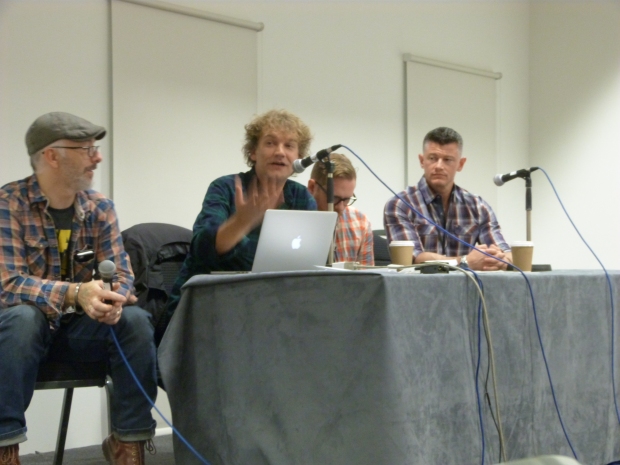 When asked about the new Jem and the Holograms movie that was released this weekend and it’s relationship with the well-received comic, Cook seemed tight-lipped other than saying that they were not approached for anything related to the movie from Universal.

Sherman further explained that several titles are more tightly controlled, like his America’s Army comics. But Wood and the other panelists sang praises of artist Sophie Campbell, who will be returning as artist for issue #11 with Dark Jem.

The group also spent time talking about the ups and downs of comics. There was a general agreement that the constant restarting a comic series may change the way classic characters once were, but that the comic scene has never been more diverse and inclusive.

For a laugh, the group also included some dream crossovers like the Teenage Mutant Ninja Turtles with Daredevil. Wood explained that at IDW they usually think tank great ideas. When he was working at Dark Horse (where he was for fifteen years before he moved to IDW five years ago) that’s where he saw the birthplace of the idea for Alien vs Predator.

Wood also mentioned that his dream books would be Goonies or Gremlins. IDW spent nearly five years trying to procure the rights to publishing the Back to the Future comics. Hopefully Gremlins will be just around the corner because there’s probably no publisher who could do it better.

Back to the Future issue #1 was released on Wednesday and is in stores now. All attendees were given a copy with an Artist Edition variant cover by Dan Schoening. 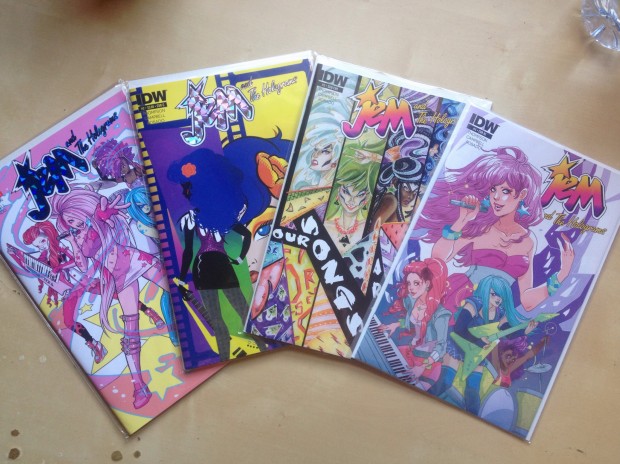 Something happened a few weeks ago that rocked the world of every Jem fan: that movie trailer was released. Some were pretty upset, while others were just bewildered. What was given was a one-dimensional coming-of-age fart fest. Definitely not a film anyone would want to see and definitely not about Jem, surely. Though, I say there is hope.

When I wrote about the film back in May, I gave a passing mention that IDW was currently publishing a Jem comic saying it was worth checking out. After issue #4 came out on the 24th, I still stand by that claim, but now with a little more emphasis because this comic is SO great. Out of the series I am currently reading, this is one that I genuinely can’t wait until the next issue comes out. The book is

Now I have to admit, I was a little put off by the art when I saw it. Everything was so bright and colourful my mind somehow translated that into meaning there would be a ‘silly and senseless’ story. I do love it when I’m wrong. Once I dipped into the story I completely understood Sophie Campbell’s art and why it worked so well (and it’s insanely beautiful). Because remember what the theme song told us:

And excitement, adventure, and all the fashion is all there. But of course there isn’t a straight re-hash of the cartoon. Be thankful for that. Kelly Thompson has taken the story forward in re-invented it in many ways. I’m not going to promise that this will be everyone’s cup of tea, but personally I find it a refreshing way to look at several characters who have been around for so long.

While watching a YouTube review of the trailer, one woman pointed out that there isn’t a single woman on the writing or production team for the movie. That’s pretty damn sad for a movie with a cast that is almost entirely women. No one is going to say that is has to be all women, but hello? No women? Fear not! IDW has struck a great balance of equality and talent – how it really should be.

Thankfully, the delivery is both sweet and exciting – very much like Christy Marx’s original characters. But everyone is updated to present day with new tastes and full personalities.

If you’re interested in starting the comic, there are have been loads of re-prints that are sure to be easy to find. I picked up a “Plugged in Edition” of issue number one just a couple weeks ago. I’ve genuinely enjoyed reading this series and really recommend it to both Jem and non-Jem fans alike. There are so many fun variants it’s a bit difficult not to go totally nuts and buy them all. It sure beats moaning about the movie.

Issue #5 should be out by the end of July.

For Three years and 65 episodes, Jerrica Benton and her friends transformed into a stellar band of pop stars – all with the help of a hologram computer and badass earrings. It was strange and dreamy and something that could have only been created in the 80’s. For many Jem was a shining beacon of everything cool.

That’s a lot of hard work for one 80’s pop star. After years of hard work being an absolute icon (reruns continued into the early 90’s), and creating generations of dedicated fans, Jem and her band the Holograms received their first live action movie. Last week the first trailer premiered and… it was this:

Well, at least there should be a trailer released for a movie about Jem and the Holograms, but where that trailer is is a complete mystery. The trailer that was uploaded couldn’t possibly have anything to do with the iconic TV show. There are no Misfits, Eric Raymond is now a woman, there isn’t even a hint of original music (which would be ridiculous for a movie about a band). This packet of questionable material certainly leaves a lot to be desired. A lot.

Putting the Jem title on this is a bit insulting to fans. Fair enough if you want to make an uninspired, crap movie but if you claim something is based on a certain content, make sure it is there in some form or another. While it might seem like a lot of hoopla over a movie and a cartoon, people have to remember that this was a character who broke a lot of barriers. She was a young woman who could do everything: she could balance being in charge of a foster home and be a CEO of a record company.

“I think you have to see the movie to understand. You can’t put it all in the same movie, and I feel like it really does set it up in a cool way. I think a lot of the things that people think are missing are in there. You just have to see it to understand. You can’t put the whole movie in the trailer. I want people to see it so they can see it’s a heartwarming story,” she continued. “It’s a beautiful coming-of-age story about family, but the music is incredible and it’s really our rise to fame and then after that… I think it really needed to set up the story before we could get into everything.”

First off, isn’t the purpose of a trailer supposed to bring hype and excitement? Shows what people know…

But so much for girl power. Heartwarming and coming-of-age stories are so rare these days, right? Angst has its place, but it certainly doesn’t in a story about Jem. Girls need all types of women to look up to, and denying them a character that has power and talent is actually really sad. This is clearly a movie targeted at teen girls and probably not the 30-year-old fan demographic. Even still, it’s a bit insulting of the writers and anyone else involved to think that this is all young girls can handle.

But reminisce about the good old days because there is no way anyone could compete with Britta Phillips.

There is also a really cool IDW comic based on the show going on right now. Check that out to see how adaptions should be done.