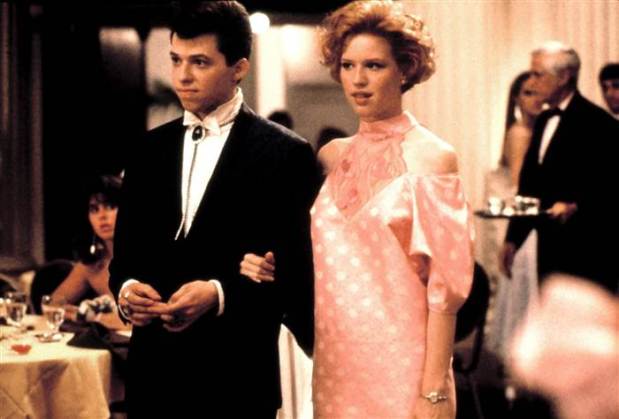 John Hughes’s classic Pretty in Pink turned 30 on February 28th. That’s 30 years of one boy dancing in a record store, another boy named Blaine (like an appliance), movie history’s worst prom dress and some of the most classic tunes ever tacked onto an 80s soundtrack. As we toast in celebration to the classic 80s movie, it’s also a time to reminisce about that perfect soundtrack.

Hughes loves to have an iconic song to close out his films. Simple Minds in The Breakfast Club with “Don’t You (Forget About Me)”, Sam and Jake sharing a kiss in Sixteen Candles to the Thompson Twins’ “If You Were Here” and, of course, OMD’s “If You Leave” filling the final dance scene in Pretty in Pink. The strings in OMD’s single are instantly recognisable, and so synonymous with the film it was written for.

And, of course, there’s that opening tune:

The original single “Pretty in Pink” preceded the film by nearly five years, first appearing on Psychedelic Furs’ second album Talk, Talk, Talk. Though the soundtrack would feature a much different version, fairing much better in the charts with a movie being named after it. It would help create one of the best opening montages of the 80s. And really, getting-ready montages are one of the best things about 80s movies.

But Pretty in Pink lives on beyond its two best-known tracks. The well-constructed soundtrack includes some of the biggest names of new wave and indie of the time like The Smiths, New Order and Echo & the Bunnymen. Even still there are more subtle songs to enjoy like Suzanne Vega’s song with Joe Jackson, “Left of Center”. John Hughes fingerprints are all over it, despite director Howard Deutch originally wanting to include more theme music.

Imagine a movie about a girl who works in a record store not having a killer soundtrack.

These songs not only work within the realm of the film, but it plays like a soundtrack hand-picked by Andie Walsh herself. It’s easy to feel Duckie’s heartbreak in “Please, Please, Please Let Me Get What I Want” or the pain felt in everyone in the love-triangle in Belouis Some’s “Round, Round”.

Though this soundtrack is lovely in each of its tracks, it’s safe to say the movie is truly made complete with the songs that are not included: Talk Back’s “Rudy” serves as some of the coolest “live” act music included in any movie, Andie’s dance with Iona is absolutely touching while The Association’s “Cherish” plays airily around them, and last but certainly not least is Otis Redding’s “Try a Little Tenderness” playing during Jon Cryer’s lip syncing scene in TRAX.

Pretty in Pink is such a wonderful film worth celebrating on its own. It is truly a story about teenagers having to make some of their first tough decisions, and facing the stereotypes that the world will love to place on them. But it’s also a movie about finding your self-worth. And every song there will help you find your way. 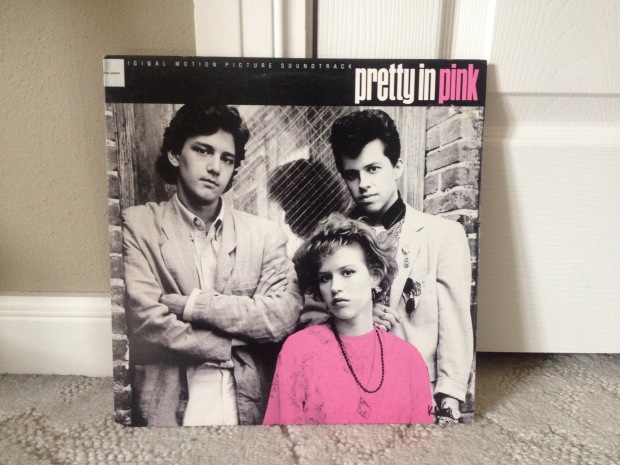 From the opening drums on “If You Leave” to the closing trembles of the mandolin on “Please Please Please Let Me Get What I Want” the soundtrack for Pretty in Pink is front to back everything I love.

There’s something to be said for a record you can share your soul with. I know that’s a statement most people wouldn’t allow for a compilation soundtrack, but many of John Hughes’ soundtracks were different than most. Each was like a love letter to his movies and characters that could be shared with fans.

As a teenager, I deeply related to Andie Walsh. Not the whole “being torn between two men” thing (because let’s face it, I was no Molly Ringwald when I was 17), but the sort of inability to fit in knowing you were destined for something better. As the Suzanne Vega song says, “f you want me you can find me / Left of center off of the strip / In the outskirts and in the fringes / In the corner out of the grip.” It takes an outsider to know one. Plus she worked at an ultra-cool record store.

In 2012, there was a special Record Store Day release that was numbered and came on a bright pink vinyl. It’s super lovely, but unfortunately this isn’t it. I do have some comfort in knowing that if I was a teenager in 1984, I would still be buying this copy. This specific copy was found in an antique mall – just peering from the stacks waiting for me to pick it up. I had been a massive fan of the movie and its soundtrack and knew we belonged together.

And Jon Cryer’s Duckie remains to be the ultimate in cool/’we’re pretending he’s actually a dork.’ I know I’m married and everything, but this character still remains one of my biggest crushes. As I watched this movie growing up, I knew I needed to be with someone who loved Otis Redding as much as I did. Found him.

The soundtrack is full of what are now considered many of 80s alternative staples like OMD, The Smiths, New Order and Echo & the Bunnymen. But in 1986, not many of these bands were massive names in the States. John knew what songs would help create the character of the music-obsessed Andie: all the must-haves with the carefully selected odd track by fringe bands like Belouis Some.

This particular record holds such a part in my heart. Even though I’ve grown a bit older, this still sounds how it feels to be…me.

I was definitely born in the wrong era. 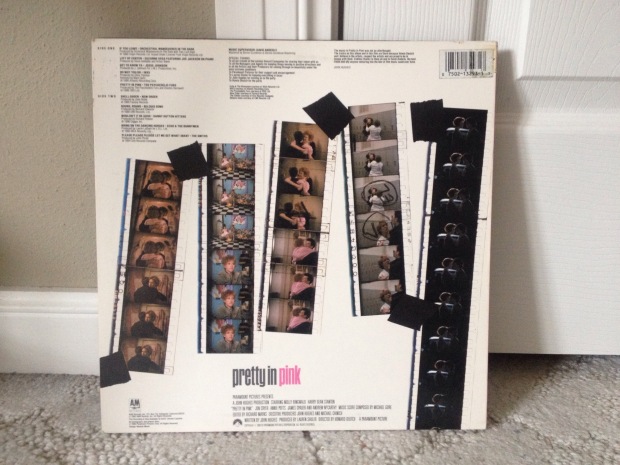