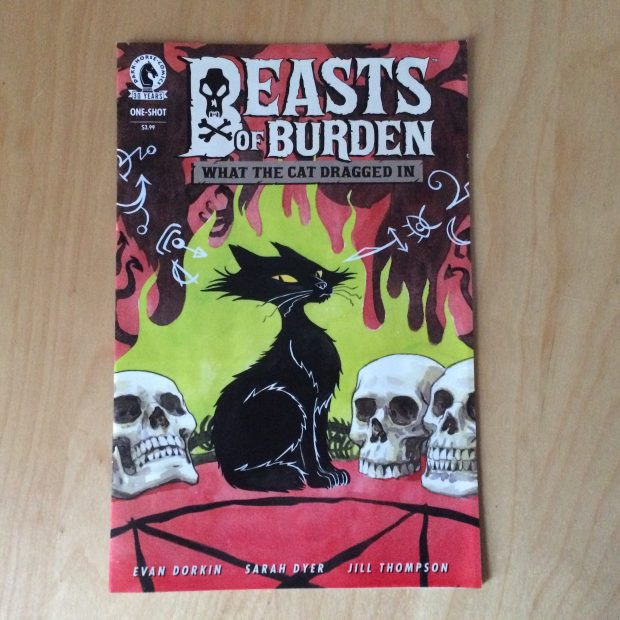 Beasts of Burden: What the Cat Dragged In is a one-shot comic from Dark Horse is that both creepy and exciting.

The Beasts of Burden series has won both the Eisner and Harvey Awards. What the Cat Dragged In is the first installment since 2014. The series is about a group of cats and dogs that protect their home of Burden Hill from the paranormal. Writer Evan Dorkin and artist Jill Thompson return with Sarah Dyer co-writing.

The newest story opens with Scout and Orphan as they investigate Dymphna, whose coven was taken out by Orphan and the wise dogs destroyed them. Dymphna surprises them and explains that she has been trying to get access to the house where her familiars used to live, but has been unsuccessful.

The three cats seek the assistance of Hoke, a raccoon who will be able to open the door for them. Hoke is a fantastic, light comedic relief in a darker story of magic and witchcraft. Plus he’s a raccoon. Hoke eventually gives in to their requests and helps them enter the home where Dymphna’s familiar and her partner lived.

Inside they find the house in a poor state; it’s covered in mold and rot. But they proceed down into the depths of the home where Dymphna faces two cats who were a part of her coven. They are alive only in the fact that the Harrow she summoned are making them suffer. They kill themselves only to be brought back every time.

Dymphna has to face the choices she’s made and pay the consequences. While her friends are spared, she makes a deal with the harrow that finally breaks the hold it has over the other members of her coven. While she survives, they finally move on. Her quest for vengeance eventually leads her to loss.

What the Cat Dragged In is my first experience with this series, but it seems to be a pretty great entry point. The premise certainly sounds a bit silly, but it’s treated with a dark and mature flair that makes this story rather good. The best stories are layered with lessons and pain, and What the Cat Dragged In manages that in only a few pages.

I love Thompson’s artwork as her painting style seems to capture the emotions of these animals and gives them genuine personalities. This one-shot really perked my interest in this world that Dorkin and Thompson have created. I’m hoping to be able to pick up some collected editions in the near future.

Pointless side-note: I love seeing the vintage Dark Horse logo on these comics this year for their 30th anniversary. I need to pick up some of the variant issues, especially Joelle Jones’s cover for the first issue of Tomb Raider. Not that I’m into Tomb Raider. But still. It’s gorgeous. Also speaking of Jones, the next series of Lady Killer has officially been announced for August! Wahooo!!